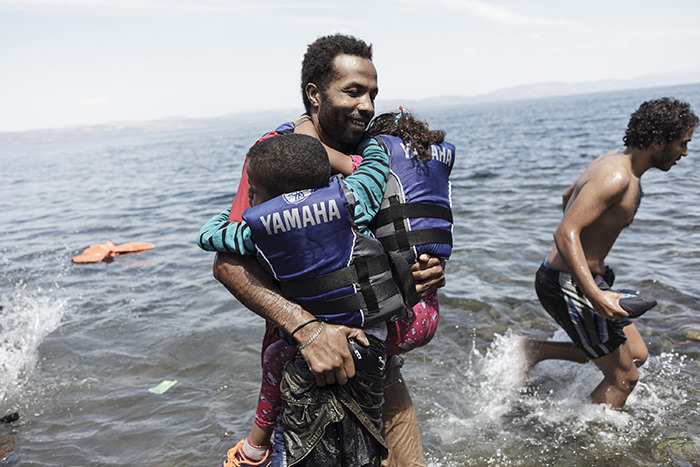 A migrant carries his two children as he gets off of an inflatable boat after arriving on the Greek island of Lesbos after crossing the Aegean sea from Turkey to Greece on August 14, 2015 (AFP Photo)
by Aug 15, 2015 12:00 am
At least 40 migrants have died after apparently getting trapped in the hold of a boat in the Mediterranean, the Italian navy said on Saturday.

The victims had suffocated, Italian news agency ANSA reported. Navy spokesman Costantino Fantasia said the boat was carrying about 300 migrants when it ran into difficulty off the coast of Libya.

He said the dead were "presumably in the hold" but details were not clear because the rescue mission was still going on. Fantasia said the boat carrying the migrants had not capsized.

The naval vessel Cigala Fulgosi was leading the rescue mission and had saved many other people, he said.

Last Tuesday, up to 50 migrants went missing when a large rubber dinghy sank in the Mediterranean Sea and nearly 2,000 have been picked up this week. Around 200 migrants were presumed killed earlier this month off the coast of Libya when their boat capsized.

The Mediterranean has become the world's most deadly crossing point for migrants.

More than 2,000 people fleeing war and poverty have died this year in attempts to reach Europe by boat, compared with 3,279 deaths during the whole of last year, the International Organization for Migration said last week.

People smugglers, mostly based in lawless Libya and charging thousands of dollars for passage, have sent more than 100,000 migrants by sea to Italy so far this year, according to an Interior Ministry tally. Italy took in 170,000 in 2014.