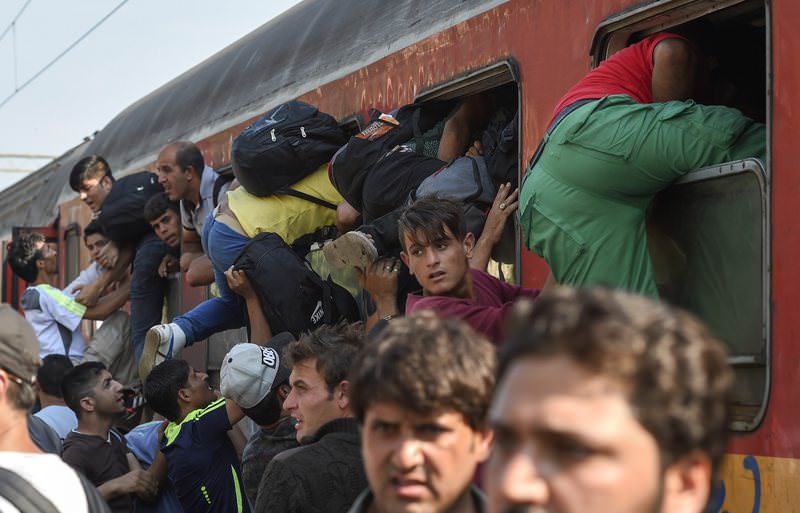 by Aug 18, 2015 12:00 am
A record number of migrants were tracked entering the EU in July by irregular means, official data showed on Tuesday, reaching 110,000 as the influx continues, notably of Syrians reaching Greek islands from Turkey.

The European Union's border control agency Frontex said that it had detected some 107,500 people arriving outside regular channels in July, a sharp increase on the previous record set in June of over 70,000, and more than three times as many as it registered in the same month last year.

The most active frontiers were those of the Greek islands in the Aegean off Turkey, where nearly 50,000 people were recorded arriving by sea, mainly on Lesbos, Chios, Samos and Kos.

Nearly 340,000 such migrants were seen so far this year arriving in the EU, mainly in Italy, Greece and Hungary. That was a 175 percent rise on the same period last year and much more than the 280,000 registered arrivals in all of 2014.

Other EU data shows 625,920 people claimed asylum in the bloc last year. Frontex officials were not immediately available to comment on how far the increase in numbers being detected may be a result of increased monitoring of the frontiers.

In Germany alone, which recorded 203,000 claims last year, officials expect to register some 750,000 refugees this year.

"Syrians and Afghans accounted for a lion's share of the record number of migrants entering the EU illegally," Frontex said in a statement. "Most of them, fleeing instability in their home countries, initially entered Greece from Turkey."

Frontex Executive Director Fabrice Leggeri said: "This is an emergency situation for Europe that requires all EU member states to step in to support the national authorities who are taking on a massive number of migrants at its borders."

Italy detected more than 20,000 migrants last month, bringing the total number to 90,000 so far in 2015, most coming by sea from Libya. Some 90 percent of those are Africans, mainly from Eritrea and Nigeria.

Hungary reported detecting more than 34,800 people in July crossing its borders from non-EU states, notably via Serbia, on the frontier with which Budapest has begun building a fence.

Hungary will soon send thousands of policemen to its southern border to help secure it, a top government official said on Tuesday.