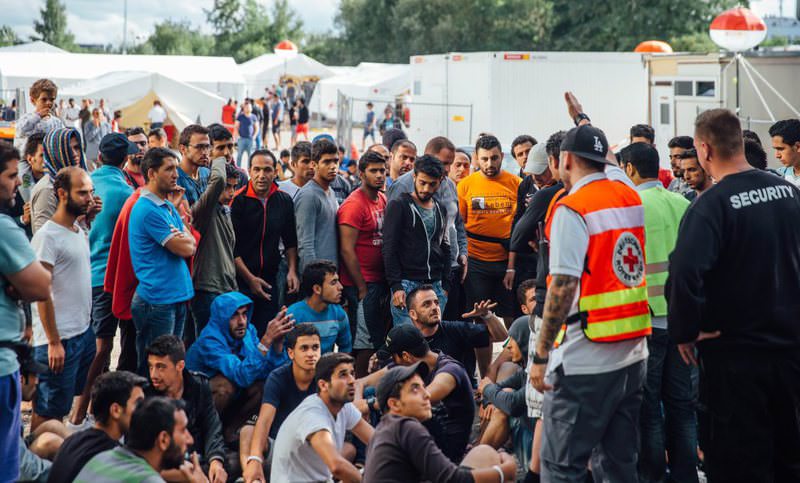 Refugees gather for a sit-in at the entrance of refugee camp in Dresden, Germany
by Daily Sabah with Agencies Aug 18, 2015 12:00 am

German Chancellor Merkel condemned the surge of attacks on refugee shelters, which not only put migrants under pressure, but also spark tension between those who are against the arrival of refugees and those who support them

Amid increasing xenophobia and racially or religiously motivated attacks, Chancellor Angela Merkel condemned a surge in German attacks on refugee shelters and warned that the issue of asylum could become a bigger challenge for the European Union than the Greek debt crisis.

Asked about more than 200 arson attacks against homes for asylum-seekers seen in Germany this year as the country faces a record influx of refugees, Merkel said: "That is unworthy of our country." Merkel warned that waves of refugees would "preoccupy Europe much, much more than the issue of Greece and the stability of the euro."

"The issue of asylum could be the next major European project, in which we show whether we are really able to take joint action," she told ZDF public television.

For Germany, where some officials have said the number of asylum-seekers could top 600,000 this year, Merkel said the issue posed particular challenges. With thousands of refugees sleeping in tents and authorities saying they are overwhelmed with applications, Merkel said the current situation was "absolutely unsatisfactory." She called for the European Union to establish a list of safe countries of origin, where citizens are not under threat of violence or persecution.

Last week, Germany's interior minister said it was "unacceptable" that 40 percent of asylum-seekers in his country were from the Balkans, calling it "an embarrassment for Europe." About half of Germany's 300,000 asylum applications since January have come from the southeast European region that includes Albania, Bosnia, Bulgaria, Croatia, Kosovo, Macedonia, Montenegro and Serbia. Berlin is looking at ways to deter such claims in order to better serve people from crisis zones such as Syria, Iraq and Afghanistan. The U.N. refugee agency has said the number of people driven from their homes by conflict and crisis has topped 50 million for the first time since World War II, with Syrians hardest hit.

Last week, German authorities refused a provocative demand from a far-right party to carry out a public "inspection" of a holding center for newly arrived refugees, prompting a court case Thursday. The anti-foreigner National Democratic Party (NPD) only has seats in one of Germany's 16 state assemblies and none at federal level. Its five legislators in the state of Mecklenburg-Vorpommern demanded access to the Nostorf center, which has exceeded its capacity of 650 refugees.

The increase in xenophobic attacks has been visible in other parts of Europe, too. Danish police said Sunday they had arrested a man on suspicion of torching a mosque in Copenhagen earlier in the day. "At 11:31 am, the police were informed that a man had started a fire by throwing a flammable liquid ... at the Muslim center," a police statement said. The fire, which caused only superficial damage to the outside of the building, was quickly contained, police said. The suspect, who was born in 1980, will appear in court on Monday. The religious association whose members worship at the mosque, denounced the fire as "an act of terrorism" on its website. This act "was likely the result of political and religious motives... As tragic at it is, it unfortunately does not surprise us," the center said.

Out of Denmark's population of 5.7 million, 9 percent are foreign-born, of whom some 296,000 originate from "non-Western" countries, official statistics show. In June, the anti-immigration Danish People's Party became Denmark's second largest party, securing 21.1 percent of the vote, its highest score ever.

Earlier in this month, a senior United Nations official warned that Britain risked a "xenophobic response" to the migrant crisis in the French port of Calais after Prime Minister David Cameron promised to deport more migrants who enter Britain illegally. Demands for the British government to keep out economic migrants are "a xenophobic response to the issue of free movement," Peter Sutherland, the U.N. secretary-general's envoy on international migration, told the BBC. Facing a "very testing" situation, Britain will deport more illegal migrants "so people know it's not a safe haven," Cameron told reporters in Vietnam. He said Britain and other European nations faced a "swarm of people coming across the Mediterranean, seeking a better life." But Sutherland said such claims were "exaggerated and calculated to inflame tensions with regards to the numbers trying to come into Britain."

"Last year the total approval of refugees coming into France was 68,000, which is more than twice the figure of the U.K.," Sutherland told Irish broadcaster RTE, emphasizing that there should be a fair allocation across the EU countries. The increasingly violent and chaotic situation in the Middle East has led many people to flee the conflict in an attempt to seek security and shelter in more prosperous and peaceful countries in Europe. Considering the sharp increase in the number of migrants trying to reach Europe's border, EU policies on migrants have been accused of undermining the value of human life while imposing strict measures over search and rescue operations.
RELATED TOPICS