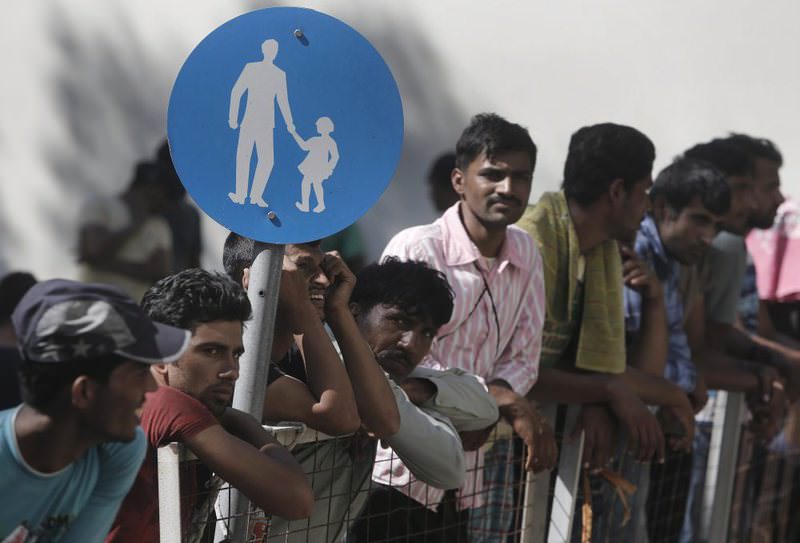 Pakistani and Afghan migrants wait for registration procedures outside the police station on the Greek island of Kos.
by Daily Sabah with AFP Aug 20, 2015 12:00 am

A record 107,500 migrants crossed the European Union's borders last month, according to new figures Tuesday, showing they are arriving in dramatically increasing numbers and creating a humanitarian crisis for the 28-nation bloc.

EU border agency Frontex reported that its latest figures far outstripped the previous monthly record in June of 70,000. During the first seven months of the year, there were nearly 340,000 migrants, up from 123,500 during the same period last year, Frontex said. "This is an emergency situation for Europe that requires all EU member states to step in to support the national authorities who are taking on a massive number of migrants at its borders," Frontex director Fabrice Leggeri said in a statement.

Germany alone expects as many as 750,000 refugees to seek asylum there this year, according to media reports. The U.N. refugee agency said in the last week alone, 20,843 migrants - virtually all of them fleeing war and persecution in Syria, Afghanistan and Iraq - arrived in Greece, which has seen around 160,000 migrants land on its shores since January, according to the U.N. refugee agency. "The pace of arrivals has been steadily increasing in recent weeks," UNHCR spokesman William Spindler told reporters in Geneva. But the wave of migrants has impacted Europe from its southern islands to the northern countries.

Germany, as Europe's economic powerhouse, has become the refugees' top destination, with one in three who arrived in the EU last year seeking asylum there. According to a report in the Handelsblatt newspaper, Berlin expects up to three-quarters of a million to apply for asylum in 2015. U.N. refugee chief Antonio Guterres called Tuesday for more solidarity among European countries in taking in asylum seekers, insisting it was "unsustainable" for Germany to take in the majority of refugees.

France and Britain meanwhile were preparing to sign a deal this week to try to alleviate the migrant crisis in the northern French port of Calais, where thousands of people desperate to get to Britain through the Channel tunnel have gathered. And there is no sign the flood of migrants into Europe will subside.

Some 250,000 migrants have already crossed the Mediterranean this year to Italy and Greece, and the International Organization for Migration said Tuesday it expected that number to pass 300,000 by the end of the year. The ones who make it to shore are the lucky ones, with 2,440 people having died trying so far this year, according to the UNHCR.

That number includes the 49 migrants asphyxiated in the hold of a ship carrying 362 people that sank at the weekend. Italy said Tuesday eight suspected people smugglers had been arrested. They are accused of condemning the victims to their deaths by forcing them to stay in the ship's fume-filled hold. Another five Syrian refugees reportedly died Tuesday and 24 were rescued when a boat overturned after leaving Turkey's Bodrum peninsula for the Greek island of Kos.

The surge in migrant numbers is most visible in debt-strapped Greece, which has largely failed to provide any support to the tens of thousands of migrants wallowing in squalid conditions. "For months, UNHCR has been warning of a mounting refugee crisis on the Greek islands," Spindler said, insisting the "reception infrastructure, services and registration procedures both on the islands and on the mainland need to be strengthened urgently."

Until recently, most migrants making the perilous journey across the Mediterranean to Europe travelled to Italy, but dangers and logistical difficulties have shifted the flood increasingly towards Greece. When the migrants arrive on the Greek islands, there is little if anything for them and most have been forced to sleep outdoors. The island of Kos, which last week witnessed chaotic scenes of overwhelmed police armed with truncheons beating back some of the thousands of people who had gathered there, has come to symbolize Europe's faltering response to the refugee crisis.

"The situation is still very complicated," UNHCR Emergency Coordinator Roberto Mignone told AFP on the island. He said the authorities' ability to process the refugees remained low, with some 1,750 people currently on the ferry and another 2,500 still on the island. An unprecedented spike in refugee arrivals has pushed the resort island of Lesbos to "breaking point," with some 2,000 people landing there every day, the International Rescue Committee warned on Tuesday.

The debt-ravaged country has said the huge influx is too much for it to handle alone and has pleaded for more EU help. The EU has approved 2.4 billion euros of funding to help member states cope with the flood of migrants, but UNHCR has urged more help from the bloc for Greece, pointing out that "the vast majority" of the migrants there will travel on towards northern Europe.

The increasingly violent and chaotic situation in the Middle East has led many people to flee the conflict in an attempt to seek security and shelter in more prosperous and peaceful countries in Europe. In a bid to issue a solid response to a global refugee crisis, European leaders agreed to a voluntary scheme aimed at relocating 40,000 migrants arriving in Italy and Greece among other EU countries to ease the load on the two southern European nations in June; however, they fell short of the target, only agreeing to relocate a little over 32,000 migrants among the EU's 28 members.
Last Update: Aug 20, 2015 4:24 am
RELATED TOPICS