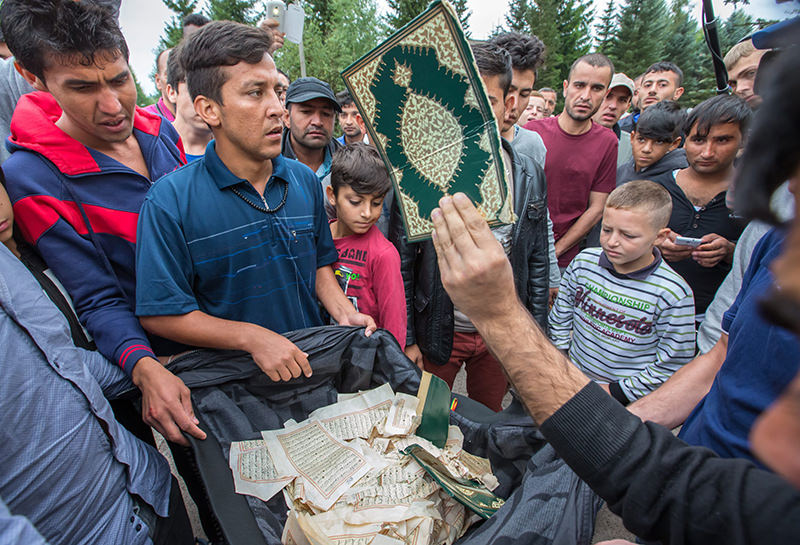 A torn Koran is presented as some refugees exclaim the expression 'Allah is great' in front of the refugee accomodation in Suhl, Germany, 20 August 2015 (EPA Photo)
by Aug 20, 2015 12:00 am
At least 10 people were injured in a riot at a refugee home in central Germany over a torn Qur'an, police said Thursday, in fresh tensions as the country prepared to host 800,000 asylum-seekers this year.

About 20 refugees in the shelter went in pursuit of another resident late Wednesday, accusing him of ripping pages out of a Qur'an, local police said.

The man was eventually saved by the shelter's guards as well as police, prompting the mob to turn their anger on the security forces.

About 50 people armed with steel rods began throwing stones at the officers, leaving at least 10 people including three police injured.

Windows were smashed, furniture was flung out of the windows and even dividing walls in the refugee shelter were hacked off in the rampage that lasted several hours in the town of Suhl.

Germany is struggling to accommodate a wave of asylum-seekers from war zones such as Syria but also countries without military conflict like Albania and Kosovo.

It was not immediately clear which countries the assailants or the victims were from.

The sudden surge in asylum demand this year has left authorities scrambling to find appropriate homes for the migrants, with schools and tents used as temporary shelter.

Authorities have raised concerns of overcrowding.