All 1,500 migrants allowed to cross border into Macedonia 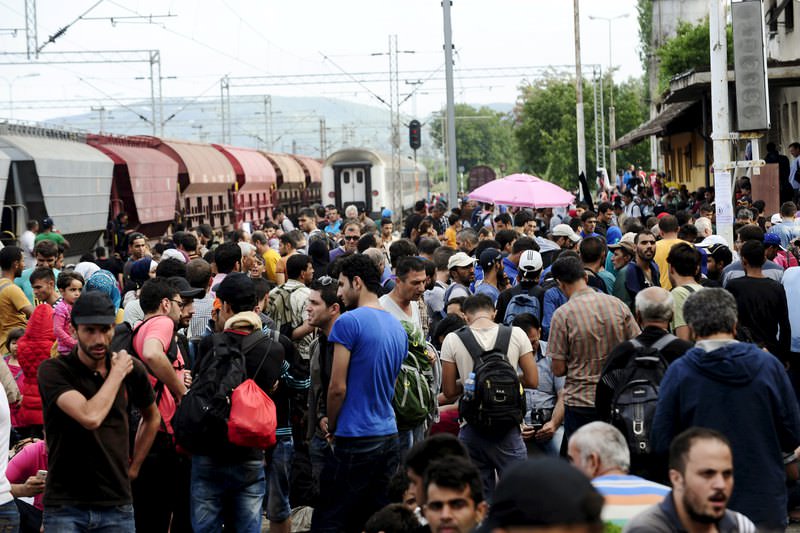 Migrants gather at Gevgelija train station in Macedonia after crossing Greece's border, Macedonia, August 22, 2015. (REUTERS Photo)
by French Press Agency - AFP
Aug 23, 2015 12:00 am
More than 1,500 mostly Syrian migrants, trapped in a no-man's land for three days, entered Macedonia from Greece on Saturday, after police allowed them to pass despite earlier trying to hold back the crowd using stun grenades.

The dash across the border was the latest dramatic chapter in Europe's migrant crisis, and came as another 3,000 migrants were rescued in waters off Libya -- in one of the largest single-day rescue operations yet in the Mediterranean.

Some 104,000 migrants and refugees have landed on Italian shores so far this year, while Greece has seen an influx of around 150,000 people, according to the International Organization for Migration. More than 2,300 people have died trying to make the dangerous journey.

On Macedonia's southern border with Greece, police had earlier Saturday used stun grenades and batons in response to hundreds of refugees trying to break through barbed wire fencing, before apparently deciding to let everyone cross into the Balkan nation, an AFP reporter saw.

By late evening not a single person remained in the strip of no-man's land at the border where more than 2,000 people, including women and children, had been stuck without proper shelter since Thursday.

Most of the migrants were headed straight for the station in the nearby town of Gevgelija in the hopes of catching a train towards Serbia, from where they aim to eventually reach the European Union to start a new life.

Macedonia declared a state of emergency on Thursday over the influx at its border and twice resorted to force to prevent people from entering in recent days, resulting in a few light injuries.

Thousands more refugees and migrants, mostly from Syria, Iraq and Afghanistan, are expected to arrive in Macedonia in the coming days after being ferried to the Greek mainland from the islands.

Macedonian police spokesman Ivo Kotevski said police did not want to use force but would seek to control the flow of arrivals.

"We will continue with reinforced control of the border according to the state of emergency and we will (in future) allow only a limited number of people into the country in accordance with the capacities we have," Kotevski told AFP by phone Saturday.

He said no more people would be allowed to enter until the current group had moved on towards the north, "or we will have a humanitarian crisis in Macedonia."

Fears of a humanitarian catastrophe also hit Italy on Saturday after the Italian coastguard was deluged with distress calls from 20 different fishing boats and rubber dinghies off Libya with around 3,000 people on board.

The rescue operations -- involving Italian navy ships, coastguard vessels and a Norwegian boat -- appeared to have passed off without any reports of casualties.

Italian police meanwhile said they had arrested six Egyptian nationals on suspicion of people smuggling following the rescue of a stricken boat on Wednesday.

Testimony from the 432 migrants on board suggest the vessel had been packed with more than 10 times the number of people it was designed for, with many passengers, including a number of women and children, locked below deck.

They had each paid the traffickers 2,000 euros ($2,200) for the passage from Egypt to Italy, according to statements given to police.
On board, the crew were reported to have demanded further payment to allow those locked in the hold to come up temporarily for air.

Humanitarian organisations say the surge in the numbers of people trying to reach European Union countries is the result of conflicts or repression in Africa and the Middle East.

They have called on European governments to shoulder more of the burden of absorbing the wave of asylum seekers and to help create safer routes for them to reach Europe.

The UN refugee agency (UNHCR) on Friday expressed concern over the situation on the Greece-Macedonia border and urged the EU to "step up support for countries affected" by the movement of refugees and migrants in southeastern Europe.

Some 42,000 people, including more than 7,000 children, have entered Macedonia from Greece since mid-June, the government in Skopje said.

On Friday night, the Macedonian police doubled the barbed wire fence at the border, while some of the refugees in a makeshift camp pleaded with them, shouting "Help us!"

"It rained and many people couldn't protect themselves. One mother lost her daughter and was calling for her all through the night," said Samer Moin, a 49-year-old doctor from Syria who crossed from Turkey to the Greek island of Halki, before arriving at the Macedonian border.

In the border town of Gevgelija, extra trains have been laid on to deal with the spike in passengers. It takes around four hours by train to reach Tabanovce on Macedonia's northern border with Serbia, some 180 kilometres (110 miles) away.

Once they reach Serbia, many migrants and refugees will try to make their way to Hungary, which is a major crossing point into the EU, although the country is building a four-metre (13-foot) barbed wire fence along its 175-kilometre border to stop the influx.