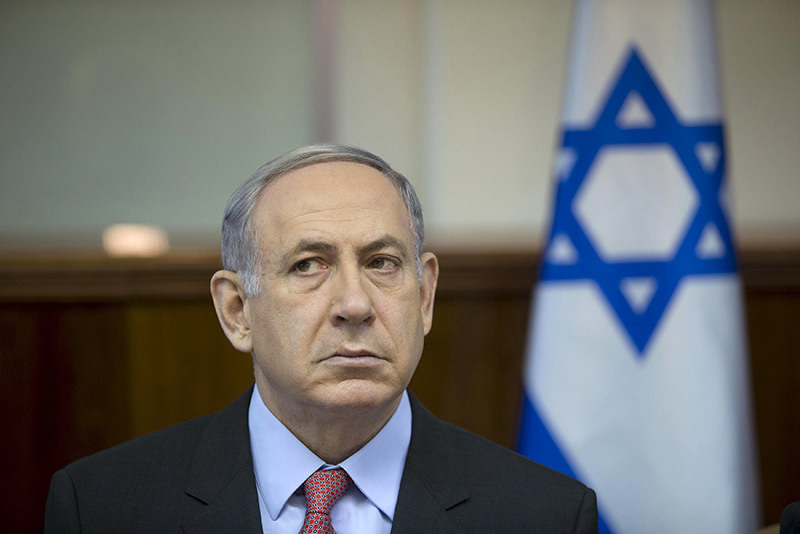 Israel's Prime Minister Benjamin Netanyahu attends the weekly cabinet meeting at his office in Jerusalem August 16, 2015 (Reuter photo).
by Daily Sabah with AFP Aug 25, 2015 12:00 am
By Monday almost 80,000 people had signed a petition urging the arrest of Israeli Prime Minister Benjamin Netanyahu for war crimes when he visits London next month. The petition was launched earlier this month by British citizen Damian Moran and is posted on the government's website.

"Under international law he [Netanyahu] should be arrested for war crimes upon arrival in the U.K. for the massacre of over 2,000 civilians in 2014," Moran said, referring to the 51-day offensive by Israel in Gaza last year. If the number of signatories reaches 100,000, the petition can be considered for debate in Britain's parliament. But Moran told media he doubted it would reach the chamber given the close relationship between Israel and Britain.

The British government was obliged to respond after the document received 10,000 signatories, saying that "visiting heads of foreign governments, such as Prime Minister Netanyahu, have immunity from legal process, and cannot be arrested or detained." "We recognize that the conflict in Gaza last year took a terrible toll," it added.

Britain is pushing for a two-state solution to resolve the Israeli-Palestinian conflict and "will reinforce this message to Mr. Netanyahu during his visit" in September, according to the response. Any British citizen can launch a petition on the government's website, asking for a specific action from the government or parliament's lower House of Commons. Only British citizens are meant to sign the petitions, but need only enter a name, email address and valid postcode. Israel launched military action in the Hamas-ruled Gaza Strip on July 8 last year, leading to the deaths of more than 2,000 Palestinians and 66 Israeli soldiers.

According to the U.N. Human Rights Council, of the 2,251 Palestinians killed in the conflict, 1,462 were civilians. In the Office for the Coordination of Humanitarian Affairs' (OCHA) 2015 overview it was also stated that 472 fatalities came from 142 families who suffered the loss of three or more family members in bombings of residential buildings. The Gaza Health Ministry and UNICEF reported that from July 8 to Aug. 2, 2014, around 315 Palestinian children were killed by Israeli action in Gaza and added that 30 percent of civilian casualties were children.
Last Update: Apr 26, 2016 10:45 pm
RELATED TOPICS