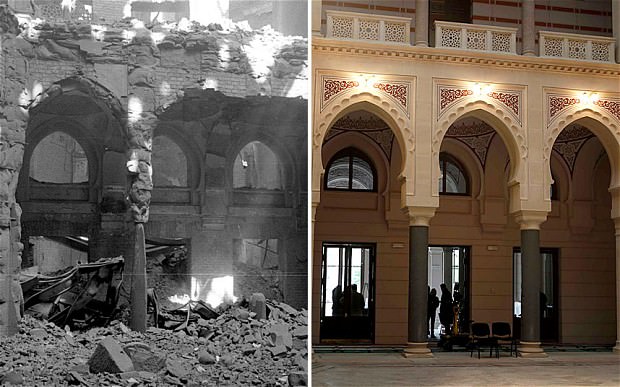 by Abdullah Kızıltaş Aug 26, 2015 12:00 am
Over 23 years have passed since the burning of the Vijecnica Library dubbed as 'Bosnia's memory', after Serb artillery destroyed the former city hall.

Artillery fire by Chetniks resulted in severe damage to the area of the library. The fire claimed over 155 thousand books, including manuscripts and destroyed nearly 2 million pieces of wiritngs.

A high representative for Bosnia and Herzegovina said about the burnt books, "Our history was in the books. We must protect them. There will not be a repeat of this incident."

Restoration Coordinator for Vijecnica, Admir Dedovici said, "Bosnia and Herzegovina and Sarajevo's symbol the Vijecnica library was renovated and reopened on May 9, 2014. It took 18 years of restoration work and it is again the symbol of Sarajevo."

The library was built in the back of Bascarsija during the Austro-Hungarian Empire, between the years 1892-1894. It was used as a City Hall for many years. After the year 1949 it began service as a national library.

The library holds about 6 million books including, Bosnian, Serbian, Croatian, and among them also the manuscripts of the Jews, in its national archives.
One of the city's most important historical and cultural heritages, the Vijecnica anniversary memorial event has not yet been held.