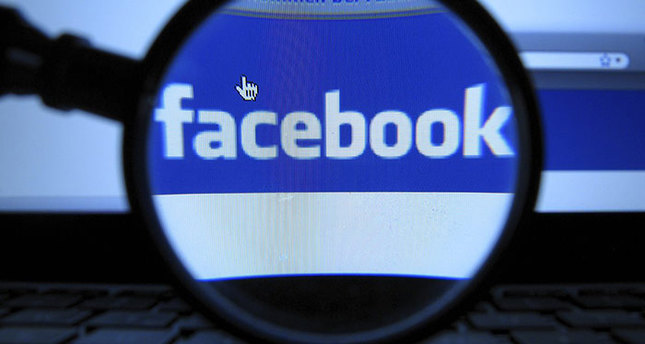 A magnifying glass is posed over a monitor displaying a Facebook page in Munich (AP Photo)
by Aug 27, 2015 12:00 am
Germany has urged Facebook to censor racist chat, prompting the world's biggest online social media company to say Thursday that it took such concerns very seriously.

Rightist and racist groups in Germany who often accuse media of shutting out their views have developed deep networks on Facebook where multitudes of "friends" tap "like" to support derogatory statements about the thousands of refugees arriving every day.

Justice Minister Heiko Maas wrote to Facebook's German and European chiefs asking for a meeting on September 14 on the issue.

"Facebook users are complaining that your company, despite concrete complaints, is not effectively preventing racist and xenophobic posts and comments," he said in the letter obtained by dpa.

He said the users had often received replies that certain comments were not in breach of Facebook's community standards.

Facebook told dpa it would meet with the minister. "We welcome the letter and we take these concerns seriously," a spokeswoman said.

She said racism clearly breached Facebook rules, adding, "We appeal to people not to use our platform to spread hate talk." Facebook did not say whether or not it had accepted the date proposed by Maas.

The justice minister said certain comments he had seen were "evident" instances of the German crime of sedition, which includes spreading defamatory talk about an ethnic group. He said Facebook was legally obliged to delete statements that were illegal.

With Berlin saying it expects up to 800,000 applications this year for political asylum, equivalent to 1 per cent of its population, anti-foreigner groups have mobilized, mainly in eastern Germany, whereas the rest of the country has been more welcoming.

Germany has moved to quickly absorb new arrivals from Syria and other wartorn zones while urging arrivals from the Balkans to go home.

German law does not require online communities to filter chats, but it does oblige them to delete illegal material once the operating company's attention has been drawn to it.
Last Update: Aug 27, 2015 8:19 pm
RELATED TOPICS