Intra-party tensions increase in Greece's Syriza party ahead of polls 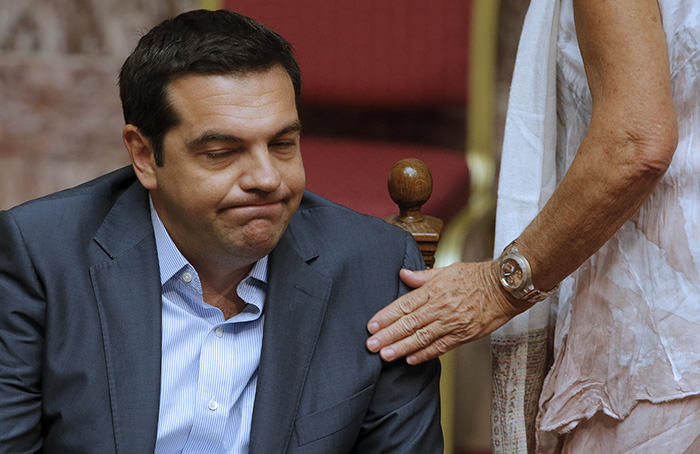 Greek Prime Minister Alexis Tsipras reacts as he attends a parliamentary session in Athens, Greece, August 14, 2015 (Reuters Photo)
by Anadolu Agency Aug 27, 2015 12:00 am
The split in Greece's ruling SYRIZA party has widened ahead of a general election expected to be held in September.

On Wednesday, 53 members of the party's central committee resigned, announcing their decision in a letter sent to Prime Minister Alexis Tsipras which was leaked to the press.

These party members belong to the so-called Group of 53, a faction formed in 2014 which is seen as less radical than the party's hardline Left Platform.

A number of the 53 have joined the new left-wing Popular Unity party formed by former energy minister Panagiotis Lafazanis.

Like Lafazanis, the group has declared its opposition to the Greek bailout: "As members of Central Committee we are unable to serve the new memorandum signed by Greece, which is delivering the killing blow to the Greek people," the letter said.

The new party, created only on Friday, already includes 25 members of parliament.

Meanwhile, Tsipras has declared that he will not work with opposition parties in contesting the election or in forming a new coalition.

Tsipras defended his decision to accept the three-year, ?86 billion ($95.5 billion) bailout agreement that is dependent on the government's enacting a series of far-reaching economic reforms.

He said the bailout deal "has problems, but also great potential. The alternative, an exit from the eurozone would have been an economic disaster".

The prime minister is still the most popular politician in Greece, with polls showing approval ratings at 61 percent.

"Tsipras is expected to win the elections with SYRIZA, but the party will not have a full-scale majority," political analyst George Kratsas told Anadolu Agency.

"The question is: Will SYRIZA be able to put together enough votes to put the remaining economic reform measures, imposed by the bailout, through parliament?"
Last Update: Aug 27, 2015 12:45 pm
RELATED TOPICS