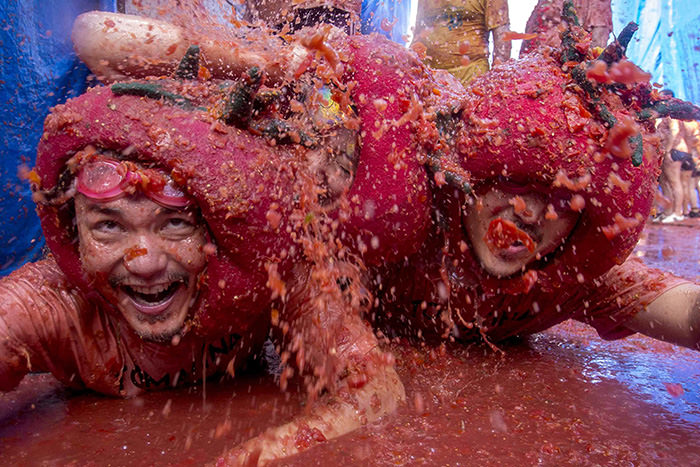 Revellers slide around in tomato pulp during the annual ,tomatina, festivities in the village of Bunol, near Valencia on August 26, 2015 (AFP Photo)
by Mehmet Çelik Aug 27, 2015 12:00 am
More than 22,000 people on Wednesday witnessed La Tomatina, a tomato fight festival celebrated in the eastern Spanish town of Bunol.

During the festival, which marked its 70-year anniversary, people squashed 150 tons of tomatoes dumped into the city's street, which creates a picturesque view of the town and turns participants red. The festival also draws tourists to the town and grasps the international media's attention. At times, although participants wear protection, there have been injuries during the chaotic tomato tossing. Despite its camera-friendly atmosphere, one cannot refrain from asking whether wasting 150 tons of tomatoes can be excused, particularly at a time when European states have been undergoing an economic crisis – which has led to austerity measures – the migrant crisis at the borders of European states, in addition to perhaps what now sounds like a cliché, the world's hunger and food scarcity issue.

When the European Union was hit by the 2008-09 economic recession, Spain was one of the hardest hit countries, which had to implement tough austerity measures that sparked nationwide protests and uprisings. According to statistics, 21.1 percent (2012 est.) of Spain's population lives below the poverty line. Although Spain has attempted to recover from the economic recession, unemployment is another economic indicator that has not been on the positive side in a long while (24.5 percent est. in 2014).

Secondly, as part of the EU family, Spain also receives its share of migrants escaping the war- and poverty-torn countries of the Middle East and North Africa. The wasted dollar amount for the 150 tons of tomatoes could easily be used for shelter, food and other expenses toward the migrant crisis that has been at the doors of EU states, particularly with the upcoming winter season. Couldn't they have at least built a refugee shelter for that amount of money spent on wasted tomatoes?

Lastly, according to 2015 statistics by the Food and Agriculture Organization of the United Nations, about 795 million people remain undernourished globally. The report by the FAO also indicates that "just over one in every nine people in the world is currently unable to consume enough food to conduct an active and healthy life." Think how much 150 tons of wasted tomatoes would affect such statistics, let alone using the money instead to build a food program in a part of the world where there is no food for consumption.

La Tomatina is a great example of Western consumerism and waste culture at a time where countries are being hit by war, economic crisis, and political conflicts that affect millions of people. The capitalist culture, which has spending and greed at the expense of others as its foundation, unfortunately leads to negative statistics, rather than prosperity all together, as it promises.

Meanwhile, millions of pumpkins are desecrated during Halloween, similar to wasted tomatoes, which could also be food for the hungry – and also food for thought in thinking about the consumerist culture of having "fun." The list of waste in such a culture can also be enriched by things such as thousands of Christmas trees cut down and decorated for a few days, or fashion, electronics …et cetera. retail-therapy shopping sessions...

La Tomatina is believed to have begun in August 1945, when a scuffle broke out between young members of a carnival crowd and fruit stalls were overturned. Dictator Francisco Franco tried to ban the tomato war for more than a decade, until it was finally made legal in 1957.
Last Update: Aug 28, 2015 1:00 am
RELATED TOPICS