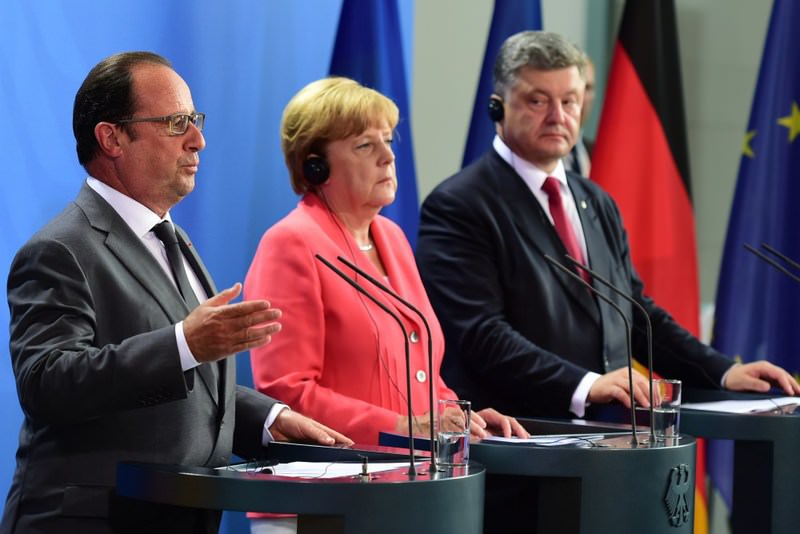 by Aug 27, 2015 12:00 am
Ukraine said Tuesday that the leaders of Germany and France had agreed to back "firm" steps against Russia should pro-Moscow rebels hold disputed elections in the ex-Soviet state's separatist east.

A top aide to President Petro Poroshenko said German Chancellor Angela Merkel and French President Francois Hollande had agreed at trilateral talks in Berlin on Monday to a set of "red lines" Russia must not cross. "European leaders agreed on a set of 'red lines' whose violation by Russia would prompt a firm EU response," Deputy Administration Chief Kostyantyn Yeliseyev told reporters.

"One of these lines is the fake elections that the (rebels) of Donetsk and Lugansk intend to hold on Oct. 18 and Nov. 1," he said in reference to the two separatist regions. "Russia must pressure its loyalists to cancel these so-called elections. They will not be recognized and only pose a serious threat to the Minsk (peace) process if they go ahead," he told reporters. Unceasing fighting has left in shambles a truce deal that Merkel and Hollande helped negotiate in the Belarussian capital Minsk in February.

A spokesman for the army in Kiev said four servicemen had been killed and 12 injured in mortar fire exchanges across the Donetsk area. "The situation is getting worse," Oleksandr Motuzyanyk told a daily press briefing. "The rebels' attacks have intensified." Pro-Russian militia commander Eduard Basurin told AFP that Ukrainian shells had killed one civilian and wounded another 12 in the rebels' de facto capital of Donetsk and their nearby stronghold of Gorlivka. The continuing violence brings to nearly 6,900 the number of people killed since Ukraine's industrial east was overrun by pro-Kremlin gunmen and what Kiev believes are Russian troops in March 2014. But the two EU heads of state still see the Minsk deal as the only solution to a conflict that has shattered Moscow's relations with the West and renewed fears of Russia's invasion of former communist eastern European states. The 13-point Minsk deal provides for "local elections in certain (rebel-run) areas of the Donetsk and Lugansk regions on the basis of the law of Ukraine and constitutional reform." But the insurgents have refused to have their vote coincide with regional elections that will be held on Oct. 25 in the rest of Ukraine.

They have further vowed to bar any pro-Kiev politician from running for office -- two conditions that have been rejected outright by Poroshenko but never officially condemned by Russia. Moscow denies sparking the uprising in reprisal for last year's unseating of a Russian-backed president by a pro-Western leadership that is seeking future membership in the European Union and possibly NATO. But Poroshenko said in an address marking 24 years of post-Soviet independence on Monday that 9,000 Russian servicemen were among the 40,000 fighters in the separatist force.

The U.S. State Department on Monday also insisted that it was "the combined Russian separatist forces, and not Ukrainian forces, who are initiating aggressive activities" that resumed with renewed vigor earlier this month. Existing EU and U.S. trade and other sanctions against Moscow have contributed to an economic slump in Russia that saw its economy shrink by 4.6 percent in the three months ending June.
RELATED TOPICS