A tsunami in Mediterranean Sea could 'swamp' Italy, Greece, Libya 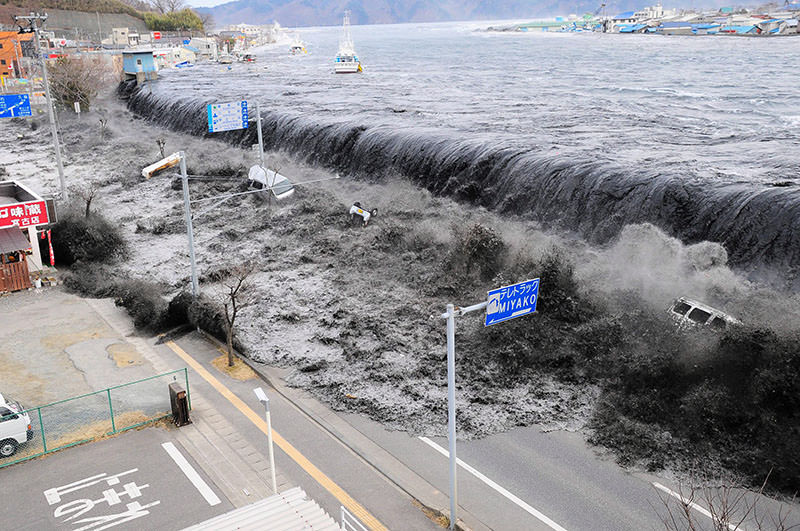 A file picture dated 11 March 2011 shows waves overwhelming a levee, swallowing a seaside village near the mouth of the Hei River, in Miyako city, Iwate prefecture, Japan (EPA photo).
by Daily Sabah Aug 28, 2015 12:00 am
It is not very frequent that tsunamis occure in the Mediterranean Sea, but there is still a chance if a strong earthquake strikes this region, according to experts. And if that hapens, the coastal regions of Italy, Greece, and Italy are at risk of being swamped, according to scientists who published their work in the journal Ocean Science on Aug. 27.

An eartquake of 7.0 magnitude off the coasts of eastern Sicily and southern Crete would would affect 130 million people and 'swamp' coastal holiday destinations, the research has suggested. The simulations of the scientists showed that the low-lying coastal areas would be inundated up to 5 metres above sea level, whereas 3.5 square kilometres of land in Crete would be under water.

The scientists believe that a more detailed assesment of coatal flooding risk should be conducted and that their study is only a starting point. The tam reportedly said, "Our simulations could be used to help public authorities and policy makers create a comprehensive database of tsunami scenarios in the Mediterranean, identify vulnerable coastal regions for each scenario, and properly plan their defence."

In 365 AD, a tsunami took place just off the coast of Crete following various earthquakes in the region, the largest of which had a magnitude of 8-8.5. The tsunami had killed thousands in the regions, destroying in the ancient cities in Egypt, Italy, and Greece.

Though not as frequent as in the Pacific and Indian oceans, around 10% of tsunamis occur in the Mediterranean, mainly due to earthquakes generated when the African plate slides underneath the Eurasian plate.

The most recent tsunami in the Meditterean Sea took place in 1907 followingn an earthquake of magnitude of about 7.0. The tsunami had hit Messina region in Italy, killing thousands.
Last Update: Aug 28, 2015 4:01 pm
RELATED TOPICS