Greece's new caretaker cabinet sworn in ahead of elections next month 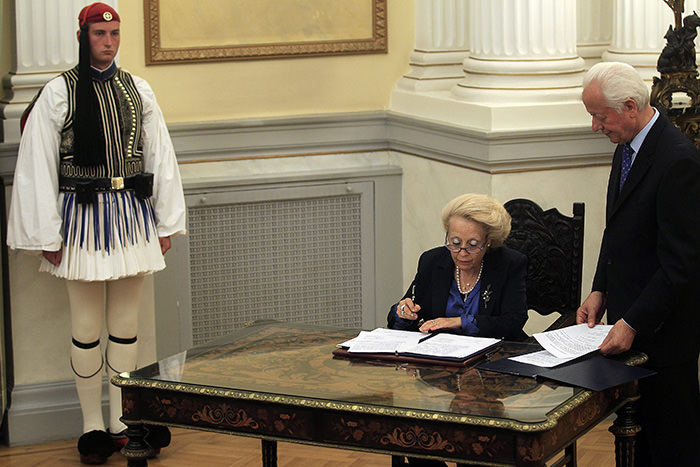 Greece's caretaker Prime Minister Vassiliki Thanou signs the protocol of the swearing-in ceremony of the new government's caretaker ministers (EPA Photo)
by Associated Press Aug 28, 2015 12:00 am
Greece's new caretaker government, led by the nation's first female prime minister, was sworn in Friday and headed straight into a cabinet meeting as the country faces an election next month.

Prime Minister Vassiliki Thanou, a top judge, and her cabinet will lead the country to elections on Sept. 20, following outgoing prime minister Alexis Tsipras' resignation last week. He stepped down after a rebellion by members of his radical-left Syriza party who objected to his agreement with the conditions of Greece's third international bailout.

President Prokopis Pavlopoulos and Thanou signed a decree Friday, the president's office said, officially dissolving Parliament, setting the election for Sept. 20 and the first session of the new Parliament on Oct. 1.

The new cabinet may be in power for less than a month but it will have to oversee the implementation of several of the austerity measures which are conditions of the new bailout.

The critical finance ministry post went to Giorgos Houliarakis, an academic who had been on Greece's negotiating team during talks with creditors, while veteran diplomat Petros Moliviatis was named foreign minister, a position he has held twice in the past including in the last caretaker government in 2012.

Thanou, the 65-year-old head of the Supreme Court, had been sworn in on Thursday.

Tsipras, who resigned barely seven months into his four-year mandate, has said he needs a stronger mandate to implement the tough austerity measures accompanying the three-year, 86 billion euro bailout.

Sixty-four percent said Tsipras was wrong to call the snap poll, compared to 24 percent who considered it correct. The remainder took no position or did not reply.

Although Syriza was still the most popular party, the poll showed its approval ratings sliding since early July, before a referendum in which Tsipras successfully urged Greeks to reject creditor reform proposals.

Those intending to vote for Syriza stood at 23 percent in the new poll, compared to 26 percent in an early July survey by the same company. The conservative New Democracy party stood at 19.5 percent, up from 15 percent in July.

The small nationalist Independent Greeks, Syriza's partner in the coalition government, were backed by 2 percent, below the 3 percent threshold needed to enter Parliament.

Tsipras has ruled out a coalition with any of the center-right or center-left parties if he fails to win a majority to govern outright, meaning he would face problems forming a government unless a party that didn't make it into parliament last time manages to win above 3 percent.

Support for remaining in Europe's joint currency remained high, with 68 percent in the poll saying they believe the country should remain in the euro even if it means further austerity and sacrifices. Forty-eight percent said the government got the best deal it could for the third bailout, while 45 percent disagreed.