Migrants race for Europe in crowds before winter 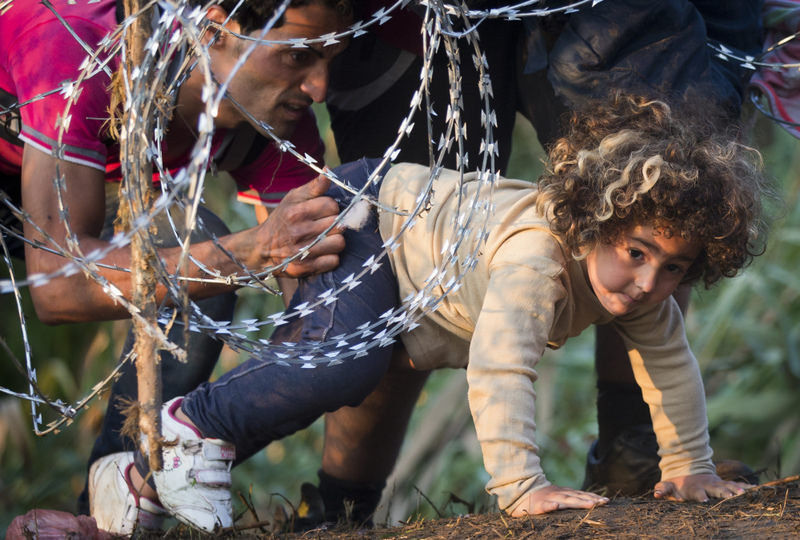 A refugee girl crawles under razor wire as she crosses from Serbia to Roszke, Hungary.
by Daily Sabah with Agencies Aug 28, 2015 12:00 am

As cold weather approaches, migrants, mostly from Syria, make for Europe before winter despite tight measures. Meanwhile, new migrant deaths have been reported as the EU still does not have a common response to the crisis

Over the last few weeks, non-EU Balkan countries such as Macedonia and Serbia have been dealing with much of the initial refugee burden. However, many of these migrants are only in transit to Western European countries, among them Germany and Austria. According to The New York Times, migrants in Macedonia told reporters that they were especially eager to move after Hungary said it would complete a dozen meter-high fences along its border with Serbia on Monday.

Yesterday, a summit of leaders from the western Balkans was held in Vienna attended by German Chancellor Angela Merkel. Serbia and Macedonia's foreign ministers called for EU action on Europe's migrant crisis at the summit. Both have become major transit countries for tens of thousands of migrants trying to reach the EU in recent months, with Macedonia last week forced to declare a state of emergency.

"We are faced with the biggest refugee crisis since World War II. It is a true migration of peoples and Serbia is a transit country," Serbian Minister of Foreign Affairs Ivica Dacic told a news conference at the event in Vienna. "This is a problem of the European Union and we [the transit countries] are expected to come up with an action plan," he said. "I think the European Union has to come up with a plan first," he said. "I have to be very direct here. We are bearing the brunt of the problem."

This was echoed by Macedonian Minister of Foreign Affairs Nikola Poposki, who said Macedonia is currently dealing with 3,000 migrants arriving every day from EU member Greece. "We are not going to do the job with the 90,000 euros ($101,000) that we have received so far and we are probably not going to reach the objective with the 1 million euros that have been announced," he said. "Unless we have a European answer to this issue, none of us should be under any illusion that this will be solved," Poposki said. "Now we will need to act, and probably with this Vienna conference we can … come to a solution that is a European one."

Meanwhile, EU member state Hungary, which is a member of the EU's passport-free Schengen zone and has become the bloc's main entry point for migrants arriving by land along the Balkans route, did not attend the meeting. The daily number of people crossing into Hungary hit a new high on Wednesday, topping 3,000, including nearly 700 children, police figures showed. Coming to the forefront with its harsh anti-immigrant measures, Hungary will debate next week whether to deploy troops to stem the influx.

Ahead of the conference, Austrian Minister of Foreign Affairs Sebastian Kurz warned that his country would consider introducing tougher anti-migration measures, including "much tighter border controls," if the EU failed to come up with a unified response. He spoke on the sidelines of a western Balkans conference that is primarily focused on ways of getting a grip on the migrant influx that threatens to overwhelm some countries while leaving others relatively unaffected. Kurz said there was no choice to "a European solution to this crisis." If not, he said, individual countries would act on their own and "endanger our European idea of open borders."

Alarmed by the growing humanitarian disaster, United Nations Secretary-General Ban Ki-moon has urged countries "in Europe and elsewhere to prove their compassion and do much more to bring an end to the crisis." U.N. refugee chief Antonio Guterres and French Interior Minister Bernard Cazeneuve, meanwhile, have called for the urgent creation of more so-called hotspots – processing centers to sort refugees fleeing war, from economic migrants simply in search of a better life.

With no common European response, governments have approached the problem in various ways. While Hungary's conservative government is building a 175-kilometer razor-wire barrier to keep migrants out – a decision criticized by its neighbor Serbia – Czech Deputy Prime Minister Andrej Babis has called for the EU's visa-free Schengen zone to be closed with the help of NATO troops.

Compared to Syria's neighboring countries, the U.N. refugee agency encouraged European countries to do more to share the burden of the international community in the migrant crisis. Even though the number of Syrians who have fled the war in their country has been increasing, the percentage of refugees heading to Europe remains small with only around 4 percent of Syrians having sought asylum in European countries. Syria's neighboring countries – Turkey, Lebanon, Jordan and Iraq – have over 3 million Syrian refugees, a number that is not comparable with the total number of Syrian refugees that have sought shelter in Europe. Ensuring access to asylum for refugees, including at sea and land borders, remains a significant challenge for EU countries as human rights organizations have urged EU member states to fulfill their international protection obligations.
RELATED TOPICS