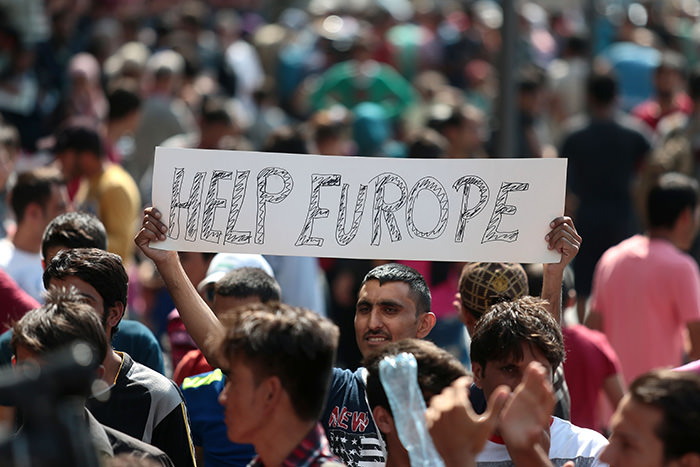 Man holds a placard reading ,Help Europe, as Syrian and Afghan refugees attend a protest to demand to travel to Germany on September 2, 2015 in Budapest (AFP Photo)
by Compiled from Wire Services Sep 02, 2015 12:00 am
While the refugee crisis is still escalating in Europe and traumatic scenes appear almost every day, Icelanders have started a new campaign to take in more Syrian refugees. Four percent of Iceland's population has joined a Facebook page seeking to have the country take in more people escaping the Syrian conflict, prompting the government to consider it.

An Icelandic author and professor, Bryndis Bjorgvinsdottir, on Sunday urged fellow citizens to speak out on Facebook if they wanted Iceland to take in more Syrian refugees. Around 12,000 people from a population of little over 300,000 joined the Facebook page. The government had earlier announced plans to take in 50 refugees from the Syrian conflict. That small number - over 4 million people have fled Syria since a civil war erupted there in 2011 - prompted Icelanders to sign up to the page that aimed to show the government there was public will to do more.

"I'm a single mother with a six-year-old son... We can take a child in need. I'm a teacher and would teach the child to speak, read and write Icelandic and adjust to Icelandic society. We have clothes, a bed, toys and everything a child needs. I would of course pay for the airplane ticket," wrote Hekla Stefansdottir in a post. Many offered housing, food, clothes and help integrating into Icelandic society. "I think people have had enough of seeing news stories from the Mediterranean and refugee camps of dying people and they want something done now," Bjorgvinsdottir told Icelandic public television RUV.

Prime Minister Sigmund David Gunnlaugsson now says a special council comprised of several ministers will map Iceland's resources to see how many refugees could be taken and said the government now had no fixed number. "After we got rid of the army from Iceland there is lots of empty housing in the old army base. It is evident that it is immoral to have it standing empty while people are dying," Oli Gneisti Soleyjarson, wrote in a comment. Iceland has no standing army.

The island nation, isolated in the North Atlantic with Greenland as its closest neighbour, has taken in 39 refugees in the past five years, 13 of them from Syria. Since 1956, the number of refugees totals just 511 people. But the Facebook page mentions an incident in 1973 when mainland Iceland absorbed 4,000 people from the tiny Westman Islands close by after a sudden eruption from Eldfell volcano. It says this was proof Iceland could do more.
Last Update: Sep 02, 2015 3:54 pm
RELATED TOPICS