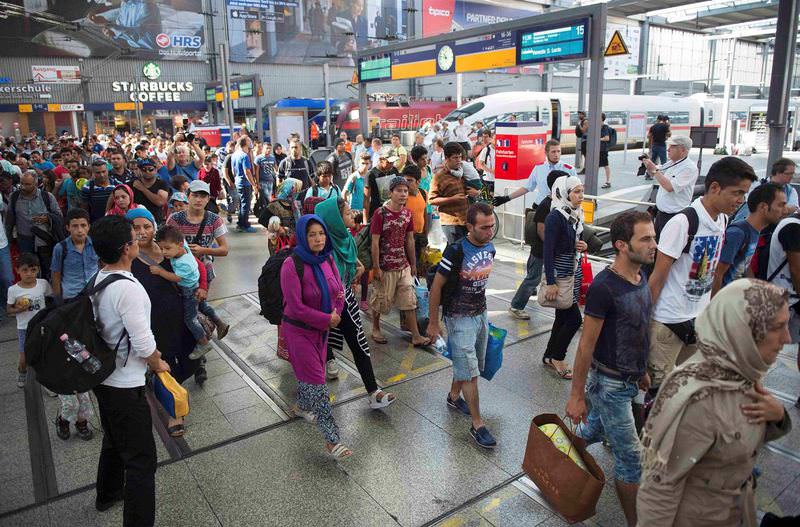 Migrants arrive at the main railway station in Munich. The German government expects 300,000 more refugees to come.
by Daily Sabah with Wires Sep 02, 2015 12:00 am

Thousands of migrants, most fleeing the civil war in Syria, arrived in Austria and Germany by train and foot. The high number of refugees may open the Schengen visa system to discussion as there is middle border control between EU countries

Trainloads of migrants arrived in Austria and Germany from Hungary on Monday as European Union asylum rules collapsed under the strain of a wave of migration unprecedented in the EU. As thousands of men, women and children, many fleeing Syria's civil war, continued to arrive from the east, authorities let thousands of undocumented people travel on to Germany, the favored destination for many. After the flock of people, Hungary, which is considered the gateway to more prosperous EU countries, has prevented migrants from using trains. The influx is a crisis for the European Union, which has eliminated border controls between 26 Schengen area states but requires asylum seekers to apply in the first EU country they reach - something that is often ignored as migrants race from the fringes of the bloc to its more prosperous heart. In line with EU rules, an Austrian police spokesman said only those who had not already requested asylum in Hungary would be allowed through, but the sheer pressure of numbers prevailed and trains were allowed to move on. The current situation may lead to a crisis among EU countries although the members said that the visa-free system and regulations for asylum seekers are still valid.

Thousands arrived in different destinations in Austria and Germany. "Thank God nobody asked for a passport ... No police, no problem," said Khalil, 33, an English teacher from Kobani in Syria. His wife held their sick baby daughter, coughing and crying in her arms, at the Vienna station where police stood by as hundreds of migrants raced to board trains for Germany. Khalil said he had bought train tickets in Budapest for Hamburg, northern Germany, where he felt sure of a better welcome after traipsing across the Balkans and Hungary. "Syrians call (Chancellor Angela) Merkel 'Mama Merkel'," he said, referring to the German leader's relatively compassionate response so far to the migrant crisis.

Late on Monday, a train from Vienna to Hamburg on which migrants were travelling was met in Passau, Germany, by police wearing bullet-proof vests, according to a Reuters witness. Police entered the train and migrants were asked to accompany them to be registered. About 40 people were seen on the platform. Police said they would be taken to a police station for registration.

Merkel, whose country expects some 800,000 migrants this year, said the crisis could destroy the Schengen open borders accord if other EU countries did not take a greater share. "If we don't succeed in fairly distributing refugees then of course the Schengen question will be on the agenda for many," she told a news conference in Berlin. "We stand before a huge national challenge. That will be a central challenge not only for days or months but for a long period of time." But it is far from certain her view will prevail when EU ministers hold a crisis meeting on Sept. 14. Britain, which is outside the Schengen zone, says the border-free system is part of the problem, and a bloc of central European countries plans to oppose any binding quotas. Refugees who managed to board the trains heading west on Monday mixed with well-heeled business travelers and tourists, some of whom were angry over the delays to their journey. "I have a plane to catch from Vienna Airport. I took the train because of the road checks and the traffic jam ... and now this? Are you kidding me?" said Orsolya Jakab, 35, a Hungarian accountant. Outside Vienna station, thousands of supporters of the migrants chanted: "Refugees are welcome here". "These people need help, they have come from a horrendous situation, we should not think twice about helping them," said Ottwin Schober, a retiree from Vienna who had been moved by the discovery of a truckload of 71 dead migrants in Austria last week.

Hungary suspended all rail traffic Tuesday from its main terminal in Budapest and cleared the train station of hundreds of migrants trying to board trains for Austria and Germany the hoped-for end destinations in their flight from turmoil in the Mideast and Asia. Migrants chanting "Freedom! Freedom!" congregated outside the station after being pushed out of the building, joining hundreds more in what has become a transit zone and place of refuge for those fleeing Syria's war and other hotspots. Police acted shortly after authorities announced over station loudspeakers that all trains would be stopped from leaving for an indefinite period of time. Hundreds of passengers with travel documents and tickets remained in the cavernous station, some staring at information boards still showing arrival and departure times. Scuffles broke out earlier Tuesday morning as some of the hundreds of migrants pushed toward metal gates at the platform where a train was to leave for Vienna and Munich, and were blocked by police. Several said they spent hundreds of euros (dollars) for tickets after police told them they would be allowed free passage.

French and German leaders reminded other European countries Monday of their shared responsibility toward refugees, as one official blamed harsh government policy for the deaths of dozens of migrants crammed into a truck. "Europe as a whole must move and its states must share the responsibility for refugees seeking asylum," Merkel said. "Universal civil rights so far have been closely linked with Europe and its history it was one of the founding motives of the European Union," she said. "If Europe fails on the question of refugees, this close connection with universal civil rights ... will be destroyed and it won't be the Europe we want." French Prime Minister Manuel Valls, announcing plans for a refugee center on the English Channel port of Calais, where thousands of migrants have been gathering trying to make their way to Britain, said firmness must be tempered with humanity. "The responsibility of us all is to make sure the right to asylum ... is respected everywhere. One cannot avoid it with barbed wire," Valls said in Calais, where an estimated 3,000 migrants live in a squalid, makeshift camp. Spanish Prime Minister Mariano Rajoy also urged the European Commission on Tuesday to come up with proposals to help Europe cope with its refugee and migrant crisis, including defining countries of safe origin.

The turmoil in the Middle East and the five-year war in Syria have led many people to flee the conflict in an attempt to seek security and shelter in a more prosperous and peaceful country, such as in Europe. The United Nations estimates 300,000 people have fled conflict and hardship in the Middle East and Africa for a better life in Europe this year. Some 2,500 have died in the attempt, mostly in the Mediterranean. The immigrants, without the funds or paperwork necessary, are forced to try their chances at sea routes, with many European countries turning a blind eye on thousands of deaths on these ways.

The U.N. refugee agency also said it expected the number of refugees moving through Macedonia to double to 3,000 a day, many of them children. It warned that the situation was also worsening in Greece and Italy, where the number of people arriving after crossing the Mediterranean this year is approaching 300,000. The western Balkans has now become one of the main routes into the EU.

The International Organization for Migration (IOM) estimates a third of a million people have crossed the Mediterranean so far this year, leaving from Libya, Turkey and other countries to land in Europe. The number of migrants to have arrived Europe so far this year (200,000) is so minor that it constitutes just 0.027 percent of Europe's total population of 740 million. So the argument that the world's richest continent cannot easily handle such a comparatively small influx compared to its population seems quite preposterous.

"In the first six months of this year, more than 2,350 would be migrants have died off the North African country's coast while trying to reach the shores of Europe. According to IOM, the number stood at 2,081 for the same period last year. Yet despite these grim statistics, over 255,000 migrants and refugees have successfully made the voyage to Europe by sea so far this year, the IOM says. Of these, nearly 100,000 came from war-torn Syria, more than 25,000 from Eritrea, and some 32,000 from violence-wrecked Afghanistan, according to IOM figures," Anadolu Agency reported.

The number of refugees reaching the EU's borders reached nearly 340,000 during the first seven months of the year, up from 123,500 during the same period in 2014, according to the European Union's border control agency Frontex. The Frontex said that it had detected some 107,500 people arriving outside regular channels in July, a sharp increase on the previous record set in June of over 70,000, and more than three times as many as it registered in the same month last year. Frontex officials were not immediately available to comment on how far the increase in numbers being detected may be a result of increased monitoring of the frontiers. Other EU data shows 625,920 people claimed asylum in the bloc last year.

Germany attracted 43 percent of Europe's 400,000 asylum applications in the first half of the year, more than double the number in the same period of 2014. Merkel called on EU member states to shoulder a greater share of responsibility for refugees. Germany is expecting to receive 800,000 asylum applications by the end of the year, four times the number of last year. The U.K. has been always considered as the altar of immigrant, but contrary to this perception, in 2014, only 25,870 people sought asylum in the U.K., the world's fifth-largest economy (and second-largest in Europe after Germany), and just 10,050 of the asylum seekers were accepted. Germany, on the other hand, accepted 97,275 refugees in 2014. Also France plans to build a camp next winter for as many as 1,500 migrants in the northern port city of Calais where twice that many are living in tents and hoping to make the sea-crossing to Britain.

European Union home affairs ministers will hold emergency talks on September 14 in Brussels on the escalating refugee crisis, the Luxembourg government said on Sunday. The call for a meeting of the EU's 28 member states follows a joint call for the talks by Germany, France and Britain earlier in the day. Germany's Thomas de Maiziere, Britain's Theresa May and France's Bernard Cazeneuve held talks Saturday on the issue, on the sidelines of a meeting in Paris on transport security.

Turkey has sheltered more than 1.7 million Syrians and is caring for an estimated 200,000 other refugees from countries such as Iraq, Iran and Afghanistan, according to the UN. According to recent U.N. figures, Turkey hosts nearly two million Syrian refugees who have fled the civil war in Syria which has been continuing for over four years in 25 camps built by the Prime Ministry of Disaster and Emergency Management Authority (AFAD). The camps have received several awards and been praised by international visitors for their efforts in providing sustainable services. The largest camp is in the border town of Suruç, located in the southeastern province of Şanlıurfa, which opened in February 2015 and hosts nearly 25,000 refugees.
RELATED TOPICS