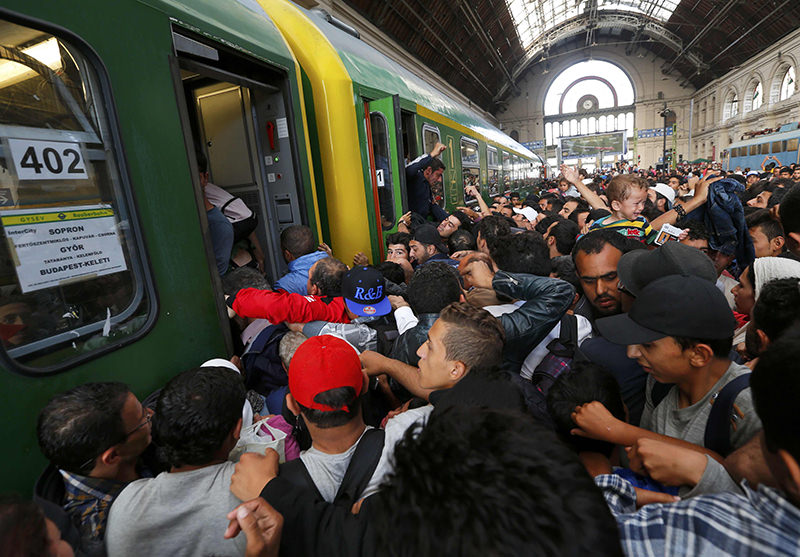 Migrants storm into a train at the Keleti train station in Budapest, September 3, 2015 as Hungarian police withdrew from the gates after two days of blocking their entry (Reuters Photo)
by Sep 03, 2015 12:00 am
Hungarian police allowed hundreds of refugees to pour into Budapest's main railway station on Thursday but authorities cancelled all trains to western Europe, triggering chaos and confusion.

Hundreds of people, many of them refugees from conflicts in the Middle East, stormed a waiting train, cramming children through open windows in the belief a two-day standoff with police had ended and they were being allowed to continue their journey west to Austria, Germany and beyond.

But signs in Hungarian said there were no west-bound trains. It was unclear why the police had suddenly withdrawn, having prevented over 2,000 migrants from entering for two days.

"There's a German flag on this train so we though it went to Germany. So it's not going to Germany?" a man clinging with one hand to the doors of a train told a Reuters journalist, declining to be named.

The standoff had become the latest symbol of Europe's migration crisis, the continent's worst since the Yugoslav wars of the 1990s.

Hundreds of thousands of refugees fleeing wars, as well as economic migrants escaping poverty, have been arriving in Europe by rickety boat across the Mediterranean or over land across the Balkan peninsula, straining the bloc's asylum system to breaking point and confounding efforts to forge a united policy.

The police withdrawal coincided with the start of a special parliamentary session in Hungary to debate tightening migration laws, setting up "transit zones" on the border with Serbia and introducing tougher punishment for those who cross illegally.

Hungary is completing a 3.5 metre-high fence on its southern border with Serbia to keep out migrants, 140,000 of whom have been caught entering the country so far this year.

The government said the new measures to be adopted by parliament this week would be enacted by Sept 15 and cut illegal border crossings to zero.

In an opinion piece for Germany's Frankfurt Allgemeine Zeitung, Hungarian Prime Minister Viktor Orban said his country was being "overrun" with refugees, most of which, he noted, were Muslims, not Christians.

"That is an important question, because Europe and European culture have Christian roots. Or is it not already and in itself alarming that Europe's Christian culture is barely in a position to uphold Europe's own Christian values?" he asked.

"Only when we have protected our borders can questions be asked about the numbers of people we can take in, or whether there should be quotas."

Nearly all those who have entered Hungary press on west to the richer countries of northern and western Europe, ignoring EU rules which require them to wait for processing in the EU country where they first arrive.

Germany expects to receive 800,000 this year and has begun accepting asylum claims from Syrian refugees regardless of where they entered the bloc, even though undocumented migrants are theoretically barred from travel across the EU.

That has caused confusion for its neighbours, which have alternated this week between letting them through and blocking them. Hungary allowed thousands to board trains for Germany on Monday but then called a halt to the travel, leaving migrants camped in the summer heat in central Budapest.

Seventeen-year-old Ysra Mardini, from the Syrian capital Damascus, was among those waiting at the train station.

"We want to go to Germany but that train in the station, maybe it goes nowhere. We heard it may go to a camp. So we will stay out here and wait," she said.