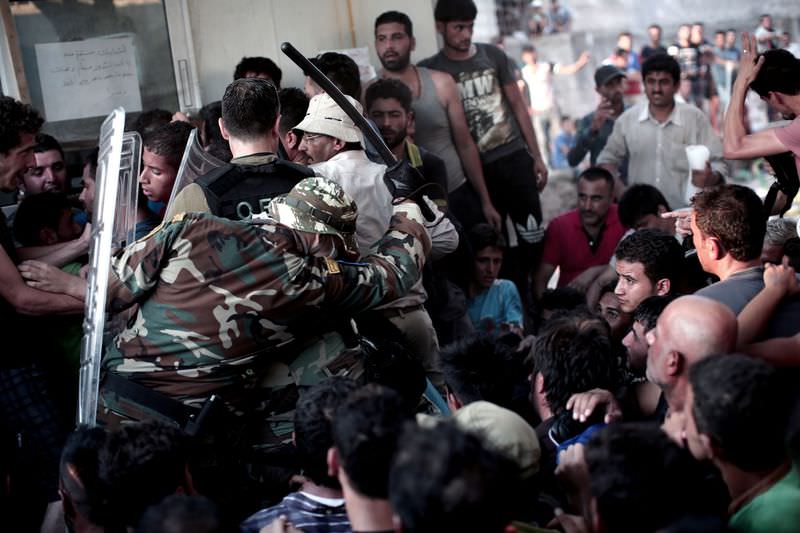 by Anadolu Agency Sep 04, 2015 12:00 am
Authorities in Greece have used stun grenades on refugees in Mytilene port, while in Kos island, reports of attacks on asylum seekers by a group calling them to "go home" have emerged, local media and a human rights organization said Friday.

Around 1,000 Afghans had allegedly tried to occupy Blue Star 1 ferry at the port, shouting "Athens- Athens". After the use of force on the refugees, the ferry eventually managed to sail away from the port, Greek media said.

Greek authorities later led some 10,000 refugees from Mytilene port to an open space nearby.

Mytilene is one of the many Greek islands where thousands of refugees have arrived, most of whom take a perilous journey over high seas in hopes of eventually reaching Western Europe.

Thousands of refugees have also camped at several central points in downtown Athens.

A 15-year-old Syrian refugee girl Alisa told Anadolu Agency that she only wanted to lead a normal life, filled with hope and promise. "My dream is to become an actress but it seems that my dream won't come true anymore since I have lost my home and we have nowhere to go now," she said.

"Our aim is to reach Germany or any other north European country; we don't want to stay here," Alisa's mother Galia said.

She said that their journey to Greece had been filled with many dangers. "The conditions are harsh" she said, adding: "We traveled for days with just a bottle of water".

Refugees on the Greek island of Kos were reportedly physically attacked by a group of 15 to 25 people on Thursday night, Amnesty International said in a statement Friday.

"Last night Amnesty staff witnessed a group of 15-25 people, brandishing bats physically attack refugees on Kos, while shouting ?go back to your countries' and other slurs," the human rights group said.

"Last night's violent attack once again throws into sharp relief the danger to them [refugees] and activists who help them. Action must be taken now at all levels to ensure they are protected," Kondylia Gogou, Greece Researcher at Amnesty International, said in the statement.

On the other hand, European Commissioner for Migration, Home Affairs and Citizenship Dimitris Avramopoulos praised Greek authorities for their handling of refugees arriving on the island of Kos, despite international criticism of "hellish" treatment to asylum seekers.

Speaking to reporters in Kos on Friday at a joint press conference with European Commission Vice-President Frans Timmermans, Avramopoulos said: "It is our obligation to receive them with respect and dignity. We know how to be hospitable, we the Greeks."

Avramopoulos said that many refugees had been saved from drowning with help from the Greek coastguard and police.

"Kos may be facing problems but we see the humane way the local inhabitants [are] showing solidarity to refugees arriving [on the island]," he said.

An estimated 3,000 to 4,000 refugees were staying on Kos and the majority were believed to be from Syria, Afghanistan and Iraq.

Amnesty reported its researchers found children, as young as a week old, among the crowds and forced to wait for days in the heat to be registered by the local authorities.

"The hellish conditions the refugees are now forced to endure and the official indifference to their plight is appalling," Amnesty's Gogou added.

More than 31,000 refugees have arrived in Kos so far this year, according to Greek coastguard staff.

Around 2,500 refugees and migrants have died or gone missing trying to reach Europe this year alone, according to the United Nations.

Interior ministers of all 28 EU states are expected to meet on Sept. 14 in Brussels to discuss ways to cope with the migrant crisis.
Last Update: Sep 04, 2015 6:42 pm
RELATED TOPICS