Thousands of refugees not welcomed by Hungary arrive in Germany 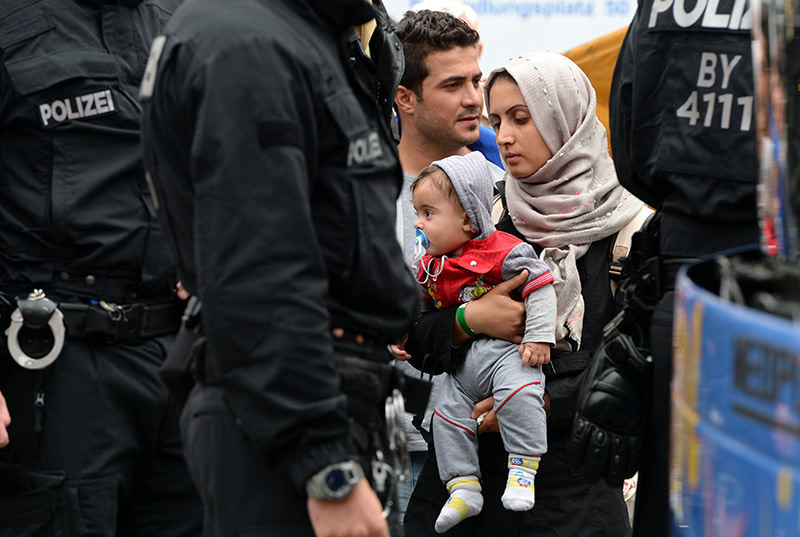 Refugee woman with child waits for a bus after their arrival at the main train station in Munich, southern Germany, on September 05, 2015 (AFP Photo)
by Compiled from Wire Services Sep 06, 2015 12:00 am
German police said they expected a record 10,000 refugees to arrive through the southern state of Bavaria on Sunday.

About 6,000 had already arrived, mostly on trains and buses taking migrants from Hungary via Austria, and 4,000 more were expected, federal police reportedly said.

Thousands of migrants and refugees have arrived by train and bus in cities across Germany overnight. The total for Saturday was revised down to 7,000 arrivals.

Police say a special train with 570 people on board arrived in the Thuringian town of Saalfeld late Saturday. More than half of them were taken onward to Dresden, where a school for German army officers has been cleared to provide temporary shelter for 350 newcomers.

Trains also took migrants to Hamburg in the north and Dortmund in the west of the country, while buses brought more than 300 people to the capital Berlin.

The refugees were allowed to leave Hungary Saturday after the country opened its borders with Austria.

"I'm very glad to be in Germany. I hope that I find here a much better life. I want to work," said Homam Shehade, a 37-year-old Syrian shopkeeper who spent 25 days on the road. He left behind his parents, a brother, wife, a 7-year-old boy and a 2-year-old girl. He hopes to bring them all to Germany. Until then, he said: "I hope that God protects them from the planes and bombs. My shop was bombed and my house was bombed."

As the migrants departed Hungary, leaders took a few final swipes at their departing guests.

Prime Minister Viktor Orban told reporters that Hungary drove the migrants to the border only because they were posing a public menace, particularly by snarling traffic and rail lines west of Budapest when they mounted a series of surprise breakouts from police-controlled positions Friday and headed for Austria on foot.

Orban said the people being taken by Germany mostly come "from regions that are not ravaged by war. They just want to live the kind of life that we have. And I understand that, but this is impossible. If we let everybody in, it's going to destroy Europe."

Orban said Hungary was determined to staunch the flow of foreigners traversing the country. He criticized European Union plans to reach a bloc-wide agreement at a summit Sept. 14 committing each nation to accept higher quotas of foreigners to shelter, arguing that this would only spur more one-way traffic.

A central Budapest rally by Hungary's second-largest party, Jobbik, underscored why many of those seeking sanctuary in Europe wanted to get through the country as quickly as possible. Earlier in the week, many of the same Jobbik activists traveled south to the border with Serbia to hurl verbal abuse at newly arrived travelers.

Jobbik leader Gabor Vona told the crowd of 300 waving Hungarian and party flags "that Hungary belongs to the Hungarians. We like everybody, we respect everybody but we don't want anybody coming here."

Other speakers branded supporters of refugee rights "traitors" and "scum."

For days the Hungarian government had refused the migrants train travel out of the country, citing EU rules that require asylum seekers to register and take refuge in the first EU state they arrive in.

Meanwhile, Greece sent troops and police reinforcements Sunday to Lesbos after renewed clashes between police and migrants, the public broadcaster said, while Syrian refugees on the island were targeted with Molotov cocktail attacks.

Authorities are working to "relieve the island as quickly as possible of a large number of refugees, so that the flow can be brought back to a tolerable level," deputy migration minister Ioannis Mouzalas said as he visited the island.

Lesbos is one of several Greek islands struggling to cope with a huge influx of people arriving in flimsy boats from Turkey.

More than 230,000 people have landed on Greek shores this year and the numbers have soared in recent weeks as people seek to take advantage of the calm summer weather.

There have been repeated clashes on Lesbos between police and migrants -- and between migrants themselves -- over delays in the registration process that have left thousands of refugees stuck on the island, unable to continue their journey to other countries in Europe.

A police source said a pair of attackers on a motorbike threw two Molotov cocktails at refugees sleeping in parks in the island's main town, Mytilene.

A Syrian was lightly injured in one of the attacks, the source said. State news agency ANA said two 17-year-olds were arrested over the assaults Friday morning.

Riot-police used batons Sunday morning to beat back a crowd waiting to be registered, after scuffles broke out between Syrians -- who are granted priority in the process -- and Afghans forced to wait for much longer, public TV channel ERT 1 said.

Two extra riot squads arrived on the island on Sunday while 60 more ordinary police officers have been dispatched to speed up the registration process, ERT 1 said.

The army has also been mobilized to distribute food and set up refugee camps.
Rights groups have repeatedly criticized Greek police for heavy-handed treatment of refugees and migrants.

Lesbos and other islands in the Aegean Sea, such as Kos, continue to be inundated by arrivals at the rate of more than 2,000 a day, according to port police.

Kos, like Lesbos, has seen friction between the migrants and island residents, with rights group Amnesty International saying its staff witnessed "thugs" with bats attacking refugees this week, telling them to "go back to their countries."

The EU has offered financial assistance to help Greece cope with the influx, but demands that it sets up systems to sort refugees fleeing conflict and persecution from economic migrants, who will be sent back.
Last Update: Sep 09, 2015 10:52 am
RELATED TOPICS