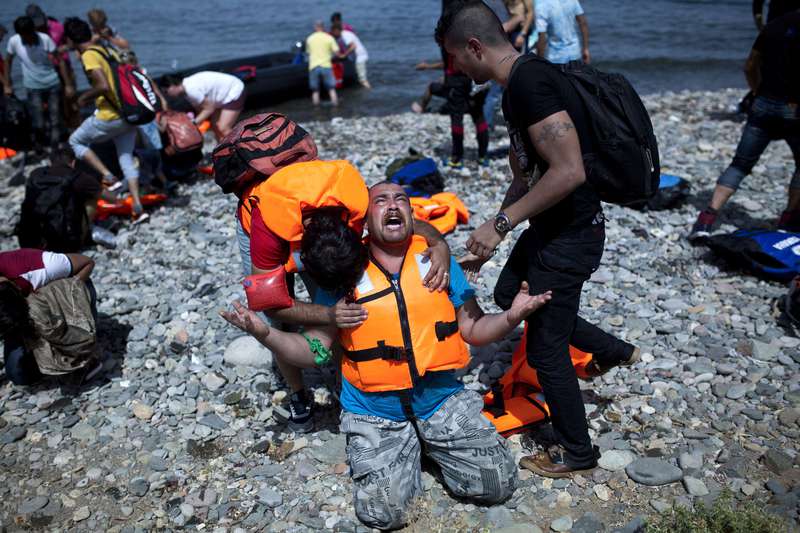 A Syrian refugee prays after arriving on the shores of the Greek island of Lesbos aboard an inflatable dinghy across the Aegean Sea from from Turkey on September 7, 2015. (AFP Photo)
by Sep 07, 2015 12:00 am
The Greek island of Lesbos is "on the verge of explosion" with violence erupting as local sources for more than 15,000 mainly Syrian refugees are rapidly shrinking, the immigration minister said Monday.

Yiannis Mouzalas told To Vima radio that boats taking refugees to the Greek mainland would soon be using a second port to ease pressure on the island of 85,000 inhabitants.

"Mytilene currently has 15,000-17,000 refugees and this is the official figure from all services," Mouzalas, a junior interior minister, told the station. "The situation is on the verge of explosion."

A second departure point would open at the fishing village of Sygri in coming days, he said.

Lesbos is one of several Greek islands struggling with an influx of thousands of refugees, many of them Syrian refugees, setting sail from the nearby Turkish coast.

At the island's port capital Mytilene, where most of the refugees gather hoping to catch a boat off the island, they sleep in the open without toilets or showers.

There are no food handouts or drinking water for these temporary visitors in the town itself and in the camps the conditions are little better.

With local authorities overwhelmed -- and unwilling, according to critics, to set up a reception system -- it is mostly volunteers and humanitarian organisations that have helped provide food and medical care to the refugees, who often arrive with their extended families.

"We hope that in the next five days the (islanders) and the refugees will see clear signs of improvement," Mouzalas said.

"We call on the people of Lesbos not to take part in the upcoming elections and we state our intention not to cast ballots unless immediate measures are taken to de-escalate the situation," Galinos said in a statement.

Clashes have broken out on Lesbos in recent days between police and refugees, and between refugees of different nationalities, over delays in the registration process that have held up their journey on to other countries in Europe.

On Sunday, police reinforcements were sent to the island after Syrian refugees were targeted with Molotov cocktails.

Two 17-year-old boys were arrested after throwing two Molotov cocktails at refugees sleeping in a park, injuring a Syrian man in the process.

Syrians have been granted priority in the registration process, sparking tensions with other refugees from Afghanistan, Pakistan and other war-torm impoverished nations forced into long waits on the island.

More than 230,000 people have landed on Greek shores this year, with the numbers soaring in recent weeks as people seek to take advantage of the calm summer weather.

The Greek state has chartered a ferry, the Eleftherios Venizelos, to transport refugees from the islands to the mainland.

"There is a big problem there (Lesbos), there are many Syrians there, maybe eight thousand people. The government cannot give them their papers to come here," Nader, a 42-year-old salesman from northern Syria, told AFP after arriving at the port of Piraeus.

Mouzalas said another ship would be chartered for this purpose, but hundreds more arrive on a daily basis from the neighbouring Turkish coast.