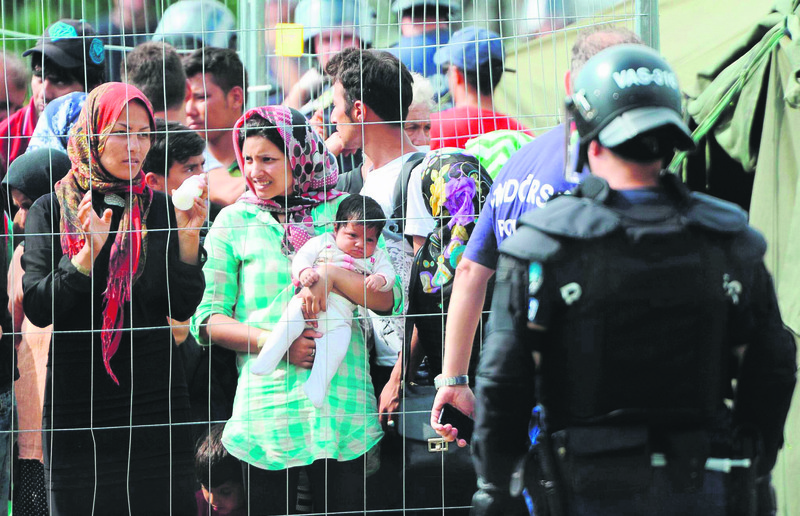 Hundreds of migrants wait behind a fence in Hungary with no access to water, food or other basic needs.
by Sep 07, 2015 12:00 am

Deep divisions over how to cope with a flood of migrants from the Middle East, Africa and Asia pose a threat to the European Union's values and global standing and may diminish its ability to act jointly to reform the euro zone and ease Greece's debt. With harrowing images of drowning children, refugees being herded on and off trains and beaten by police, and barbed-wire fences slicing across Europe, the migration crisis is the moral equivalent of the euro zone crisis. In both cases, the principle of solidarity is being sorely tested. By making the EU look ineffective, disunited and heartless, pitting member states against each other and fuelling political populism and anti-Muslim sentiment, the latest crisis is undermining the ideals of European integration.

However, it often takes a bout of disarray and recrimination before the EU finds a joint response to a new challenge. Policy may be shifting in reaction to unbearable pictures of suffering, and to fears that the Schengen zone of open-border travel among 26 continental European countries may otherwise fall apart. "The world is watching us," German Chancellor Angela Merkel said last week as she tried to persuade European peers to share the burden of taking in people fleeing war and misery in Syria, Iraq, Afghanistan, Libya and beyond. "If Europe fails on the refugee question, its tight bond with universal human rights will be destroyed, and it will no longer be the Europe we dreamed of," she said. Merkel's bold attempt to exercise leadership, in contrast to her deep caution in the euro crisis, has won only cautious support from close allies like France, where domestic opposition to more immigration is strong, and been rejected outright by countries such as Hungary and Britain.

For many European politicians trying to keep in tune with voters, preventing unwanted immigration is a greater priority than welcoming hundreds of thousands of haggard, uprooted foreigners, especially if they are Muslims.

For the first time in a decade since 10 central European countries joined the EU, the crisis has opened up an east-west divide, with most new member states refusing to accept quotas of refugees, some explicitly citing religious grounds. That prompted Austrian Chancellor Werner Faymann to say that, if the eastern states did not share the burden, the EU should reconsider its future financial aid for their development.

Hungary, the Czech Republic and Slovakia, from which refugees fled to western Europe to escape Communist crackdowns in 1956 and 1968, are among those most vehemently opposed to any mandatory distribution of asylum seekers now.

Hungarian Prime Minister Viktor Orban has said the migrants pose a threat to Europe's "Christian roots", while both Slovakia and the Czech Republic have said they would take in only a handful of preferably Christian refugees. Orban has accused Merkel of exacerbating the crisis by announcing Germany's willingness to admit large numbers of Syrians, encouraging more migrants to risk their lives in a scramble for Europe that has overwhelmed Hungarian authorities. "Since the beginning of the euro crisis, Europe became part of the moral problem, not part of the solution," said Antonio Vitorino, president of the Jacques Delors Institute, a pro-EU think-tank. "This migration crisis adds a little bit more to the loss of the exemplary role of European integration."

The socialist Portuguese former EU justice and home affairs commissioner, who helped frame the flawed asylum rules that have crumbled under the weight of this year's influx, said Europe's profile as "a land of human dignity and respect for international commitments" was at stake. In areas of the world such as southeast Asia and Latin America that once looked to the EU as a model of regional integration, people were now saying: "You used to teach us how to solve our problems, and now you're unable to solve your own problems." Vitorino acknowledged that the Dublin convention he helped draft, which stipulates that the country where a refugee first enters the EU is responsible for handling the asylum claim, was unfair to states on Europe's fringes, which received little financial or practical help. "Practice shows that the system did not work," he said. "Now things have got out of control." Europe needed a common asylum policy capable of filtering applicants, sending home those who were not entitled to asylum and relocating genuine refugees according to member states' capacity to receive them.

As EU leaders struggle to come up with a joint approach, their discord also bodes ill for attempts to find collective solutions to economic and environmental challenges such as reforming the euro zone or fighting climate change. "The EU has trouble handling more than one problem at a time," said Tina Fordham, chief global political analyst at U.S. banking giant Citi, who considers the migration crisis a major source of political risk for Europe. "Discord and backtracking over refugees and migration could end up fragmenting EU cohesion, taking away the political oxygen to deal with other challenges in the economy or Ukraine," she told Reuters in an interview. Governments could fall over the issue and upcoming elections could be swayed. Already, the rise of anti-immigration populist parties was putting the Nordic social model at risk. Fordham also saw a possible impact on Britain's negotiations to change its relationship with the EU before it holds a referendum on continued membership by the end of 2017. "The UK's perceived failure to participate in burden-sharing could further undermine David Cameron's ability to extract concessions ahead of the referendum," she said.

Cameron has refused to join any European scheme to relocate refugees, and insisted the answer was not to take in more people until he bowed to media pressure after an outpouring of emotion over pictures of a drowned Syrian toddler on a Turkish beach. Peter Kellner, president of the opinion pollster YouGov, said the refugee crisis and British public anxiety about uncontrolled immigration from EU countries made a vote for "Brexit" more likely, though still not the most probable outcome. "In the public mind they feed a single narrative: that Britain is being swamped by new arrivals and the EU carries much of the blame," Kellner wrote in a comment for Prospect magazine.