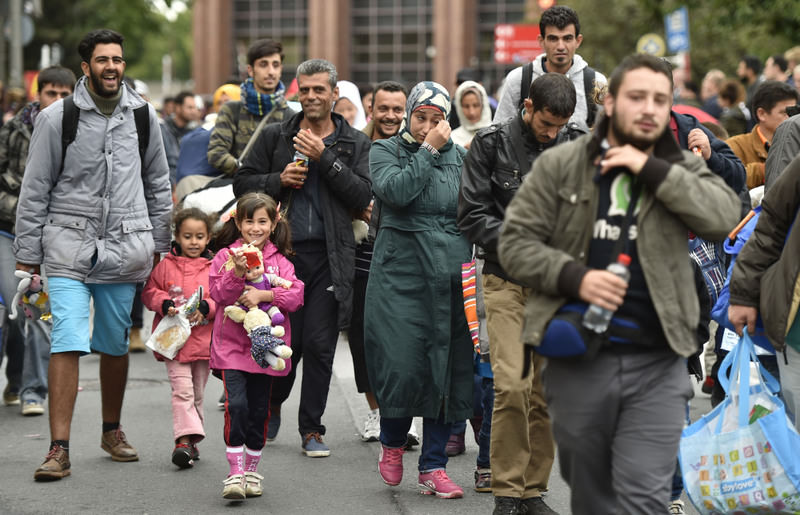 Migrants walk from the main station in Dortmund, Germany, to a hall where they get first attendance.
by Daily Sabah with Agencies Sep 08, 2015 12:00 am

Migrants in Hungary have started to head west as Germany increases pressure on its neighbors to help it deal with Europe's refugee crisis. Meanwhile, some countries insist on only taking Christian refugees

Calm returned on Sunday to the main border point between Austria and Hungary after more than 14,000 people used it over the weekend to enter Austria, but cross-border tensions continued with Hungary's Prime Minister Victor Orban hitting back at his EU counterparts who blamed his country for the chaos. Austrian police spokesman Helmut Marban said that no migrants had arrived at the Nickelsdorf border point since before midnight, when 260 people crossed into Austria and left shortly afterward by train to Vienna. Beyond the Red Cross tent and the aid parcels near the crossing, there was little of the chaos over the weekend.

Austria's government, which had opened its borders to the thousands pushing westwards, adopted a wait-and-see attitude. Chancellor Werner Faymann on Sunday announced that emergency measures to deal with asylum-seekers would be phased out "step by step," but no timetable was announced.

Faymann and other EU leaders have criticized Hungarian Prime Minister Viktor Orban, blaming him for the chaos they say left Austria and Germany no choice but to essentially open their borders for thousands of migrants and refugees who complained of neglect and human rights violations in Hungary. Pushing back Monday, Orban mocked the European Union's efforts to distribute migrants through a quota system and cast Hungary as the EU's "black sheep" standing up against the EU leadership. Any EU migrant quota among the bloc's 28 countries, makes no sense in a system where the free movement of people would make it impossible to enforce, he said. Most of those crossing into Austria over the weekend proceeded by train to Germany. Austrian officials said only about 90 people asked for asylum in Austria.

Germany, backed by Sweden, raised the pressure yesterday on neighbors to help it cope with Europe's refugee crisis. In a late-night meeting lasting until early Monday in Berlin, the German government agreed to spend 6 billion euros next year to support the hundreds of thousands of new arrivals. German officials recently predicted that up to 800,000 migrants will arrive by the end of the year, many of them refugees fleeing war and persecution in Syria, Iraq and Eritrea. The government's aid package will include improved housing, more federal police and language classes. Five asylum seekers were injured in a fire early Monday in Rottenburg in southwest Germany, the German news agency dpa reported. Three of them were injured when they jumped out of the burning building, while two others had to be treated for smoke inhalation. The cause of the fire was not immediately clear.

On Sunday, thousands of exhausted migrants received a hero's welcome as they streamed into Germany as the U.N. criticized the huge disparity in European efforts to help them. As well-wishers turned out en masse at train stations in Munich, Frankfurt and other German cities, the U.N.'s refugee chief said the crisis could be "manageable" if European countries all pulled their weight and agreed on a common approach. "It is a manageable crisis if everyone agrees on a joint action plan," Antonio Guterres told French radio station RFI. "It is a very serious problem... but on the scale of the planet it is not one of the biggest crises," said the former Portuguese prime minister. Guterres said the number of people displaced by conflicts had soared from 11,000 a day in 2010 to 42,5000 a day in 2014.

Meanwhile, Pope Francis urged a different approach in his Sunday sermon. He described the refugees' plight as an issue for Christians everywhere, urging "every parish, every religious community, every monastery, every sanctuary in Europe" to take in a family. "Faced with the tragedy of tens of thousands of asylum-seekers fleeing death (as) victims of war and hunger who are hoping to start a new life, the gospel calls on us to be the neighbor of the smallest and the most abandoned, to give them concrete hope," he said. The Vatican's two parishes would take in two refugee families "in the coming days," he said, setting an example for more than 50,000 other parishes across the continent.

Images of the body of a three-year-old Syrian refugee named Aylan on a beach in a Turkish holiday resort set off a fresh wave of soul-searching in Europe last week. It highlighted the peril faced by thousands fleeing war and bloodshed in the Middle East and beyond. Most of the migrants are hoping to reach Germany, Europe's biggest economy, which is expecting a record 800,000 new asylum seekers this year, four times the number in 2014.

The turmoil in the Middle East and the five-year war in Syria have led many people to flee the conflict in an attempt to seek security and shelter in a more prosperous and peaceful country, such as in Europe. The United Nations refugee agency, UNHCR, said Saturday that 366,402 migrants have crossed the Mediterranean to Europe this year, with 2,800 killed or missing en route.

Compared to Syria's neighboring countries, the U.N. refugee agency encouraged European countries to do more to share the burden of the international community in the migrant crisis. Even though the number of Syrians who have fled the war in their country has been increasing, the percentage of refugees heading to Europe remains small with only around 4 percent of Syrians having sought asylum in European countries. Syria's neighboring countries – Turkey, Lebanon, Jordan and Iraq – have over 3 million Syrian refugees, with Turkey only sheltering more than 1.7 million Syrians and caring for an estimated 200,000 other refugees from countries such as Iraq, Iran and Afghanistan, according to the U.N.
RELATED TOPICS