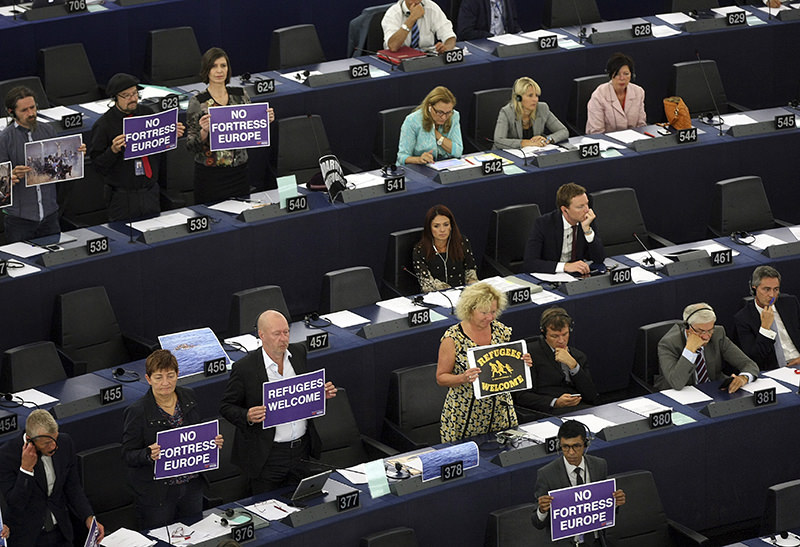 Parliament members holds posters while European Commission President Jean-Claude Juncker delivers his State of the Union address at the European Parliament in Strasbourg, eastern France (AP Photo)
by Associated Press Sep 09, 2015 12:00 am
The head of the European Commission issued an impassioned plea Wednesday for Europe to face up to its immigration crisis, urging EU countries to agree by next week to share 160,000 refugees and warning that Greece, Italy and Hungary can no longer handle the influx alone.

"The refugee crisis will not simply go away," Juncker told EU lawmakers, noting that some 500,000 migrants have entered Europe this year, many from conflict-torn Syria and Libya. "It's high time to act."

"We are fighting against ISIS. Why are we not ready to accept those who are fleeing ISIS?" he said.

Britain, Ireland and Denmark are not legally bound to take part, due to exemptions they have negotiated previously. Greece, Italy and Hungary are not included.

The Czech Republic and Slovakia immediately rejected the idea that compulsory quotas might be imposed, while other nations had already criticized the new proposal even before it was made public. Chances of success hang in the balance because a solid majority of the 28 EU states must support the move for it to take place.

More than 378,000 migrants have entered Europe this year, including over 256,000 crossing the sea to Greece and nearly 120,000 braving the Mediterranean to reach Italy, according to the International Organization for Migration.

Hungary estimates that more than 160,000 people have crossed its borders alone this year. The latest proposals were drawn up as Budapest was busy building an anti-migrant fence on its border with Serbia. Tens of thousands have entered just in the last few months, many cramming into buses and trains bound for Germany.

Despite the urgency, the EU's first refugee plan never won full support, and only around 32,000 refugees have been allocated. Hungary was among the countries to reject it, along with the Czech Republic, Slovakia and Poland.

Juncker wants both plans endorsed Monday at a meeting of EU interior ministers in Brussels. "This has to be done in a compulsory way," he said.

In Berlin, German Chancellor Angela Merkel backed the new immigration plan and also called for it to be made compulsory.

"We need a binding agreement on a binding distribution of refugees among all member states, according to fair criteria," Merkel said. Germany has taken in more migrants than any other EU country, and would have to accept more than 31,000 more under the scheme.

On Monday, France threw its weight behind the EU plan by saying that it would take in 24,000 refugees this year, exactly the figure proposed in the new scheme.

Britain, which is not taking part, announced separately that it would welcome up to 20,000 refugees currently in countries outside the EU over the next five years. Ireland is also taking 520 refugees from camps outside Europe.

But Czech Prime Minister Bohuslav Sobotka said Wednesday that his government's opposition to mandatory quotas for migrants has not softened.

"The compulsory quotas are not a good solution," Sobotka said in a statement. "To continue with a discussion about their establishment all across Europe only prevents us from taking really important and necessary steps."

The Czechs argue most of the migrants have been heading for Germany and don't want to stay in the Czech Republic anyway. Hungary has also made a similar argument.

This new response marks a shift to rapid humanitarian action as the EU begins to accept that longer-term policy moves are ill-adapted to the scale of the refugee emergency.

But it only accounts for a fraction of the people seeking better lives in Europe. The EU estimates that two in three migrants arriving are fleeing conflict and would probably qualify for international protection. Those coming in search of jobs alone are likely to be sent back home.

To help ease the burden on European migrant-screening facilities, Juncker also announced a list of "safe countries" including Albania and Kosovo, from which thousands of people have fled this year. The "safe country" tag is likely to mean that few asylum applications by nationals from those countries will succeed.

The full "safe" list is made up of candidates for EU membership or countries hoping to join. They are: Albania, Bosnia and Herzegovina, Kosovo, Macedonia, Montenegro, Serbia and Turkey.

Almost 50,000 people from Kosovo applied for asylum in the EU in the first three months of this year. More than 21,000 did so in Germany. More than 9,000 Albanians sought asylum in July, mostly in Germany, Sweden and France.

Longer-term, the Commission also unveiled a plan to set up a 1.8 billion-euro ($2 billion) fund to help African nations better manage their borders and help reduce the number of migrants heading for Europe. The money would focus on northern Africa and Horn of Africa countries like Eritrea, Ethiopia and Somalia.

Juncker appealed to all 28 member states to match the Commission's ambitions by providing funds of their own.
Last Update: Sep 09, 2015 5:38 pm
RELATED TOPICS