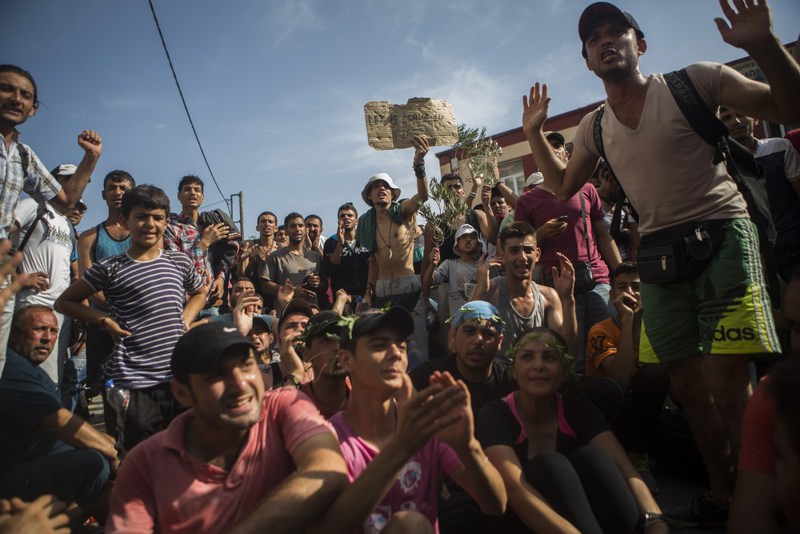 Refugees and migrants take part in a protest to demand faster processing by local authorities of their registration and the issuing of travel documents at the port of Mytilene on the northeastern Greek island of Lesbos.
by Daily Sabah with Agencies Sep 09, 2015 12:00 am

European Council President Donald Tusk warned the refugee crisis is just the start of a real ‘exodus,' calling on EU countries to be pragmatic as new clashes erupted between police and migrants on the Greek island of Lesbos

Fresh clashes erupted between police and migrants on the Greek island of Lesbos Tuesday, the latest flashpoint of the crisis shaking Europe as President of the European Council Donald Tusk warned the refugee "exodus" could last for years. With authorities warning Lesbos was "on the verge of explosion," a dozen or so coastguards and riot police armed with batons struggled overnight to control some 2,500 migrants in the island's main port, screaming "keep back" as the crowds surged toward a government-chartered ferry bound for Athens. The scenes of chaos underscored the difficulty authorities across Europe face as they struggle with a surge of people making a hazardous trek through the continent as they flee war and misery in their home countries and the continent's continued division over how to handle the influx.

With other Greek islands close to Turkey also overwhelmed, Tusk insisted "the wave of migration is not a one-time incident but the beginning of a real exodus, which only means that we will have to deal with this problem for many years to come." As the desperate plight of migrants touches hearts around the world, Britain, France and even South American countries have pledged to accept tens of thousands of refugees crossing the EU's frontiers almost every day.

Venezuela said it would accept 20,000 - the same number that Britain has promised to take over five years - while Brazilian President Dilma Rousseff declared migrants would be welcomed there with "open arms", and Chile's leader Michelle Bachelet said it "was working to take a large number." Canada's Quebec province also said it will take 3,650 this year. Germany, Europe's top economy, has said it can take some 500,000 refugees annually for a few years, with Chancellor Angela Merkel saying the influx would result in profound change in the country.

Hours after another 61 migrants were rescued off the island, junior Greek Interior Minister Yiannis Mouzalas told To Vima radio the port of "Mytilene currently has 15,000 - 17,000 refugees... The situation is on the verge of explosion."

In Hungary, scores of migrants broke through a police line near a refugee center and marched towards Budapest Monday before agreeing to turn back, while police in Denmark closed down a motorway in the south as crowds made for the Swedish border. Elsewhere on Europe's borders, the poor and desperate kept coming, both on the land corridor through the Balkans and on overcrowded boats across the Mediterranean.

Tusk said in a speech in Brussels that the "exodus" meant Europe had "to learn how to live with it without blaming each other." The EU has been riven by divisions on how to cope with the crisis, with countries like Germany urging more solidarity and mainly eastern nations such as Hungary taking a hardline approach.

European Commission chief Jean-Claude Juncker is expected Wednesday to unveil a proposal that would see Germany take more than 31,000 migrants, France 24,000, and Spain almost 15,000, a European source told AFP. French President François Hollande warned the core ideal of open borders within the EU was at stake. "If there is not a united policy, this mechanism will not work," he said, referring to the passport-free Schengen zone across much of the continent. Merkel, whose country is Europe's top refugee destination, hailed as "breathtaking" the warm welcome given to the more than 30,000 migrants who arrived there over the weekend. Germany pledged 8 billion euros more in funding to house them, on Monday.

The United Nations also said yesterday that Europe must offer guaranteed relocation for Syrian refugees, as record numbers flee to Macedonia and Greece due to misery in their homeland and surrounding countries. A record 7,000 Syrian refugees arrived in Macedonia on Monday, while some 30,000 are on Greek islands, including 20,000 on Lesbos, it said. "We expect the movement to continue," UNHCR spokeswoman Melissa Fleming told a Geneva news briefing. "Discussions in Europe this week are taking on even greater urgency because it obviously cannot be a German solution to a European problem." Fleming welcomed separate offers announced by Britain and France on Monday to take in Syrian refugees, but said reception centers must be set up in countries including Hungary and Greece to process asylum claims. "Those can only work if there is a guaranteed relocation system whereby European countries saying yes will take X number. We believe it should be 200,000 -- that's the number we believe need relocation in Europe countries," Fleming said. "350,000 have arrived in Europe that has a half a billion people; it is a manageable situation if the political will were there."

The turmoil in the Middle East and the five-year war in Syria have led many people to flee the conflict in an attempt to seek security and shelter in a more prosperous and peaceful country, such as in Europe. The United Nations refugee agency, UNHCR, said Saturday that 366,402 migrants have crossed the Mediterranean to Europe this year, with 2,800 killed or missing en route. Compared to Syria's neighboring countries, the U.N. refugee agency encouraged European countries to do more to share the burden of the international community in the migrant crisis. Turkey, Lebanon, Jordan and Iraq have over 3 million Syrian refugees, with Turkey only sheltering more than 1.7 million Syrians and caring for an estimated 200,000 other refugees from countries such as Iraq, Iran and Afghanistan, according to the U.N.
RELATED TOPICS