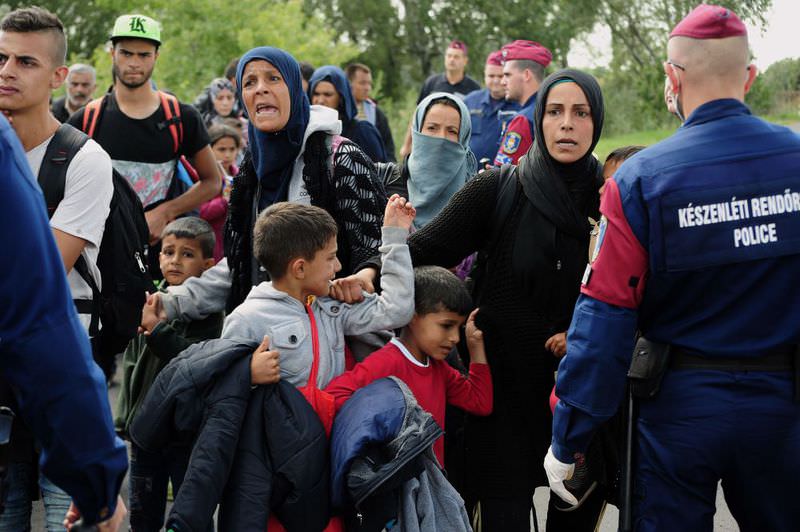 Police officers stop a group of migrants after a migrant crowd broke out of a collection point near Roszke on the Hungarian-Serbian border.
by Daily Sabah with Agencies Sep 10, 2015 12:00 am

EU Commission President Juncker unveiled plans for refugee quotas and urged member states to be unified and agree on a plan to take in 160,000 refugees. Juncker warned countries against making religious distinctions when deciding to admit refugees

European Commission chief Jean-Claude Juncker unveiled a "bold" new plan yesterday for dealing with the migrant crisis, calling on EU states to agree as early as next week to relocate 160,000 refugees from frontline countries.

In his first State of the Union speech, Juncker urged EU states to look to historic values as it copes with the biggest flood of refugees since World War II, most of them fleeing conflict in Syria. "The refugee crisis will not simply go away," Juncker told EU lawmakers, noting that some 500,000 migrants have entered Europe this year, many from conflict torn Syria and Libya. "It is high time to act." "We are fighting against Islamic State of Iraq and al-Sham [ISIS], why are we not ready to accept those who are fleeing ISIS?" he said. "Now is not the time to take fright, it is time for bold, determined action for the European Union," Juncker said to applause from the European Parliament in Strasbourg. "It is 160,000 that Europe has to take into their arms, this has to be done in a compulsory way. I call on the [European] Council to agree to take 160,000 at the interior ministers' meeting on Sept. 14," he said.

Juncker was referring to a new scheme for binding quotas for the emergency relocation of 120,000 refugees from overstretched Italy, Greece and Hungary, combined with a similar scheme for 40,000 refugees in Italy and Greece that he unveiled in May. But he warned EU member states against making religious distinctions when deciding to admit refugees as he recalled Europe's past of religious persecution. "There is no religion, there is no belief, there is no philosophy when it comes to refugees," Juncker said. "We don't distinguish."

The European Commission would unveil a major new plan for legal migration to the EU in early 2016, in a bid to stem the number of refugees braving danger to come to the continent, he said. Juncker also called for asylum seekers to be allowed to work when their applications are being processed, in a departure from the EU's current rules. "I'm strongly in favor of allowing asylum seekers to work and to earn their own money when their asylum process is underway. Work is a matter of dignity," he said. "We should do everything to change our national legislation to allow refugees to work from Day One of their arrival."

Former Luxembourg premier Juncker insisted that the EU's Schengen passport-free area would not be affected, despite strains caused by efforts to restrict the flow of migrants around the bloc. "This Schengen system will not be abolished under the mandate of this Commission," he said.

Juncker also said the European Commission will take further action "in the days to come" against member states that are not implementing EU asylum rules. "It's a matter of credibility that member states are implementing and respecting commonly agreed international and European laws," he said, announcing a second round of infringement proceedings, which can ultimately lead to hefty fines for non-compliant countries.

Meanwhile, German Chancellor Angela Merkel urged the EU to agree to binding quotas on the sharing of refugees, effectively taking a step further than plans unveiled by the European Commission Wednesday.

The EU's first refugee plan never won full support, and only around 32,000 refugees have been allocated. Hungary was among the countries to reject it, along with the Czech Republic, Slovakia and Poland. Britain, Ireland and Denmark are legally exempt, but could choose to take part.

Rights groups have criticized the EU response, which Amnesty International labeled "piecemeal and incoherent," and urged more support for border countries that are barely coping with the vast influx of people.

On the Greek holiday island of Lesbos, where around 20,000 refugees and migrants have been waiting in squalid conditions to travel to the mainland, a new processing center was set up overnight to help with registrations. Athens has warned the situation is "on the verge of explosion," while tensions are also rising across the Aegean Sea, where around 10,000 more people are stuck on islands as they make their way to Western Europe.

The turmoil in the Middle East and the five-year war in Syria have led many people to flee the conflict in an attempt to seek security and shelter in a more prosperous and peaceful country, such as in Europe. More than 380,000 people have arrived in Europe by sea this year, new figures from the U.N.'s refugee agency UNHCR showed Tuesday, including close to 260,000 who have landed in Greece and 121,000 in Italy. Many are fleeing war and poverty in the Middle East, particularly war-torn Syria, as well as Africa and Asia in search of a better life in Europe, with most headed for top economy Germany.
RELATED TOPICS