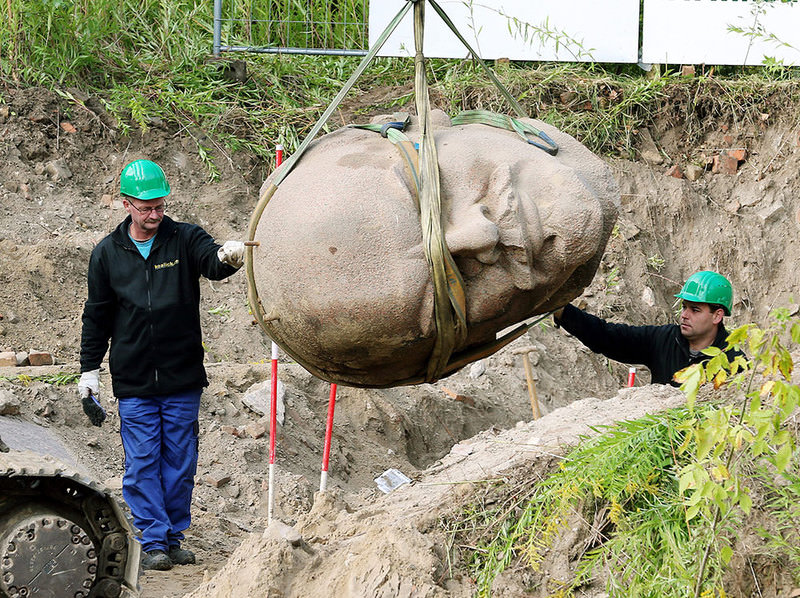 by Sep 10, 2015 12:00 am
A 1.7-metre, red granite head of the Soviet Union founder Vladimir Lenin once displayed in the center of East Berlin is being dug up Thursday, 24 years after its burial following the fall of the Berlin Wall.

The sculpture of the communist revolutionary and Soviet leader will be excavated from a forest on the southeastern outskirts of Berlin, covered up and then transported across the German capital by a flat-bed truck to a museum.

The head used to sit atop a full figure of Lenin in what was once known as Leninplatz, today's United Nations Square. The city of Berlin decided to remove it in 1991, a year after the unification of Germany.

It was cut into about 130 pieces and buried in the woods, a symbol of the burial of the German Democratic Republic of East Germany.

Only Lenin's head will be exhumed Thursday. It is to form the centerpiece of an exhibit called Uncovered: Berlin and Its Monuments, which is to feature about 150 busts and statues from the 1700's to the present day at the Renaissance citadel in Spandau, Berlin's westernmost borough.

Only 20 people are being allowed to witness its excavation although the Berlin government said interest to see it has been enormous. Environmental protection measures at the site are stringent, it said.

It did an about-face after deciding just last year that Lenin was to remain below ground. It argued that there was no money for the project and no one knew exactly where Lenin was buried. Protests of the decision, however, prompted a U-turn.