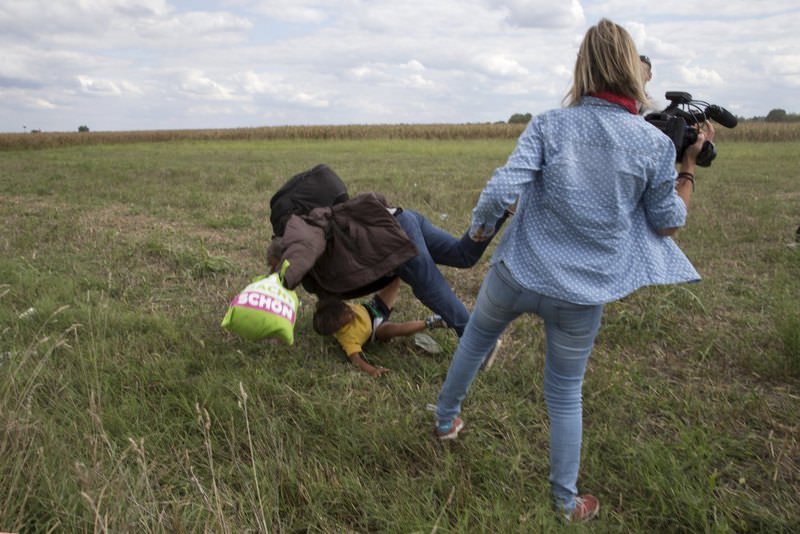 by Sep 10, 2015 12:00 am
A camerawoman for a private television channel in Hungary was fired late on Tuesday after videos of her kicking and tripping up migrants fleeing police, including a man carrying a child, spread in the media and on the internet.

In separate videos, the woman, who was not named by the channel, is seen kicking a girl and tripping up the man carrying a child as hundreds of migrants, many of them Syrian refugees, broke away from police on Hungary's southern border with Serbia. "An employee of N1TV today showed unacceptable behaviour at the Roszke collection point," N1TV, also known as Nemzeti TV, said in a statement. "We have terminated the contract of the camerawoman with immediate effect today."

Szabolcs Kisberk, chief editor at the TV station, told Reuters: "I believe we have done what we had to do in this situation. We don't understand how this could happen, it is shocking and unacceptable." Hungarian news website 444.hu identified the camerawoman as Petra Laszlo. Reuters was unable to reach Laszlo for comment.

Hungary's right-wing government has taken a hard line on the flow of migrants across its borders en route to western Europe, portraying them as a threat to European prosperity and "Christian values". N1TV runs a weekly chat show with Gabor Vona, leader of the far-right, anti-immigration opposition party Jobbik, according to the channel's website. The channel says it stands for "national issues."

Over 150,000 migrants, many of them refugees from conflicts in the Middle East, have been recorded entering Hungary so far this year. Police have been trying to round them up and register them in line with European Union rules, but many migrants refuse, fearing that they will then be forced to stay in Hungary.