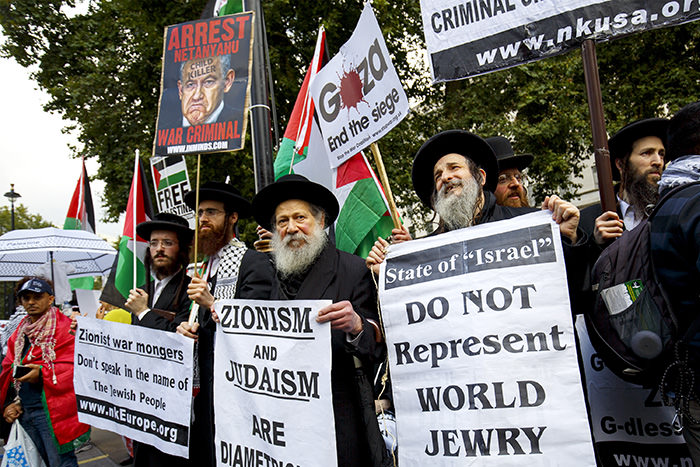 Police intervened to break up the scuffles as around 500 protesters gathered outside Cameron's residence in London ahead of the meeting. "We're here because we feel that Netanyahu should pay for his war crimes," said 21-year-old student Marion Tehami. "We're here to protest and let him know that he's not welcome in our country."

The Israeli leader's focus was firmly on Iran as he touched down, once again criticizing a landmark nuclear deal between Tehran and Western powers agreed on in July. Iran's supreme leader Ayatollah Ali Khamenei said Wednesday that he would not permit negotiations with the United States beyond those that culminated with the deal. "Khamenei is not giving supporters of the agreement any room for illusion," said Netanyahu in response to Khamenei's comments, adding that Iran wanted to "destroy the state of Israel."

"All responsible countries must cooperate in order to stop Iran's terrorism and aggression which, to my regret, will only increase as a result of the agreement," Netanyahu said.

More than 108,000 people have signed a petition urging the arrest of Netanyahu for war crimes, enough for the issue to be considered for debate in Britain's parliament. Britain said visiting heads of state have immunity from the legal process and thus cannot be arrested. In a statement, the government said on Tuesday: "We recognize that the conflict in Gaza last year took a terrible toll. However the prime minister was clear on the U.K.'s recognition of Israel's right to take proportionate action to defend itself, within the boundaries of international humanitarian law."

More than 500 children were among the 2,100 Palestinians, the majority of them civilians, who were killed in last year's conflict. Seventy-three Israelis, almost all soldiers, were killed. Britain is pushing for a two-state solution to resolve the Israeli-Palestinian conflict and "will reinforce this message to Netanyahu during his visit," according to an official response to the petition.
Last Update: Sep 10, 2015 2:39 pm
RELATED TOPICS