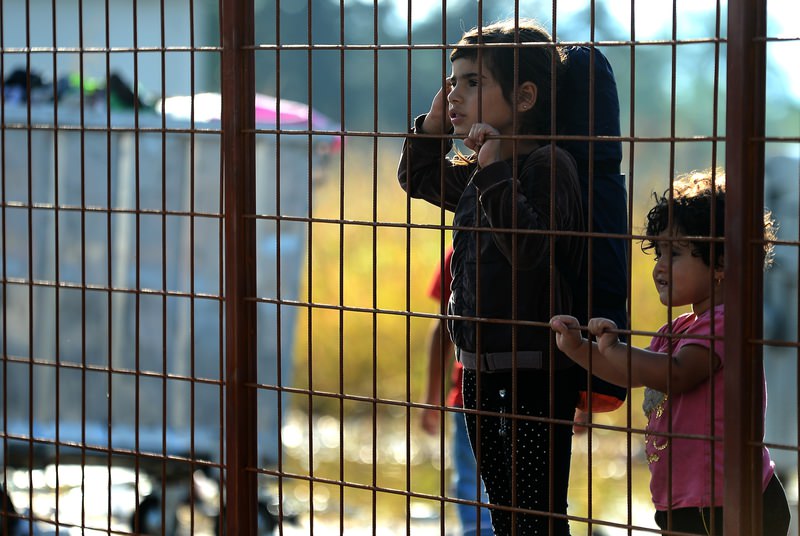 Children wait behind a fence to pass with their families in the southern Macedonian town of Gevgelija, Friday, Sept. 11, 2015 (AP Photo)
by Associated Press Sep 11, 2015 12:00 am
The European Union seems to be split over the ongoing refugee crisis as four Central European nations strongly rejected an EU proposal for mandatory refugee quotas, despite the German foreign minister's warning on Friday which declared the refugee crisis as "probably the biggest challenge for the European Union in its history".

As German Foreign Minister Frank-Walter Steinmeier spoke in Prague, a trickle of refugees marching toward Vienna swelled into a torrent Friday as thousands engulfed a major Austrian highway. Police briefly closed the A4 expressway to Vienna to vehicles because of the potential dangers posed by so many people on its shoulders.

Steinmeier had urged fellow EU nations to give more help to those seeking safety in Europe. Germany has already seen 450,000 refugees enter the country and is expecting at least 800,000 this year, the most in Europe.

"No single country can resolve such a challenge alone we need European solidarity," he told reporters in the Czech capital.

Despite Germany's leading role in the 28-nation bloc, the minister failed to persuade his Czech, Slovak, Polish and Hungarian counterparts to drop their objections to a proposed EU-wide quota system to help refugees already in the EU's most overburdened nations.

"We need to have control over how many (refugees) we are capable of accepting," said Czech Foreign Minister Lubomir Zaoralek, who hosted the meeting.

A frustrated Steinmeier left the joint news conference early, allegedly due to a busy schedule.

The plan to share 120,000 refugees now in Greece, Italy and Hungary among the EU's 28 nations was unveiled Wednesday by European Commission President Jean-Claude Juncker and will be debated Oct. 8 during an emergency EU interior ministers' meeting. An earlier plan to share 40,000 other asylum-seekers among EU nations is expected to get the ministers' final approval on Monday.

Friday's foot march began after rail traffic to Vienna from the Nickelsdorf crossing was sharply reduced due to overcrowding. Buses and taxis then were called to Nickelsdorf to take refugees to Vienna, but thousands decided not to wait and headed off on the 40-mile (60-kilometer) trek.

The march petered out a few hours after it began, as Austrian police and emergency crews persuaded refugees there would be enough buses to Vienna eventually.

The Austrian capital, however, has only been a transit point for many of those arriving over the past week. Most have gone on to Germany. In Munich, authorities said more than 40,000 people have arrived over the past six days.

Tens of thousands of people, many from war-torn Syria, have traveled across the eastern flank of Europe this summer, from Turkey to Greece by sea, over land in Macedonia, Serbia, Hungary and Austria. Tense bottlenecks have developed at those borders, especially since Hungary began building a fence to keep the refugees out.

Hans Peter Doskozil, the police chief of eastern Burgenland, said on Thursday alone 7,500 people had crossed into Austria at Nickelsdorf a number that apparently overwhelmed the Austrian Federal Railways.

Regular trains from Nickelsdorf continued Friday to other Austrian destinations, including Vienna, but the railway company ended its special shuttles for the refugees to Vienna. That shutdown came on top of the company's suspension Thursday of all train service toward Vienna from the Hungarian capital, Budapest, where thousands have overwhelmed the train station.

Hungarian Prime Minister Viktor Orban has been criticized by other EU leaders and human rights groups for what they say is gross mismanagement in housing, feeding and processing the refugees.

Human Rights Watch on Friday released a video from inside a holding facility at the Hungarian border town of Roszke. Metal fences surrounded clusters of tents and divided refugees into groups. Border guards were shown throwing food into the air for desperate refugees to grab.

Peter Bouckaert of the rights group claimed that Hungary was keeping refugees and refugees "in pens like animals, out in the sun without food and water."

Amer Zein, a 31-year-old barman from the Syrian city of Aleppo who crossed into Macedonia on Friday, said he was determined to push on to Germany with his wife, brother and a friend, despite the problems he had heard of in Hungary.

We heard they are hitting people," he said. "We will sit and do whatever the police tell us. We are afraid but we must get through."

Orban defended his government's actions, saying Hungary had little choice but to let people move deeper into Western Europe because they had mounted a concerted rebellion against Hungarian authorities, refusing to stay in state-run shelters and clogging Budapest's central train station, Keleti.

"The illegal imrefugees have occupied the train station. They won't give fingerprints. They don't cooperate. They are not willing to go to the places where they receive provisions: food, water, shelter, health care. They have risen up against Hungary's legal order," he told a Budapest news conference.

Orban expressed hope that his get-tough border security measures, scheduled to begin Tuesday, would limit the flow of refugees and make it easier for Hungary to regain control of its asylum system. He said Hungary intended to catch, convict and imprison people who continued to go under, over or through its recently erected border barriers.

"If they don't cross into Hungary territory legally, we will consider it a crime," Orban said.

He also blamed Greece for letting in so many refugees and urged other EU nations to send reinforcements to help Greece control its porous border.

The International Organization for Migration has put the figure of those arriving in Europe this year at more than 432,000.

Also in Budapest, a Hungarian camerawoman caught on video kicking and tripping refugees near the Serbian border offered a qualified apology Friday. In a letter in the Magyar Nemzet newspaper, Petra Laszlo said she was "sincerely sorry for what happened," but added: "I was scared as they streamed toward me, and then something snapped inside me."

The 40-year-old was fired by the right-wing N1TV online channel after footage went viral. Police have released Laszlo without charges after questioning her on suspicion of disorderly conduct. They say the investigation is continuing.