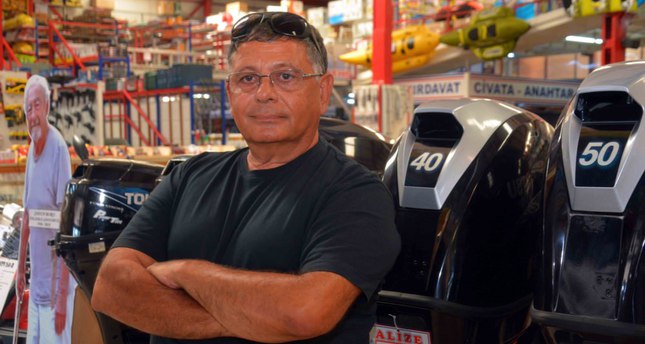 by Anadolu Agency Sep 12, 2015 12:00 am
France suspended its honorary consul in Turkey's southern coastal town of Bodrum on Friday amid allegations that she was selling boats to refugees who are trying to cross to the nearby Greek islands. The consul, Francoise Olcay, was suspended after admitting in a TV report to selling inflatable boats to refugees, France's Foreign Ministry said in a statement on Friday.

Footage from French TV channel France 2 showed Friday that the consul – who was posted in October 2014 – said if she did not sell the boats to the refugees, they would buy them from other shops. But, Consul Olcay's husband, Engin Olcay (R) told Anadolu Agency on Saturday the media was waging a "slander campaign." "We do not have a section saying 'sales for migrants.' We have been selling boat equipment for years here," Olcay said.

"We have 35,000 different products and one of them is lifejacket, the other is boat," he said.

"There is no reason why we cannot sell these products with our heads held high. We have heard some complaints about the matter in the media. I believe they have no idea what they are complaining about."

He said the matter had become news simply because his wife, who was not involved in the day-to-day running of the shop, wanted to help two French journalists.

He said the firm had no links to human smugglers and that anyone who had an identification card could purchase a boat and receive a receipt. "Some people pay intermediaries TL 100 [$32.84] to get them to purchase our products," he said.

Olcay added that they had not received any information from France's General Consulate in Istanbul related to the suspension of the honorary consulship. He said the meetings are ongoing and that a press conference would be held tomorrow on the issue.

Separately, Muğla Governor Amir Çiçek said the companies selling these kinds of products are audited by authorities, and noted that his office too had not received any notification that the honorary consul was suspended.

The Turkish resort town of Bodrum is one of the main destinations for refugees aiming to cross to the Greek island of Kos and head to Europe.

According to the U.N. Refugee Agency, more than 300,000 people have risked their lives to cross the Mediterranean Sea so far this year – mainly From Libya to Italy and from Turkey to Greece. Approximately 2,500 of them have died or gone missing trying to reach the continent this year alone.

Earlier this month, photos of 3-year-old Aylan Kurdi's lifeless body that washed up on a beach near Bodrum seemed to inspire soul-searching in the international community and take a common stance toward the thousands of refugees heading for Europe from conflict zones in Africa and the Middle East.

Olcay also said the death of Kurdi and his brother was a tragedy that could have been averted if the family had purchased one of their lifejackets. "When we talk about this, some try to take our statements out of context just to get higher ratings.