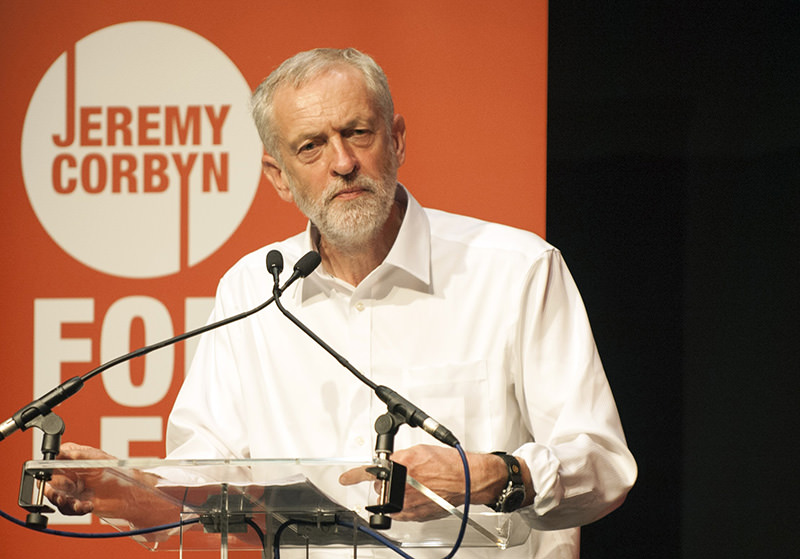 UK's Labour Party's new leader Jeremy Corbyn (AFP Photo)
by Daily Sabah with Agencies Sep 12, 2015 12:00 am
Veteran socialist Jeremy Corbyn was elected leader of Britain's main opposition Labour Party on Saturday in a landslide victory that gives the country its most left-wing political leader in decades. The 66-year-old, whose policies have been compared to those of Greece's Syriza and Spain's Podemos, was named leader after clinching 59.5 percent of the votes cast by Labour supporters.

Corbyn's win is one of the biggest political shake-ups in British politics in decades, marking a sharp left turn for his party and a rejection of the more centrist policies of his predecessors. The new chief could divide Britain's main opposition party and he immediately faced resignations from the shadow cabinet amid warnings from party grandees that a Corbyn-led Labour would be consigned to electoral oblivion. In his victory speech to the party faithful, Corbyn slammed Prime Minister David Cameron's Conservatives for presiding over "grotesque levels of inequality" and for creating "an unfair welfare system."

Meanwhile, British PM Cameron was not very welcoming of the Labour Party's new leader, despite the country's stance as "the cradle of democracy." "The Labour Party is now a threat to our national security, our economic security and your family's security." Cameron said in tweet posted Sunday, harshly criticizing another party's newly elected leader despite his duty as the prime minister.


The Labour Party is now a threat to our national security, our economic security and your family's security.


As the win was announced in a conference center in Westminster, supporters chanted "Jez We Can!" while centrist Labour figures looked shell-shocked. Corbyn later thanked his supporters in a nearby pub, where he joined in a rendition of the traditional Labour anthem "The Red Flag."

"It's a fantastic moment for change in Britain," he told reporters as he arrived at the venue.

The veteran MP has said he will oppose Britain joining in airstrikes against the Islamic State of Iraq and al-Sham (ISIS) over Syria and has been ambiguous on his stance on an upcoming referendum on Britain's EU membership. Addressing tens of thousands of people at a pro-refugee rally in London later on Saturday, Corbyn alluded to Cameron's reference to airstrikes as part of the solution to the refugee crisis. "Tragically wars don't end when the last bullet is fired... Surely our objective ought to be to find peaceful solutions to the problems of this world," said Corbyn, a founder of the Stop the War coalition that organized mass rallies against the Iraq War.

As support for anti-austerity parties swells across Europe, Greece's hard-left Syriza welcomed Corbyn's election, saying it represented a "message of hope" and would bolster a "pan-European front" against crippling spending cuts. Spain's leftist Podemos leader Pablo Iglesias tweeted that Corbyn's triumph was "a step forward towards a change in Europe for the benefit of the people."

In a campaign driven by protest groups and trade unions, Corbyn comfortably beat the more centrist Yvette Cooper, Andy Burnham and Liz Kendall - who all had far stronger support from fellow Labour MPs. Corbyn has electrified Labour's leadership race, which was triggered by the resignation of Ed Miliband after he lost May's general election to Cameron's center-right, pro-austerity Conservatives. His chances at the next 2020 general election are thought to be slim but the Conservative Party was quick to react to his victory with a statement calling him a threat to national security. "Labour are now a serious risk to our nation's security, our economy's security and your family's security," Michael Fallon, the defense minister, said in a statement.

Labour was thrown into turmoil by Cameron's shock election win because his previous coalition administration, which shared power with the centrist Liberal Democrats, had implemented billions of pounds of deeply unpopular austerity cutbacks.

Corbyn's policies include spending more on public services like schools and hospitals, scrapping nuclear weapons, renationalizing industries like the railways and involving such groups as Hamas and Hezbollah in Middle East peace talks. He drew strong support from students who had never voted before as well as from older people disillusioned with Labour since it moved to the center-ground of British politics under former prime minister Tony Blair in the 1990s. Corbyn has been lawmaker for some 30 years but has never held a government office. He has been a fixture at left-leaning demonstrations for even longer, championing causes from nuclear disarmament to stopping the Iraq war.

While many Labour deputies praised his personal qualities, several indicated they would not be prepared to serve in the shadow cabinet under his leadership. Labour health spokesman Jamie Reed posted his resignation letter on Twitter, citing Corbyn's anti-nuclear policies as "fundamentally wrong." Pensions spokeswoman Rachel Reeves also tweeted that she would not be returning to the shadow cabinet after the end of her maternity leave in January. Former leader Ed Miliband said he hoped Corbyn "reaches out to all parts of the party." "I hope... that Jeremy reaches out to all parts of the party because he has a big job to do to seek to unite the party".

Under the last two Labour leaders in power, Tony Blair and Gordon Brown, Labour shed its commitment to nationalizing industry and wooed big business. But since Labour lost power in 2010 and suffered even worse losses to Prime Minister David Cameron's Conservatives in this year's election some activists believe it was time to return to the party's roots. Tony Blair - Labour's most electorally successful leader who is now deeply unpopular over Iraq - warned before the result was announced that Corbyn's victory would split Labour and consign the party to electoral oblivion. Blair referred to Corbyn's policies as "fantasy." Corbyn however has won the Labour crown by a more impressive margin than Blair, who won 57 percent support at his leadership contest in 1994.

David Cameron of the Conservative Party won a landslide victory in the 2015 UK general elections in May and increased the party's MPs to 331. Following the announcement of the results, the leader of the U.K. Independence Party Nigel Farage, the Liberal Democrat Leader Nick Clegg and Ed Miliband of the Labour Party made their resignation public.