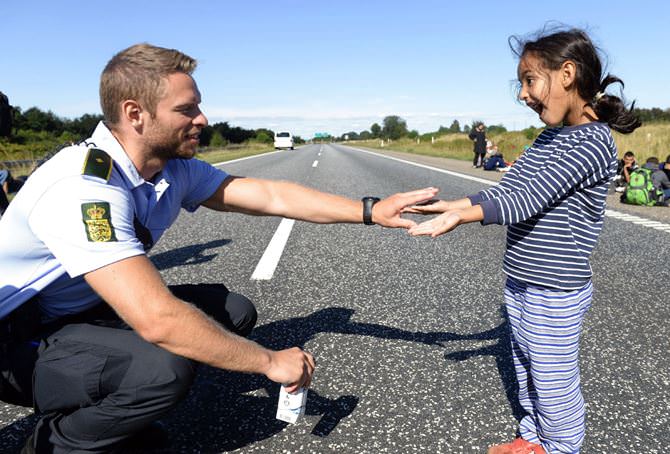 |Photo by Michael Drost-Hansen
by Rahmi Osman Kaçmaz Sep 13, 2015 12:00 am
Photos of a Danish police officer playing games with a Syrian refugee child went viral, but it didn't change the contradicting attitude of Denmark on the issue of Syrian refugees.

Denmark's Integration Minister Inger Støjberg said on Friday that she saw "simply no reason" to take in Syrian refugees and that Denmark will not take part in the EU's plan to settle 160,000 asylum seekers.

"We have an opt-out – it is very well-known that we won't participate in the redistribution of these 160,000 therefore I don't think this is in any way something dramatic from a Danish viewpoint," she said.

Denmark has also tried to scare off refuge seekers by advertising in four Lebanese newspapers with an unmistakable message: We don't want you in Denmark.

In the advertisements, Denmark announced cuts in provision and tighter regulations for refuge seekers. Social assistance would be reduced by up to 50 percent for new coming refugees, while receiving a permanent residence requires one to fully understand and speak Danish.


Denmark trying to scare off would-be migrants with these ads in #Lebanon media: pic.twitter.com/8uQasJJBF6


Given Denmark's bitter policy on Syrian refugees, the photo of the Danish police officer on social media raises doubts about whether the coverage could be part of media manipulation.

348,540 asylum applications have been lodged to European countries between April 2011 and July 2015 according to the UNHCR. 11,296 of the applications were lodged to Denmark.

Roughly half of Syria's population has been displaced by the violence which started more than four years ago, with over four million Syrians now seeking refuge in neighboring countries.

Turkey is currently the most significant host of Syrian refugees with more than two million people, followed by Lebanon and Jordan, both hosting more than one million refugees each.