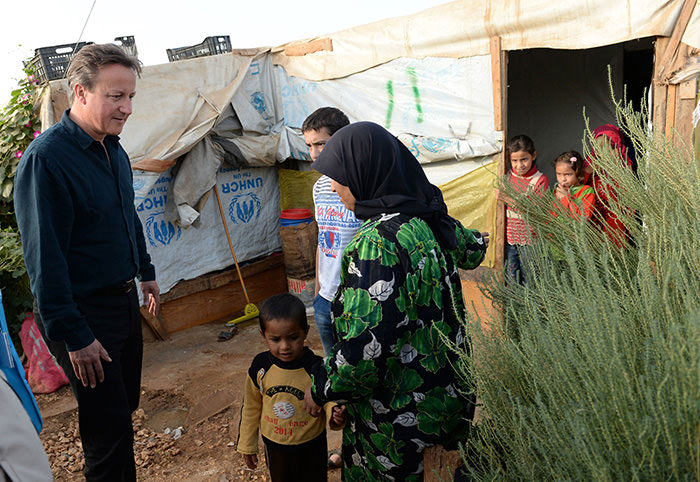 UK's Prime Minister David Cameron (L) meets Syrian refugees in the Bekaa Valley on the Lebanese-Syrian border on September 14, 2015 (AFP Photo)
by Daily Sabah with AFP Sep 14, 2015 12:00 am
British Prime Minister David Cameron toured a Syrian refugee camp in Lebanon yesterday on a one-day visit to discuss the refugee crisis gripping the Middle East and Europe two days after far-left lawmaker Jeremy Corbyn was elected leader of the main opposition Labour Party and made a speech at a rally supporting the rights of refugees.

The British premier met refugees at a camp outside the town of Terbol in the Bekaa valley in eastern Lebanon, an AFP correspondent reported. Lebanon hosts more than 1.1 million Syrian refugees, many of whom live in informal tented settlements in the arid valley. Cameron said he wanted "to see for myself and to hear for myself stories of refugees and what they need."

"I'm at a refugee camp in Lebanon, hearing some heartbreaking stories," he tweeted. "British aid is doing so much to help." He said Britain was already the second largest donor to Syrian refugee camps in the region. "We will go on doing that including increasing the amount of money we are giving to educate Syrian children here in Lebanon and elsewhere," he said. "I think that's absolutely vital."

Cameron was also due to hold talks on the refugee crisis with his Lebanese counterpart Tammam Salam. A statement from his office said he had named Richard Harrington to a new junior ministerial post in charge of overseeing Syrian refugee resettlement. The British premier has been under pressure internationally and domestically to address the refugee crisis, and vowed last week to "help to stabilize countries where the refugees are coming from."

Britain has accepted 216 Syrian refugees over the past year and granted asylum to less than 5,000 since the conflict broke out in 2011 - far fewer than other European countries like France, Germany and Sweden. In total, more than 4 million Syrians have fled abroad.

Cameron's office meanwhile released details of how an additional package of 100 million pounds for Syrian refugees, which he announced last week, will be spent. Forty million pounds of it will be allocated to the United Nations and other non-governmental organizations working with refugees in Jordan, Lebanon and Turkey. "For thousands of refugees this money means a meal for their families, the security of a home with basic sanitation and clean water," Cameron said. "Without our investment in international development, the numbers of people seeking to embark on a perilous journey to Europe would be far greater."

Meanwhile, Cameron was not very welcoming of the Labour Party's new leader. "The Labour Party is now a threat to our national security, our economic security and your family's security." Cameron said in tweet posted Sunday, harshly criticizing another party's newly elected leader despite his duty as the prime minister.
Last Update: Sep 14, 2015 2:27 pm
RELATED TOPICS