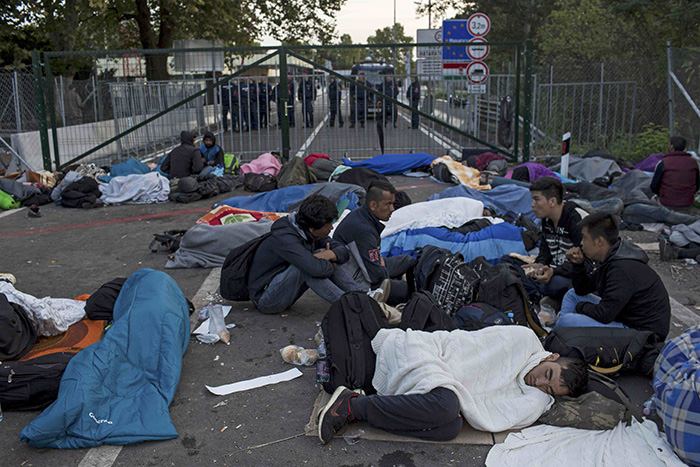 Refugees rest in front of a fence as they wait to enter Hungary, after the Hungarian police sealed the border with Serbia, September 15, 2015 (Reuters Photo)
by Associated Press Sep 15, 2015 12:00 am
A spokeswoman for the U.N.'s refugee agency says it's "deeply disappointed that more bold decisions weren't taken" at an EU meeting about Europe's refugee crisis.

Melissa Fleming on Tuesday welcomed an announcement by the European Union on Monday in Brussels to increase funding for UNHCR though it doesn't know the figure.

She said the Geneva-based U.N. agency is hopeful the EU will make a decision about handling the refugee crisis better in coming weeks, but "up until then I think we are going to continue to live with chaos."

Meanwhile, The International Organization for Migration (IOM) is predicting more deaths in the Aegean Sea and increased strains on Greece because of EU "indecision" about how to handle an influx of refugees and refugees to Europe.

IOM spokesman Leonard Doyle said Tuesday that decisions by some European countries to clamp down travel across their borders might have a "domino effect" and affect countries like Greece, where it's harder to stop people mostly Syrian refugees from crossing from the Turkish coast.

Some refugees have called into an anti-human trafficking phone hotline set up by IOM while they are treading water in the Aegean.

The International Organization for Migration estimates that more than 464,000 refugees have crossed the Mediterranean to Europe this year. More than 181,000 of those are Syrians mostly fleeing between Turkey and Greece.