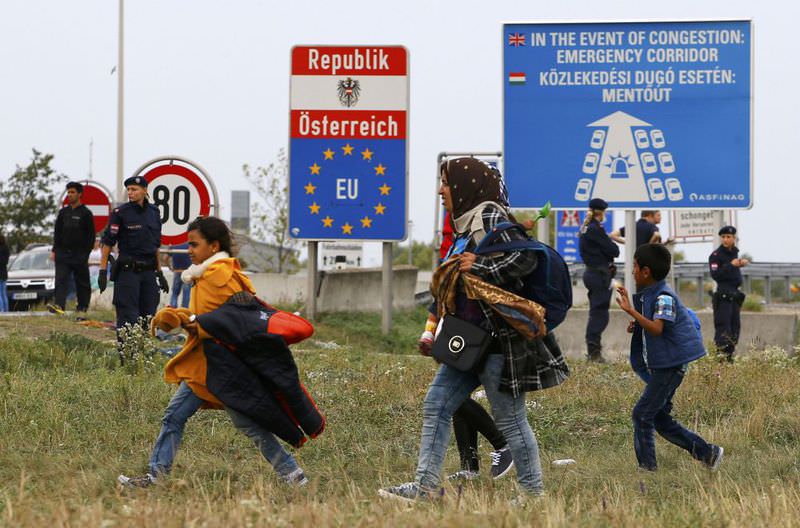 Migrants walk away from the border crossing from Hungary in Nickelsdorf, Austria.
by Daily Sabah with Agencies Sep 15, 2015 12:00 am

As Germany re-imposed border controls with Austria following a record influx of Syrian refugees into the country, Europe's system of open borders, commonly known as the Schengen area, is now under pressure

Germany reintroduced border controls on Sunday after admitting it could no longer cope with a record influx of migrants, tightening the screws ahead of a key EU meeting on spreading the burden of the refugee crisis across the bloc. Slovakia also joined Berlin in reintroducing border checks with Austria, underscoring the need for European Union nations to quickly forge a common strategy to deal with Europe's immigration crisis.

Germany is a preferred destination for many people fleeing Syria's civil war and other troubled nations in the migration crisis that has bitterly divided Europe. More than a week ago, Germany and Austria agreed to let in migrants who had massed in Hungary, saying it was a one-time measure to ease an emergency. The flow has continued undiminished, and while Germans have remained welcoming, officials said the numbers were straining the country's ability to provide accommodation. Berlin has become increasingly frustrated with the reluctance of many other countries in the 28-nation European Union especially those in the former Eastern bloc to share the burden of hosting the newcomers. Sunday's action, focusing on the Austrian border, came a day before a meeting of EU interior ministers to discuss the crisis.

Germany's re-imposition of border controls with Austria has brought home the risks the summer refugee crisis poses to Europe's system of open frontiers, commonly known as "Schengen," one of the cornerstones of the European integration project since it was created in the 1990s. Under the Schengen rules, a member state like Germany may "exceptionally" reinstate controls at its borders with fellow members like Austria "if there is a serious threat to public policy or internal security," but usually for no more than 30 days.

In such an event, the European Commission, or the executive of the 28-nation European Union, the European Parliament and other Schengen countries must be informed. The commission said Germany's decision appears to be a "situation covered by the rules" of Schengen, but added its goal is to return to normal open borders as "soon as feasible."

"The aim of this measure is to stop the current influx to Germany and to return to an orderly process," Germany's Interior Minister Thomas de Maiziere said. Asylum seekers must understand "they cannot choose the states where they are seeking protection," he told reporters, as Germany also temporarily halted all train traffic to and from Austria. He did not specify how long the border controls would remain in place or how exactly incoming migrants would be handled, saying only that Germany will continue to observe national and European rules on protecting refugees. The German Vice-Chancellor Sigmar Gabriel blamed "European inaction" on the crisis and said Germany already did what it could do. Germany's national railway, Deutsche Bahn, said it had suspended service from Austria to Germany for 12 hours at the orders of authorities.

Commission President Jean-Claude Juncker, informed by German Chancellor Angela Merkel of Sunday's move, was quick to issue a statement saying Berlin was not breaking Schengen rules. These permit renewed frontier controls as a "last resort" where there is "a serious threat to public policy or internal security." Such exemptions are subject to EU review and varying time limits, ranging from 10 days to, very exceptionally, two years.

Germany's actions were welcomed by Hungary's hardline Prime Minister Viktor Orban, whose own country is building a fence along its border with Serbia to keep migrants out. "We understand that this decision was necessary in order to defend Germany's and Europe's values," he told Bild newspaper. The Czech Republic said it would also boost security on the border with Austria.

German Chancellor Merkel earlier warned that the passport-free Schengen zone was under threat if the EU failed to work together on coping with the crisis. "If we don't arrive at a fair distribution then the issue of Schengen will arise - we don't want that," she said.

It is not the first time Germany has re-imposed passport controls. Berlin partially lifted the Schengen pact with its neighbors ahead a G7 summit held in the Bavarian Alps last June, in a bid to prevent violent protests. And in 2008, Austria reinstated border controls to tighten security when it was hosting a European football championship with Switzerland.

But Germany's decision on Sunday will likely fuel publicly expressed fears from EU leaders and officials that the Schengen system may not withstand the pressure from the worst refugee crisis in Europe since World War II. Twenty-two EU countries, plus non-EU Norway, Switzerland, Iceland and Liechtenstein are part of Schengen. The six EU countries that do not participate are Britain, Ireland, Bulgaria, Romania, Cyprus and Croatia.

Europeans, the commission says, make more than 1.25 billion journeys within the Schengen area every year. The Schengen area guarantees free movement to more than 400 million EU citizens, as well as to many non-EU nationals, businessmen, tourists or other persons legally present on the EU territory.

The turmoil in the Middle East and the five-year war in Syria have led many people to flee the conflict in an attempt to seek security and shelter in more prosperous and peaceful countries. The International Organisation for Migration said Friday that more than 430,000 people have crossed the Mediterranean to Europe this year, with 2,748 dying en route or going missing. The 57-member Organisation of Islamic Cooperation meanwhile urged the United Nations on Sunday to consider a peacekeeping force for Syria to help stem the flow of people trying to reach Europe. Despite the serious crisis threatening the continent, especially Eastern European countries still resist not to share the burden.
RELATED TOPICS