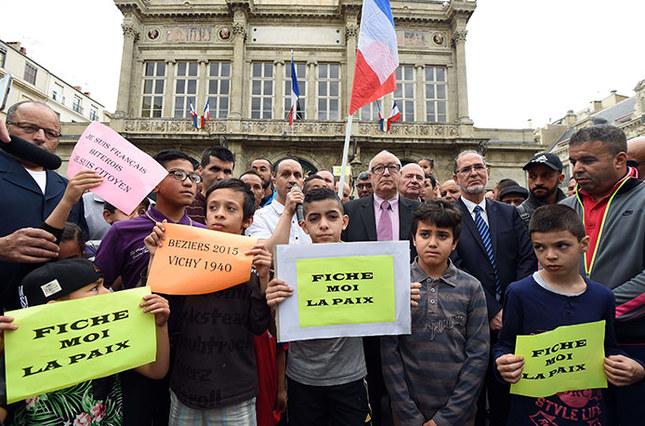 People demonstrate against Beziers mayor Robert Menard, on May 8, 2015 in front of the city hall of Beziers. AFP PHOTO)
by Daily Sabah Sep 15, 2015 12:00 am
The mayor of France's southern town of Beziers, far-right politician Robert Menard, paid a visit to a social housing where refugees stay, during which he's seen in a video published on September 11 saying, "You're not welcome here."

The video which went viral on social media shows the mayor encountering the Syrian refugee with police officers and a translator.

"You entered here by breaking the doors. You are stealing water and electricity. You should not be occupying these apartments," the mayor adds.

In May 2015, France was shaken by a scandal concerning ethnic and racial profiling of Muslims perpetrated by the same mayor. Menard had confessed that he kept files on a number of Muslim students in his town.

Speaking on T.V. channel France 2, he claimed he had statistical information on the religious affiliations of students enrolled in schools in his town, claiming that 64.6 percent of them were Muslim.

The illegal act of filing information on students came under fire from French political leaders. French Minister of Education Najat Vallaud-Belkacem said that the mayor's act was "deeply anti-Republican," and that "filing is illegal for a mayor who represents the state in his town." French Prime Minister Manuel Valls said, "The Republic makes no distinction among its children."

The turmoil in the Middle East and the five-year war in Syria have led many people to flee the conflict in an attempt to seek security and shelter in more prosperous and peaceful countries. The International Organization for Migration said Friday that more than 430,000 people have crossed the Mediterranean to Europe this year, with 2,748 dying en-route or going missing.
Last Update: Sep 15, 2015 10:29 am
RELATED TOPICS