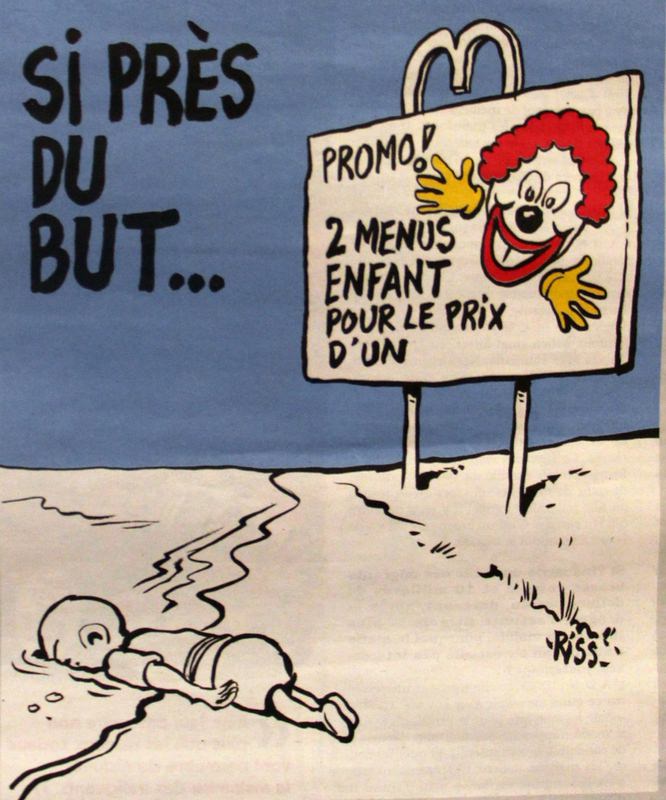 by Daily Sabah Sep 16, 2015 12:00 am
Legal action may be taken against the controversial French satirical magazine Charlie Hebdo for inciting hate after its latest issue featuring cartoons depicting the late 3-year-old Aylan Kurdi, whose lifeless body washed ashore in the southwestern city of Bodrum two weeks ago, Al-Jazeera reported yesterday.

Mocking the death of the toddler, the cartoon was titled "So close to his goal." The cartoon featured the dead body of the toddler washed ashore in front of a billboard with a McDonald's ad that said, "Two children's combos for the price of one." The second cartoon, which was titled "The proof that Europe is Christian," featured a man – supposedly Jesus Christ – standing on water saying, "Christians walk on the water," and a toddler sinking into the sea saying, "Muslim children sink."

The cartoons received harsh criticism on Twitter with some users describing it as tasteless and disrespectful to the memory of Kurdi after the pages started to circulate on social media. Al-Jazeera reported that Peter Herbert, chair of the Society of Black Lawyers, tweeted the group: "will consider reporting this action as incitement to hate crime & persecution before the International Criminal Court."