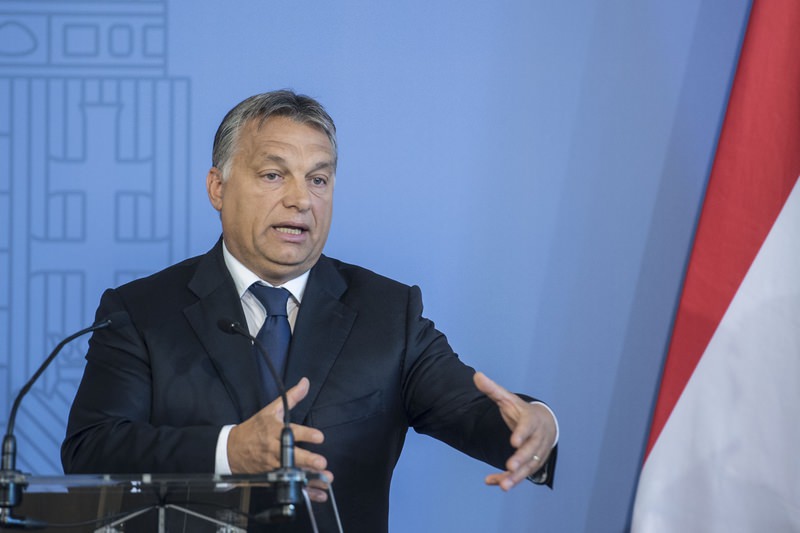 Hungarian Prime Minister Viktor Orban delivers a speech in Budapest, Hungary, September 7, 2015. (AA Photo)
by Daily Sabah Sep 17, 2015 12:00 am
Hungarian Prime Minister Viktor Orban praised Turkey for its 'tremendous effort' to tackle the refugee crisis and said "We [Europe] should celebrate a mass each week for the Turkish president (Recep Tayyip Erdoğan)" in an interview with the German daily Bild.

Orban said "Turkey has been doing tremendous things about refugees fleeing from Syria-and a lot more than anyone else," in the interview.

Emphasizing that the European Union should provide funds to (Syria's) neighboring countries-primarily Turkey- Orban suggested that every country should pay "1 percent extra into the EU budget and at the same time reduce spending for other purposes by 1 percent".

Orban added that Europe couldn't "let down countries like Turkey" or "be stingy with them".

PM Orban also asserted that the Syrian refugees already had a safe place to stay in the refugee camps surrounding Syria and the historical influx of refugees was coming from the camps and not the war zone itself.

Remarking that the refugees were only seeking a better life, Orban highlighted that "one does not have a fundamental right to a higher standard of living" but "only a right to safety and human dignity".

Orban relayed that the EU leaders are "living in a fantasy world" by implementing quotas for a fair distribution of thousands of refugees across EU member states.

The Hungarian PM emphasized that his country would continue to reject the proposed quotas as to protect the Schengen Zone's external borders.

He underlined that if Europe was to allow all refugees, then it "would be destroyed".

On Friday at a meeting in Prague, the foreign ministers of Hungary, the Czech Republic, Poland and Slovakia strongly rejected the proposed EU-wide quota system to help refugees already in the EU's most overburdened nations, despite Germany's warnings and persuasion efforts in the 28-nation bloc.

The plan allows for the distribution of 120,000 refugees now in Greece, Italy and Hungary among the 28 EU member nations.

Orban had previously said that the influx of refugees into Europe threatens to undermine the continent's Christian roots and governments must control their borders before they can decide how many asylum seekers they can take.

Hungary is building a 175 kilometer-long fence along its border with Serbia to keep out an accelerating flow of migrants entering from the south.