Refugees in Europe head toward Croatia after border closures 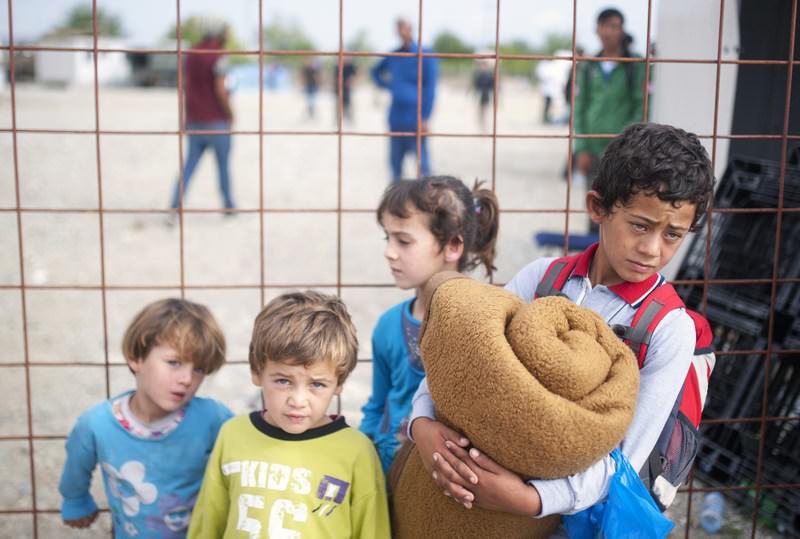 Children stand next to a fence as migrants and refugees wait in a camp to register after crossing the Macedonian-Greek border near Gevgelija.
by Daily Sabah with Agencies Sep 17, 2015 12:00 am

After EU ministers failed to agree on a quota plan for refugees, Hungary's move to re-impose border controls created a domino effect across central Europe as refugees have started to cross the Croatian border in search of a new route

Migrants began to cross from Serbia into Croatia on Wednesday, desperate to find a new way into the European Union after Hungary sealed its border fence and a string of EU countries tightened frontier controls in the face of an unprecedented human influx.

Pressure is building for a special EU summit to come up with solutions to the crisis, with the bloc bitterly split and free movement across borders - a pillar of the European project - in grave jeopardy.

A small group of mostly women and children entered EU-member Croatia near Tovarnik yesterday, the first in what could be a new surge of migrants attempting to reach the bloc by circumventing a razor-wire fence erected by Hungary. Others were heading towards the frontier, with a group of 30 to 40 mostly Syrian and Afghan migrants turning up in buses at the Serbian border town of Sid. "We heard that Hungary was closed so the police told us we should come this way," Amadou, 35, from Mauritania in western Africa, told AFP. Refugees entering Croatia will be allowed to pass through and continue their journey to western Europe, Croatian Prime Minister Zoran Milanovic said yesterday, confirming around 150 had already entered from Serbia overnight. "Croatia is entirely ready to receive or direct those people where they want to go, which is obviously Germany or Scandinavian countries," Milanovic told parliament. "They will be able to pass through Croatia and we will help, we're getting ready for that possibility," he said.

Hundreds more desperate people were trapped Tuesday behind the fence hastily erected by Hungary along its border with Serbia in an attempt to block the migrant flow through the Balkans. Hungary's conservative Prime Minister Viktor Orban has announced plans for a similar barrier on its frontier with Romania, prompting outrage from its southern neighbor. But Budapest insisted its fence was working as it made the first arrests under tough new laws which punish "illegal border-crossing" or damaging the fence with prison terms of up to three years. Hungarian police said yesterday that only 367 migrants crossed into Hungary on Tuesday, the first day of tough laws to punish unauthorized entry into the country, and all were arrested. The controversial measures are part of Orban's strategy to stem the flow of migrants - more than 200,000 of whom have entered his country so far this year - trudging up towards Hungary through the western Balkans, most headed to Germany and Sweden. But the apparent success of the fence in deflecting the flow sparked fears in Serbia that it would be swamped by an unmanageable number of migrants.

Serbia's minister for refugees, Aleksandar Vulin, urged Hungary to reopen its border, "at least for women and children," speaking to AFP at the Horgos crossing, where around 100 people were waiting for the frontier to reopen. Hungary's hardline stance has been sharply criticized, with the U.N. refugee agency saying it could be in violation of the 1951 Refugee Convention.

The Council of Europe also said it was "concerned" about the new legislation and would press Orban for an explanation. Romania, which is a member of the EU but not of the passport-free Schengen zone, criticized the fence Hungary was planned along its border as "out of step with the spirit of Europe." The Hungarian move came as a domino effect of reintroduced border controls took hold across central Europe, which is grappling with its biggest migratory wave since the end of World War II.

Germany, Austria and Slovakia have introduced identity checks on parts of their border, and Poland and the Netherlands are considering whether to follow suit.

Politically, the big concern is for the future of the 20-year-old Schengen agreement, by which participating EU countries agree to scrap internal border checks. Schengen is considered by many EU supporters as important as the euro in terms of its role in the European project. By boosting mobility and reducing bureaucracy, it provides a powerful economic boost and enhances the notion of a common European identity, they say.

German Chancellor Angela Merkel and her Austrian counterpart Werner Faymann on Tuesday called for a special EU summit next week to debate the crisis. "Time is running out," Merkel warned, urging an end to the squabbling that has flared since eastern members flatly refused to accept EU-set quotas for taking in tens of thousands of refugees.

European President Donald Tusk has said he will announce a decision about the summit on Thursday. In the meantime, EU interior ministers are to meet again next Tuesday in a fresh bid to resolve the quota wrangle.

EU interior ministers failed to reach an unanimous agreement on Monday on a plan for binding quotas to relocate 120,000 refugees amid fierce opposition from Eastern Europe. The turmoil in the Middle East and the five-year war in Syria have led many people to flee the conflict in an attempt to seek security and shelter in more prosperous and peaceful countries, such as those in Europe. The EU's border agency said more than 500,000 refugees have arrived at the EU's borders this year, almost doubled since last year. Syria's neighboring countries – Turkey, Lebanon, Jordan and Iraq – are the countries hosting the largest number of Syrian refugees with nearly 4 million Syrians.
RELATED TOPICS