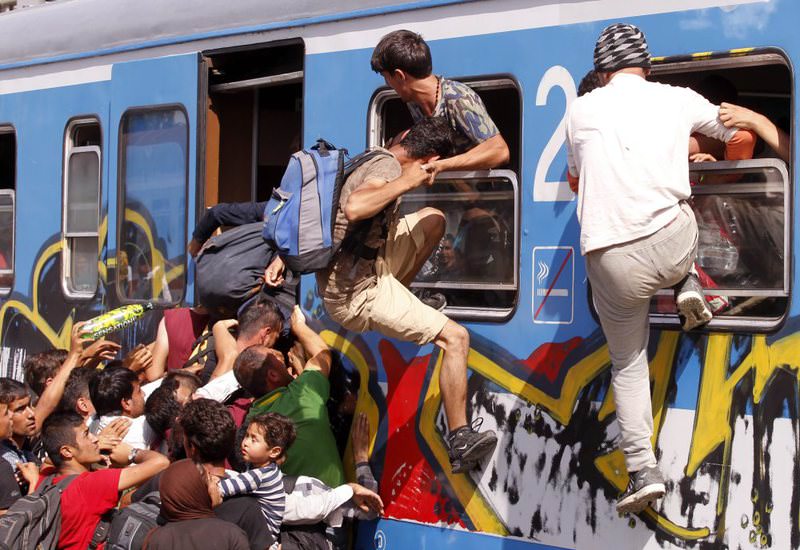 Migrants push and climb through windows to get onto a train bound for Zagreb at the train station in Beli Manastir, Croatia.
by Daily Sabah with Agencies Sep 19, 2015 12:00 am

Amid a deep rift between western and eastern EU member states, Balkan land routes to northern Europe have been closed to refugees. Croatia, the latest hotspot after Hungary sealed its border with Serbia, says it is overwhelmed by the large volume of refugees

Road and rail routes to northern Europe from the Balkans were closed to migrants Friday, after a string of countries closed their borders to refugees. The crisis, challenging the EU's humanitarian reputation and its policy of open borders, triggered an emergency summit of the 28-nation bloc on Wednesday. Desperate to reach Germany and Sweden -- seen as welcoming havens of peace and prosperity -- thousands of refugees traveled by car, bus and train, reaching the southern EU rim in Serbia. But Hungary sealed off its border with Serbia on Tuesday, pushing the flow to Croatia, a fellow EU member.

After initially vowing to let the refugees through, Croatia on Thursday said it was overwhelmed by the influx and closed seven of its eight crossing points with Serbia. "Up to now, we have registered 13,000 migrants on Croatian territory," Interior Minister Ranko Ostojic told N1 television station on Friday. "This figure means that our capacities to take in more are saturated." Migrants tried to continue their northward trek by train through Croatia's neighbor, EU member Slovenia, which then announced it was suspending all Croatian rail links until late Friday.

Scenes of chaos and despair at the Croatian-Serbian border brought home the human scale of the problem. Thousands were camped in fields around the rural town of Tovarnik on Friday; its little train station has become the latest flashpoint in a months-long drama.

A train there had been waiting to leave since 4:00 a.m. (0200 GMT), Peter Bouckaert, Human Rights Watch emergencies director, told an AFP reporter. "It's pretty dramatic. People are getting very angry," he warned. "It's complete chaos. There are still thousands waiting after spending a rough night with little food or shelter. This is a one-street town that is completely overwhelmed." Bouckaert added, "If people avoid the official crossing, they could end up in landmine fields."

Babar Baloch, a spokesman for the UN refugee agency UNHCR, said more people were arriving there from Serbia: "More and more people are coming from Serbia. I've seen 60 Syrians that just arrived, and one young man said there were 1,000 more behind them."

In Harmica, a small village on the Croatian side of the border with Slovenia, a couple in their 30s with a four-year-old boy and a nine-year-old girl detailed their grueling trip through Europe to escape the fighting in Syria. "We've been traveling for six days, first across the sea and then through Greece, Macedonia and Serbia," the young woman said, adding, "We left Syria because of the war; we want to get to Germany."

Hungarian Premier Viktor Orban announced Friday that hundreds of troops had begun laying a razor-wire barrier along the country's border with Croatia. The barrier will add to a fence that Hungary has set down alongside its border with Serbia. "Forces are being redeployed: 600 soldiers are already at the scene, 500 will arrive there in the course of the day, and several hundred at the weekend. Two hundred police have been assigned to the Croatian border," Orban said. "There will be no molehill to hide behind; we will defend our borders."

Thousands of people, many of them Syrians fleeing war, have sought refuge in the EU this year. The influx -- the greatest migratory flow in Europe since the end of World War II -- has dug a deep rift between western and eastern EU members. EU nations are battling over how, or whether, to share the refugee flow. Germany on Friday warned that it could invoke EU's majority voting system to force reluctant states to accept quotas of migrants. Another worry is that the proliferation of frontier controls in the EU could wreck the Schengen accord, a pillar of the European project that allows borderless travel between member states.

Germany, Austria and Slovakia have all re-imposed identity checks on parts of their borders, and Poland and the Netherlands are considering whether to follow suit. And under a draft law seen by AFP, German Interior Minister Thomas de Maiziere is seeking to toughen asylum laws by sending migrants back to the first EU country they reached and by reducing benefits. If passed, the law would represent a major reversal to Germany's easing of asylum laws for Syrians, a factor contributing to the influx that has left Germany bracing for up to a million asylum seekers this year.

The turmoil in the Middle East and the five-year war in Syria have led many people to flee the conflict in an attempt to seek security and shelter in more prosperous and peaceful countries, such as those in Europe. A record 473,887 refugees and migrants have crossed the Mediterranean to Europe so far in 2015, the International Organization for Migration said on Friday, including at least 182,000 Syrians - almost 40 percent of the total. The total represents an increase of almost 9,000 from the total the Geneva-based agency gave on Tuesday. But the rate of increase has slowed. On Tuesday, the IOM said the number of crossings had jumped by more than 32,000 since the previous Friday.
RELATED TOPICS