Polls show no clear winner in Greek election on Sunday 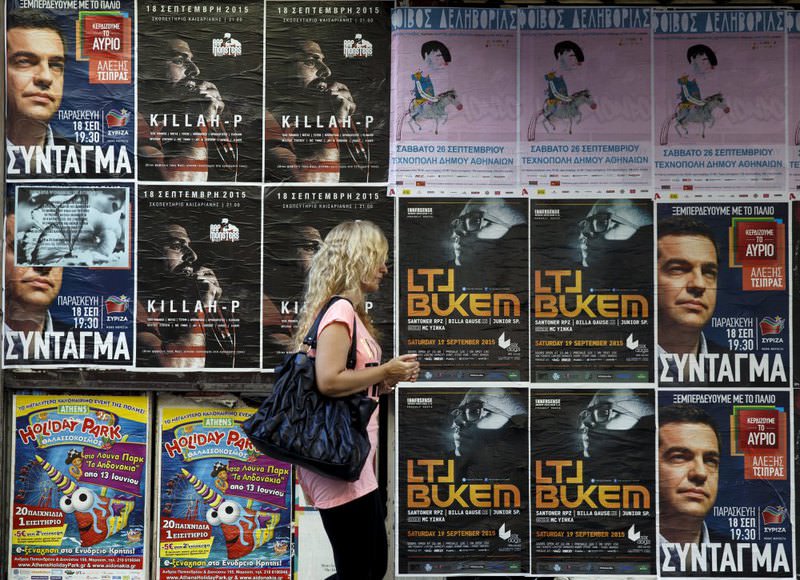 by Daily Sabah with Reuters Sep 19, 2015 12:00 am
An election campaign in Greece ends on Friday with opinion polls giving no clear winner, setting the stage for a cliffhanger vote on Sunday between the political left and right, and the near-certainty the next government will be a coalition.

Five opinion polls on Thursday and Friday underlined the tightness of Greece's election campaign, offering different outcomes but all pointing to no outright winner when ballots are cast. The winner of Sunday's vote will need to oversee deep economic reforms required for an 86-billion-euro bailout brokered in August, a recapitalisation of the country's banks, and the unwinding of capital controls imposed this year to prevent an implosion of the financial system.

All the polls showed the leftist Syriza party of former prime minister Alexis Tsipras and the conservative New Democracy of Vangelis Meimarakis within spitting distance of each other. In each poll, however, neither party came close to the 38 percent threshold widely believed to be needed to establish a majority in the 300-seat parliament. Of the five polls published on Thursday and Friday, two put Syriza ahead, two had New Democracy ahead, and one was a tie.

Given that Greece's compliance with the 86 billion euro bailout programme is at issue, many at EU headquarters in Brussels and in other European capitals would like to see a broad coalition emerging from the election. But Syriza and New Democracy, while both pledging to uphold the bailout terms, disagree on pivotal matters such as freeing up the labour market, collective bargaining and immigration.

Syriza, forced to concede the bailout in August with the threat of a disorderly exit from the euro zone looming over the country, has ruled out any pact with New Democracy. It regards that party as part of an old guard partly responsible for Greece's economic woes. "I didn't give up the struggle. I took the stance of responsibility after a great deal of effort for this country to remain standing," Tsipras said in a televised interview on Thursday night, referring to bailout talks. "The crucial (question) at the ballot box is whether there will be a progressive force with Syriza, or a conservative one with New Democracy."

New Democracy has been keen to highlight perceived credibility issues under Syriza, which swept to power in January on the promise of ridding the country of bailouts, only to agree to new stringent austerity terms six months later. "The question is clear. Should we listen to false promises and wishful thinking, or move forward responsibly and with a national plan?" New Democracy leader Vengelis Meimarakis told cheering supporters in a central Athens square. "It's high time we did away with incompetence. The Syriza experiment ends on Sunday."

One analyst said the biggest question mark surrounded undecided voters, many of whom backed Syriza and Tsipras in January but have been turned off by his failure to rid Greece of stringent EU austerity conditions in the bailout accord. "These are questions that are not easy to answer and it seems that we won't have a clear image until the last minute," political analyst John Loulis said.

Greece has long been suffering from sweeping spending cuts and a painful six-year recession. Austerity measures being pursued by eurozone countries including Greece have led to a political battle within countries over whether the belt-tightening policies have gone too far at the expense of economic growth. The clashes over economic policies have created political turmoil just as in France, Austria and Italy.
RELATED TOPICS