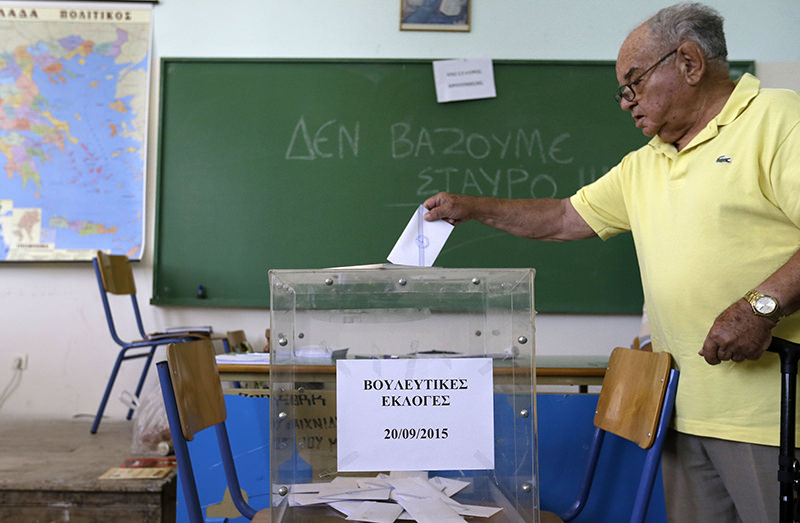 | AP Photo
by Associated Press Sep 20, 2015 12:00 am
Greeks were voting Sunday in their third national polls this year, called on to choose who they trust to steer the country into its new international bailout.

Former Prime Minister Alexis Tsipras' left-wing Syriza party, which made pledges to implement austerity measures in return for billions of euros in rescue loans, was marginally ahead of the rival center-right New Democracy in opinion polls leading up to the vote.

But the surveys, which showed many of the 9.9 million voters were undecided until two days before the vote or might abstain altogether, indicated the winner would not have enough votes to form a government alone.

Early turnout appeared low Sunday a warm summer day that could tempt vote-weary Greeks to opt for the beach instead of casting yet another ballot.

Tsipras, 41, triggered the election by resigning barely seven months into his four-year term, after facing a rebellion within Syriza over his policy U-turn in accepting the spending cuts and tax hikes stipulated by the bailout. Tsipras had won January elections on pledges of abolishing such measures, tied to Greece's first two bailouts.

He has argued he had no choice but to accept the demands of European creditors for more tax hikes and spending cuts in return for Greece's third rescue, a three-year package worth 86 billion euros ($97 billion). He had vowed to repeal the measures imposed in return for the country's first two bailouts and despite winning a referendum he hastily called July 5 urging Greeks to reject creditor reform proposals.

But without the third bailout, Greece which has relied on international rescue loans since 2010 faced bankruptcy and a potentially disastrous exit from Europe's joint currency.

Tsipras called on Greeks to give the next government a strong mandate that will allow it to govern for a full four-year term and to "continue with the same decisiveness, the same self-denial to fight the battles for the defense of our people's rights, not only in Europe but this time within the country too."

"I am optimistic," Tsipras said after voting in his working class Kypseli neighborhood of Athens. "Tomorrow a new day starts."

The danger of being forced out of the euro and possibly even the European Union itself was on many voters' minds as they cast their ballots.

"My conditions are that we remain in Europe and nothing else, because under no circumstances can we exit," said retiree Elektra Kadydou as she voted in a central Athens polling center.

The campaign has been lackluster and somewhat muted a far cry from the frenetic, high-stakes January campaign, which pitted the anti-bailout Tsipras against centrist parties that argued the deal with other Eurozone countries was the country's best chance for an eventual return to some form of economic normalcy in a country ravaged by recession and with unemployment at around 25 percent.

Now, the policies for whichever party wins have already been set in the form of the bailout agreement, and the anti-bailout camp has been reduced to the Nazi-inspired extreme right-wing Golden Dawn and the new Popular Unity, formed last month by rebel Syriza lawmakers who split from the party and led by former energy minister Panagiotis Lafazanis.

The campaign of Tsipras' main rival, New Democracy's 61-year-old Vangelis Meimarakis, has centered on a return to stability. He painted Tsipras as a reckless, inexperienced politician who led the country toward a potential catastrophe and introduced strict banking restrictions in an effort to stem a bank run.

Syriza's campaign has focused on doing away with the staid and often corrupt politics of the past.

The government that emerges will have little time to waste. Creditors are expected to review progress of reforms as part of the bailout next month, while the government will also have to draft the 2016 state budget, overhaul the pension system, raise a series of taxes, including on farmers, carry out privatizations and merge social security funds.

It must also oversee a critical bank recapitalization program, without which depositors with over 100,000 euros ($113,000) in their accounts will be forced to contribute.

Polls have indicated no party is anywhere near the levels needed for an overall parliamentary majority of 151 seats in the 300-member legislature, even with the 50-seat bonus given to the winner, and a three-party coalition would likely be required. That should be achievable with help from two centrist pro-European small parties: the formerly mighty socialist PASOK, and relative newcomer To Potami, or The River.

Speaking after casting his ballot, To Potami leader Stavros Theodorakis urged Greeks not to abstain, and said the prospect of a repeat election must be avoided. That would occur if no parties manage to agree on forming a coalition government.

Golden Dawn, whose leadership is on trial on charges of running a criminal organization, has been consistently polling in third place, but would not be approached by any of the other parties to form a coalition.

Nine parties have a chance of reaching the 3 percent threshold needed to enter parliament. The total number of parties getting in will affect seat distribution the more parties, the fewer seats for the winner, increasing the need for one or more coalition partners.