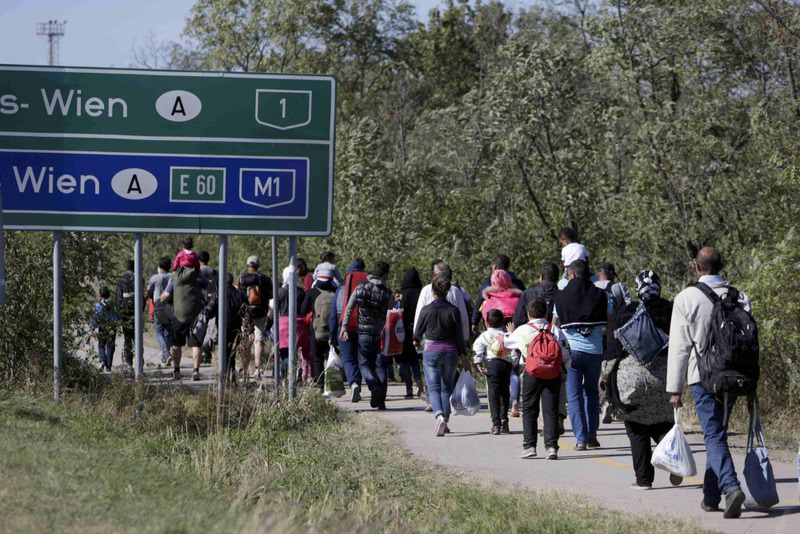 Refugees walk toward the border crossing with Austria in Hegyeshalom, Hungary.
by Daily Sabah with Agencies Sep 23, 2015 12:00 am

Amid divisions between EU countries over obligatory refugee quotas, Eastern European EU states are still standing firm against the quotas. The UNHCR has urged EU states to act in solidarity in their response to the crisis, saying it is the only way to resolve it

Ahead of emergency EU talks the U.N. refugee chief called on EU states yesterday to show solidarity in their response to the continent's worst migration crisis since World War II. "There is no way to resolve a crisis of this dimension if each country acts alone and acts solely on its own interests," United Nations High Commissioner for Refugees (UNHCR) Antonio Guterres told Portuguese broadcaster RTP.

"Hundreds of thousands of refugees have arrived in Europe since the beginning of the year," Guterres said, a former Portuguese prime minister. "But the European Union counts 500 million inhabitants. If there was a real policy of solidarity, the problem would be easily handled."

Despite so far failing to reach a deal on the larger figure, EU ministers last week formally approved a plan first floated in May to relocate 40,000 refugees currently in Greece and Italy. The UNHCR has estimated that at least 200,000 relocation spots will be needed by the end of 2016, and spokeswoman Melissa Fleming said Tuesday that number would likely need to be revised upward. She stressed the urgent need for EU countries to agree on how to manage the crisis "that is becoming increasingly chaotic and unpredictable." "We believe this may be the last opportunity for a coherent European response to manage a crisis that is increasing suffering and exploitation of refugees and migrants and it is also increasing the tension between countries," she told reporters in Geneva. The UNHRC has proposed a number of measures for addressing the crisis, including the immediate creation of facilities in Greece and expanding existing facilities in Italy with the capacity to receive, assist, register and screen the hundreds of thousands arriving by sea.

The UNHCR said yesterday that a total of 477,906 people had made the perilous journey across the Mediterranean so far this year, with an average of 6,000 people now arriving daily on European shores. Nearly 2,900 have died trying, according to the International Organization for Migration.

Guterres also stressed the importance of a proper registration procedure to make it possible to "distinguish the refugees from those who are not." This way, people entitled to refugee status could take part in the relocation program under discussion while those not considered refugees could be "sent back to their countries of origin in a way that respects their dignity," he said. A common solution "demands an investment, a mobilization of resources and a political determination that until now has been lacking," Guterres said. Fleming meanwhile insisted the crisis facing Europe is "primarily a refugee crisis," pointing out that 97 percent of the some 347,000 who have arrived in Greece so far this year have come from conflict zones like Syria and Afghanistan.

While the 28-nation European Union remains deeply divided over how to share the burden of relocating refugees and is convening a series of meetings this week to seek a resolution, Eastern EU countries are sticking to their rejection of accepting fixed quotas of refugees flowing into the bloc, an official said Monday, with Balkan leaders continuing to squabble over how to deal with the influx of people from the south.

"I anticipate that our joint position rejecting the application of quotas will be reaffirmed," Czech Prime Minister Bohuslav Sobotka told the CTK news agency ahead of a meeting of the Hungarian, Polish, Slovakian and Czech foreign ministers. Sobotka said the European Commission had failed to think through the implications of the idea, which has been pushed by Germany in particular, for 120,000 asylum seekers already in the EU to be redistributed across the bloc's other member states. Hungary, Poland and Slovakia also oppose the idea of obligatory quotas, promoted by Germany, which has accepted large numbers of migrants.

The EU's border agency Frontex said last week: "More than 500,000 migrants were detected at EU borders in the first eight months of this year after a fifth consecutive monthly record was registered in August when 156,000 crossed EU borders."
RELATED TOPICS