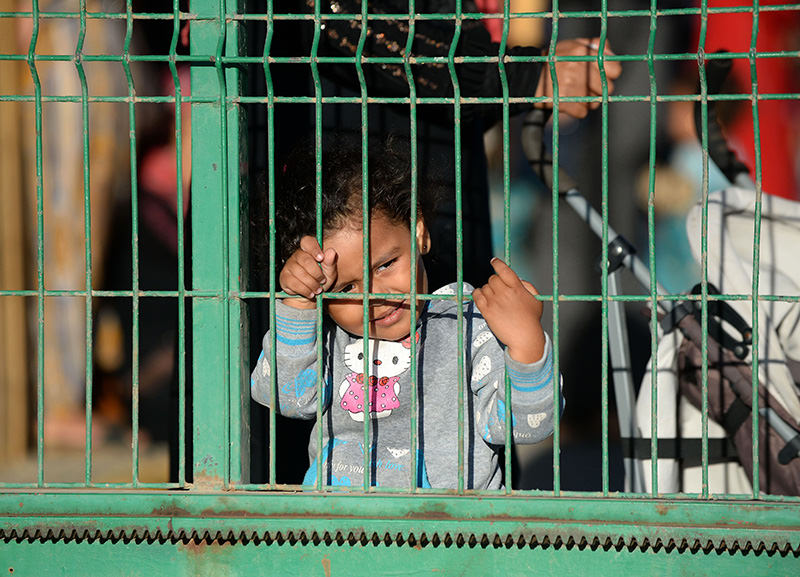 Syrians migrants wait inside a Temporary Centre for Immigrants and Asylum Seekers (CETI) in the Spanish enclave of Melilla on September 16 , 2015 (AFP Photo)
by Daily Sabah with Wires Sep 26, 2015 12:00 am

Several European politicians have made statements, saying that Muslim refugees are threatening the Christian roots of Europe, and now Bulgaria’s Orthodox Church says the country should not let Muslim refugees in

Several European leaders and organization members have made anti-refugee and anti-Muslim statements. Amid the increasing negative stance on refugees, a church in Bulgaria has become involved in the issue by making anti-Islamic statements. Amid increasing Islamophobia in Europe, the church's statements are considered as reflecting religion-based discriminatory policies.

Bulgaria's Orthodox Church called on its government on Friday to not let any more Muslim refugees into the country to prevent an "invasion." The Balkan European Union member has largely been bypassed by the hundreds of thousands of refugees, mostly Syrian, fleeing conflict and poverty, many of whom set off from Greece through neighboring Macedonia and Serbia towards northern Europe. But Bulgaria has still seen Syrians, Afghans and Iraqis cross its southeastern border from Turkey. "We help refugees who have already arrived in our motherland, but the government must absolutely not let more refugees in," the church, which claims 80 percent of the population as its followers, said on its website. "This is a wave that looks like an invasion," it said. It added that the problems in the refugees' countries of origin "must be resolved by those who created them and the Bulgarian people must not pay the price by disappearing."

About 13 percent of Bulgaria's population are Muslims, including ethnic Turks, Bulgarians who converted to Islam during five centuries of Ottoman rule, and some Roma. Bulgaria was accused of trying to ethnically cleanse its Muslims shortly before communism fell in 1989, when around 360,000 Muslim Bulgarians fled to Turkey. Nearly half of them later returned when the country embraced democracy.

European far right parties have called refugees streaming into the region "terrorists," a "ticking time bomb" and a Muslim "invasion" that will bankrupt nations and undermine the continent's Christian roots.

Bulgarian Prime Minister Boyko Borisov said Friday he was "concerned" over a potential massive influx of refugees in the coming months. "I'm scared and the Bulgarian people are scared, if only where religions are concerned. We are Christian, they are Muslim," he said.

Previously, several European officials made similar discriminatory statements on the refugees. Last week, Edmung Stoiber, the honorary chairman of the Christian Social Union in Bavaria (CSU), told the Bild newspaper that he refuses to adopt Merkel's remark that "Islam belongs to Germany."

Anti-immigration ideology and xenophobia have become more visible in the country as a result of the efforts of political parties like the NPD and Alternative for Germany (AFD), as well as anti-Islam and anti-immigrant initiatives like Patriotic Europeans Against the Islamization of the West (PEGIDA), which have staged anti-immigrant rallies and drawn thousands of people throughout Europe, especially in Germany. Attacks against refugees and asylum centers in Germany have increased sharply over the past year. Officials say there were around 202 such attacks in the first six months of 2015, as many as during the whole previous year.

At the beginning of September, Australian Prime Minister Tony Abbott came under mounting pressure to increase Australia's intake of Syrian refuges and to give priority to Christians. European Union member Greek Cyprus also said it would be willing to take in up to 300 migrants fleeing upheaval in the Middle East under new EU quotas, but would prefer them to be Christians. Hungarian Prime Minister Viktor Orban also warned Europe that refugees were threatening the Christian roots of Europe. Slovakia will only accept Christian migrants, Ivan Metik, a spokesman for the country's Interior Ministry said last month. He said Muslims would not be accepted as they would not feel at home and it would be hard for them to integrate into society. Daily Sabah contacted the Slovakian Interior Ministry to confirm the claims and in response, the ministry did not deny the claims. The statement said Slovakia has a tiny community of Muslim people and does not even have a mosque, which is why they believe it will be a problem for Muslims to integrate into the Slovakian community, which is not necessary for a refugee who just seeks safe shelter.

The turmoil in the Middle East and the five-year war in Syria have led many people to flee the conflict in an attempt to seek security and shelter in a more prosperous and peaceful country, such as in Europe. More than 380,000 people have arrived in Europe by sea this year, new figures from the UN's refugee agency UNHCR showed Tuesday, including close to 260,000 who landed in Greece and 121,000 in Italy. Many are fleeing war and poverty in the Middle East, particularly war-torn Syria, as well as Africa and Asia in search of a better life in Europe, with most headed for top economy Germany.
Last Update: Sep 27, 2015 4:14 pm
RELATED TOPICS