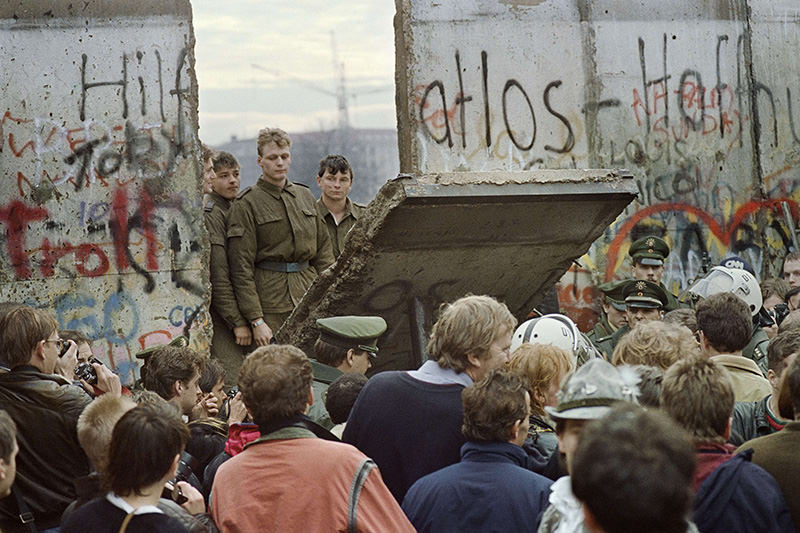 A Photo showing border guards demolishing a section of the wall separating East and West Germany in November 1989 (AFP Photo)
by Associated Press
Oct 03, 2015 12:00 am
Germany marks a quarter-century as a reunited nation on Saturday, with two leaders from the formerly communist east heading a country that increasingly asserts itself as Europe's political heavyweight and now faces a new challenge in a refugee influx that will demand deep reserves of resourcefulness and patience.

West and East Germany united on Oct. 3, 1990, capping a process that started less than 11 months earlier when the east's communist leadership opened the Berlin Wall under pressure from massive demonstrations. Evening out the differences between east and west has been a far slower process, and some inequalities persist even now.

On the whole, however, "things worked out well so many people pitched in, showed verve, began to learn new jobs," Chancellor Angela Merkel, who grew up in the east and entered politics as communism fell, said in a video message ahead of the anniversary.

Joachim Gauck, Germany's president since 2012, is another easterner, former pastor and pro-democracy activist.

In a speech at this year's unification celebrations in Frankfurt, Gauck compared the integration of hundreds of thousands of newly arrived refugees to the task of reuniting East and West Germany 25 years ago.

"Like in 1990, a challenge awaits us that will keep future generations busy," he said. "But contrary from before, what did not belong together up to now, should now grow together."

Gauck's quote came in reference to a famous expression by former German Chancellor Willy Brandt who in 1989, after the fall of the Berlin Wall, said of divided Germany that "now what belongs together, will grow together."

Since reunification, some 1.5 trillion to 2 trillion euros ($1.7 trillion to $2.2 trillion dollars) have been funneled into the east to help bring the region up to speed after its outmoded industry collapsed. A steady post-1990 drain of people from east to west appears finally to have been stemmed, with more people moving east than the other way for the first time in 2013.

Even though unemployment remains higher in the east than the west at 8.7 percent (an enviable figure for many European countries) compared with 5.6 percent the gap has narrowed. Former Chancellor Helmut Kohl's promise to easterners that they would live in "blooming landscapes" no longer looks far-fetched.

"This is true for many parts of former East Germany," said prominent German historian Heinrich August Winkler. "The beautiful countryside of the Mecklenburg lake district, and the Baltic Coast, as well as the cleanup of the polluted industrial areas in Saxony and elsewhere, a lot has happened there."

"The economic disparity between east and west is also a lot lower than it used to be," he added. "But that's no reason to be smug. The absence of large, productive companies in eastern Germany shows that a lot more could be done."

Those concerns apart, Germany has cemented its place as Europe's biggest economy and, in the past few years, has shown increasing ambition as a political and diplomatic heavyweight.

Merkel has been a leading advocate of the reforms and spending cuts demanded of countries such as Greece in exchange for aid in Europe's debt crisis. On the diplomatic front, she and her government also have played a leading part in tackling the crisis over Russia's actions in Ukraine after years being perceived as balking at a front-row role.

Gauck last year said that Germany should make an earlier and more decisive contribution to preventing conflicts and "must also be ready to do more to guarantee the security that others have provided it with for decades."

This year, Germany has sought to take the lead so far with little success in persuading Europe to embrace the task of taking in refugees from Syria and elsewhere and share the burden. The flow of people to Germany, a favored destination, gathered pace last month when Merkel decided to allow in migrants who had piled up in Hungary.

Merkel is sticking to a confident message that Germany will cope as authorities struggle to keep tabs on the newcomers and house them. Officials expect at least 800,000 to arrive this year, though not all will be allowed to stay.

The job of integrating them into society and the workforce lies ahead, and Merkel says memories of reunification could help.

"The experiences of German unification give us the feeling and the confidence that we can deal successfully with the tasks that face us however big they are," Merkel said Thursday.

"That also goes for the Herculean task that moves us at the moment and demands a national effort of us: the many, many people who are seeking shelter with us in Europe and Germany."
Last Update: Oct 03, 2015 7:43 pm