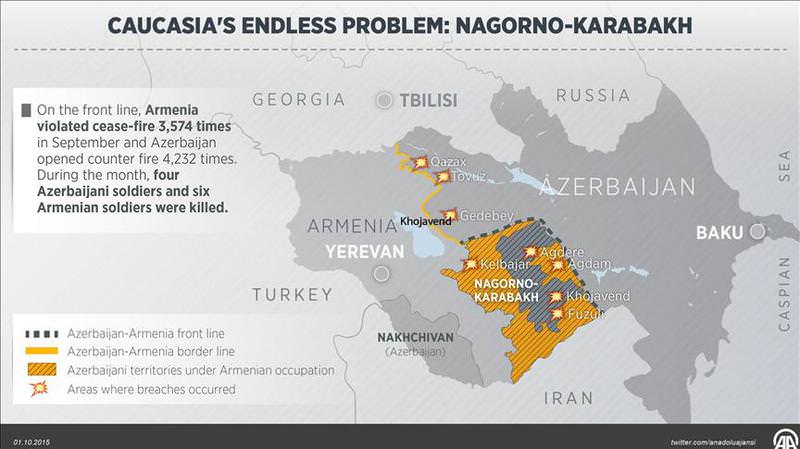 Since the tensions between Armenia and Azerbaijan over the decades-long troubled region Nagorno-Karabakh, which is currently under Armenian occupation, increased over the past weeks, the regional actors including Turkey and Russia may mediate peace talks

The conflict between Armenia and Azerbaijan has escalated dangerously in the past few weeks. The Organization for Security and Co-operation in Europe (OSCE) warned on Friday that the conflict had reached a new stage of escalation. From Sept 25-27, Armenian and Azerbaijani border troops have frequently exchanged fire, despite a ceasefire initially reached in 1994 after years of war between the two countries. The decades-long dispute erupted over the status of Nagorno Karabakh, a mountainous enclave which broke away from Azerbaijan in 1991, with Armenian military support. The peace process mediated by the OSCE Minsk Group has yet to reach implementation. According to Azerbaijan's Defense Ministry, Armenia violated the ceasefire 3,574 times in September 2015 and Azerbaijan returned fire 4,232 times. Azerbaijan says four of its soldiers died and 21 Armenian soldiers were killed in September; Armenia's official statements say six of its troops were killed and 16 others injured in the same period. Three Azerbaijani civilians were reportedly injured when forces suspected of being from Armenia opened fire on a village along the Armenia-Azerbaijan border on September 1. According to the Azerbaijani Defense Ministry, two women and a girl were injured when Armenian soldiers shot at a wedding tent in Kapanli village.

In the past years, the sides used minor-caliber weapons on the front line; however, they recently use RPG-7 and AGS-17 type grenade launchers, 60 to 82-mm mortars, 107-mm multi barrel artillery rocket and 120-mm D-30 howitzers, according to data from Azerbaijan's official institutions' statements.

The escalation could spur intervention either by the U.N. or by Russia. Turkey could also play a role in mediating the conflict. Turkish Prime Minister Ahmet Davutoğlu, in a speech to the U.N. on Sept. 28, said that "This region, regrettably, continues to be destabilized and weakened by three major conflicts of the greater OSCE area. All remain unresolved. We are determined to continue our efforts to facilitate a peaceful resolution to these conflicts on the basis of respect for sovereignty, territorial integrity and inviolability of the internationally recognized borders of the Republic of Azerbaijan." Azerbaijan President Ilham Aliyev told the press on Sept. 28 that the "current status quo is unacceptable". What's more, international mediators in the past have not taken this conflict seriously. He called for a renewed effort at negotiations. Azeri Foreign Minister Elmar Mammadyarov has called for the intervention of the U.N. to mediate the conflict. "If the negotiations on the resolution of the Nagorno-Karabakh conflict fail to bring the complete and unconditional withdrawal of Armenian troops from the occupied territories of Azerbaijan, the country's authorities will use the U.N. Charter to ensure the restoration of its territorial integrity," Azerbaijani Foreign Minister Mammadyarov said during the General Debate of the 70th session of the U.N. General Assembly on Sept. 25. Mammadyarov stressed that for effective confidence building, it is critical, first and foremost, to implement without further delay the plan of withdrawal of the armed forces of Armenia from the occupied territories of Azerbaijan. He pointed out that the major cause of those incidents is the continuing unlawful presence of the Armenian armed forces in the occupied territories of Azerbaijan.

Azeri analysts stressed the importance of Russia's role in mediating the conflict. Parvin Darabadi, an Azerbaijani conflict analyst based in Baku, said: "In order for the region to become stable, it is necessary to resolve the conflict effectively. The Nagorno-Karabakh conflict could be resolved through the active participation of Russia and Turkey in the negotiations as two countries directly involved in the region and which are pursuing a compromise. Only Russia and Turkey will be able to influence the negotiating process meaningfully, because it is those countries that have their own geopolitical interests in the region," she told the Sputnik Azerbaijan website on Wednesday. But Azerbaijan needs a positive outcome of the Nagorno-Karabakh settlement before it can begin any serious efforts to meet Russia's interests, pointed out Azeri commentator Mubariz Ahmedoglu, director of the Centre for Political Innovations and Tactics, in an article published today in Trend. "Therefore, Russia must necessarily resolve the Nagorno-Karabakh conflict, based on the norms of international law in favor of Azerbaijan. Armenia will remain dissatisfied anyway. However, Russia, together with Azerbaijan, can compensate for the dissatisfaction so that Armenia may start a period of economic prosperity and social well-being," Ahmedoglu said.

Armenia's assumption of the chairmanship of the Collective Security Treaty Organization (CSTO), whose six members are Russia, Kazakhstan, Kyrgyzstan, Belarus, Armenia and Tajikistan, in mid-September has led it to raise its expectations and has prompted it to demand further support from Russia. The CSTO primarily draws its funding from Russia. Armenian politician Daniel Ioannisyan told the Lragir website on Sept. 25: "Armenia is expecting support, first, at the level of the strategic alliance it has entered into with Russia, and also under the collective security pact which is under the Russian umbrella," Ioannisyan said. Moscow, for its part, is prepared to offer incentives to Azerbaijan to persuade it join the Eurasian Economic Union, Ioannisyan said. "Russia is encouraging Azerbaijan to accept its mediation in resolving the long-standing dispute with Armenia. If Azerbaijan agrees, this will help Moscow reduce the authority and the credibility of the OSCE Minsk Group," he explained. Russia sees this as an opportunity to expand its influence, Stepan Safaryan, who heads the Armenian Institute of International and Security Affairs, told Armenia Today on Sept 22. Armenian political scientist Ara Papiyan told the Lragir website on the same day: "Russia seeks an expanded presence in the Caucasus, influence in the region, and a decisive role in a settlement between Azerbaijan and Armenia." "The CSTO could be forced to mobilize resources to Central Asia. At their summit in [Tajik capital] Dushanbe, the heads of the Central Asian countries discussed this possibility. In all likelihood, in the near future, they will seek to bring the resources of the CSTO to their region," Papiyan said.

Armenia has a base where up to 3,000 Russian troops are present, and this acts as a deterrent to increasing pressure from Azerbaijan. The Armenian president has offered to establish a training center for a peacekeeping force made up of the members of the Collective Security Treaty Organization which he made during the CSTO summit in Dushanbe on September 15. Under a pact signed in August 2010, the 3,000 Russian ground and air forces stationed in Armenia's north western city of Gyumri near the border with Turkey, has extended their presence in the South Caucasus state from the initial 25 years (1995-2010) to 49 years, i.e. to 2044. "Russia is jostling to expand its footprint in the volatile Caucasus theatre to facilitate a settlement between its strategic partners Armenia and Azerbaijan on its own terms. This would also discourage the Caucasus from warming up to any partnership with NATO, and also frustrate any efforts by the two countries of getting closer to European Union," Artak Zakaryan, head of the Armenian parliament's Foreign Relations Committee, told the Tert.am website on Sept 22. "Russia is also prompting Yerevan to establish a training center for CSTO troops, which will allow Moscow to expand its presence in the Caucasus region," states political scientist Ara Papiyan. "The Armenian proposal [to involve the CSTO] will only help Russia increase its influence and also assume a greater role in the conflict."
RELATED TOPICS