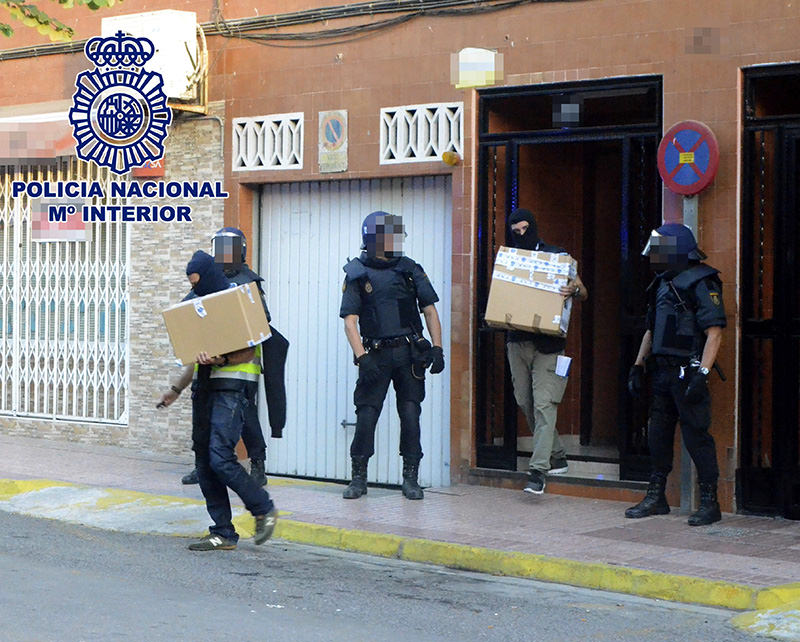 A handout picture provided shows police officers carrying boxes with evidence after a search at the residence of a Moroccan woman arrested for alleged connection with the ISIS group, in eastern Spain, 04 Oct 2015 (EPA photo)
by Anadolu Agency
Oct 04, 2015 12:00 am
Ten people have been arrested in Spain and Morocco for allegedly recruiting, indoctrinating and sending foreign fighters to fight with extremists in the Middle East.

In a joint effort between the Spanish National Police and the Moroccan DGST (domestic intelligence agency) four were arrested in Spain and six in Morocco.

"The operation is a firm blow to the networks that dedicate themselves to attracting, radicalization and recruiting people to form part of Daesh [Arabic acronym for ISIS]," the minister told the media.

In Spain, police arrested two women and two men in the regions of Toledo, Barcelona and Valencia.

In Morocco, the six were arrested around Casablanca.

According to the mayor of Xeraco, Valencia, where police operations lasted from 5.30-9 a.m. local time [0330-0700 GMT] Sunday, one of those detained is a girl around 20 years old, who is believed to have been living with her parents.

Fernandez Diaz said that those arrested have a "very direct" link with ISIS.

According to figures from the Interior Ministry, by the end of September Spanish security forces had been involved in arresting 71 suspected militants, up from 46 in all of 2014.

Authorities suspect that more than 100 people from Spain have gone to Syria and Iraq to fight with extremist groups.

Fernandez Diaz said that currently 80 percent of the recruitment process for terrorists is done online and around 20 per cent happens in physical locations like religious centers or prisons.

He added that three years ago, those percentages were inverted.