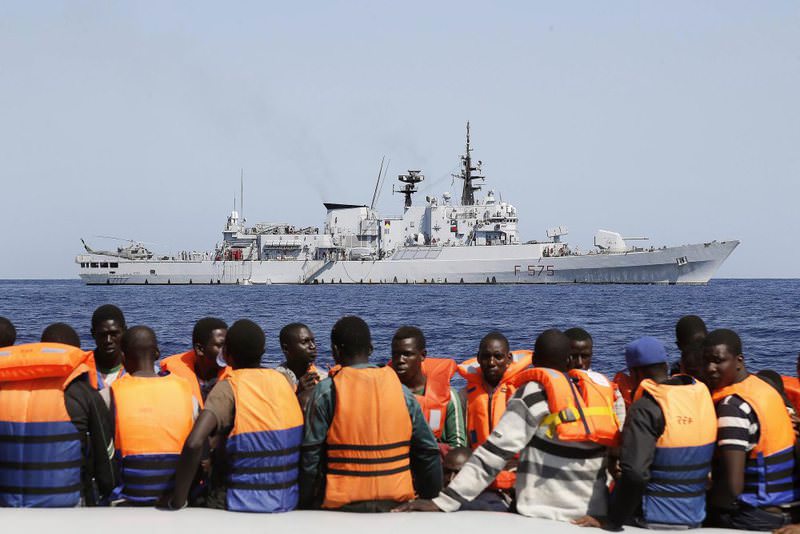 Sub-Saharan migrants (front) being transported to an Italian Navy vessel (background) during a rescue operation in the southern Mediterranean Sea, Sept. 6, 2014.
by Daily Sabah with Agencies Oct 08, 2015 12:00 am

The EU has launched a military operation to arrest traffickers who send migrants off on the perilous journey. Meanwhile, debates over whether the operation will be beneficial, especially for refugees, remain

An EU military operation to catch migrant traffickers began Wednesday with European warships patrolling international waters on the Mediterranean to arrest smugglers dubbed the "mafia of the sea." High Representative of the European Union for Foreign Affairs and Security Policy Federica Mogherini announced last month that EUNAVFOR MED, an operation launched to dismantle the network of smugglers facilitating the migrant boat crisis, was to enter its second phase. The first phase essentially entailed compiling and analyzing information on the trafficker networks and has been up and running since June. Six ships are already in place in international waters off the coast of Libya – the departure point for many of the migrant boats – including an Italian aircraft carrier, a French frigate and one British, one Spanish and two German ships.

At least three other vessels supplied by the Belgian, British and Slovenian navies are expected to arrive in the area at the end of October to complete the fleet, which also includes four aircraft and 1,318 personnel. On board the Werra, one of the German ships taking part, the 100-person strong crew has already carried out several exercises, including a simulation of an attack carried out by traffickers, to which they responded by opening fire. For this mission, the team includes sailors trained in boarding ships on the high seas, the Werra's captain Stefan Klatt told Agence France-Presse (AFP).

The EU gave the go-ahead for the operation in international waters in September, but its ships are not, for now, allowed to pursue traffickers into Libyan waters. "We follow the traffickers and want to arrest them and seize their ships," the captain said, adding that he will get as close to Libyan waters as he can.Over the past few weeks, EUNAVFOR MED has identified 20 escort boats – the type used by traffickers who take migrants out to sea in fishing boats and dinghies before leaving them and returning to Libya. It could have taken action against all of the 17 Libyan and three Egyptian escort boats spotted had phase two of the operation already been up and running.

On the map, the operation will patrol over 10 areas off the Libyan coast with four along the 12-nautical mile mark that separates international from Libyan waters, and the others further out to sea. The whole of the northwestern coast of Libya from the Tunisian border to Sirte will be on lockdown, apart from an area directly in front of Tripoli, which will be left open to prevent a total maritime blockade.

Traffickers hoping to spirit migrants out of the area by boat will still run into EUNAVFOR MED once they get into international waters. But the operation will need a green light from the United Nations Security Council and Libyan authorities to venture into Libyan waters, authorization that appears to be still some way off. It will not stop the Werra and others from getting as close as they can, particularly by night, to collect information, survey the area and listen to marine traffic and radio frequencies used by smugglers. For all its detailed preparations ahead of the launch, "we clearly lack men close to the network" of traffickers to help break it, one official said on condition of anonymity.

According to the International Organization for Migration (IOM), more than 550,000 people have landed on Italian and Greek shores this year and 2,987 people have died attempting the crossing, the biggest influx of sea migrants and refugees into Europe since the end of World War II. The total number of deaths worldwide has exceeded 4,000 so far. Nearly 100 migrants are reported to have died in the Mediterranean off Libya since last Sunday, the IOM said on Tuesday, citing unconfirmed reports from the Libyan Red Crescent. According to the IOM, Greece remains by far the destination that has received the most refugees, with more than 421,300 arriving in the country, the majority of them Syrian refugees who have been fleeing persecution from Syrian President Bashar Assad's regime and the Islamic State of Iraq and al-Sham (ISIS) since 2011.

Several rights groups, international organizations and world leaders have been repeatedly emphasizing the necessity of international collaboration and a comprehensive response to the crisis. Compared to Syria's neighboring countries, the U.N. High Commissioner for Refugees encouraged European countries to do more to share the burden of the international community in the migrant crisis. Syria's neighboring countries – Turkey, Jordan, Lebanon and Iraq – shelter most Syrian refugees, with Turkey having taken in nearly 2 million.
RELATED TOPICS