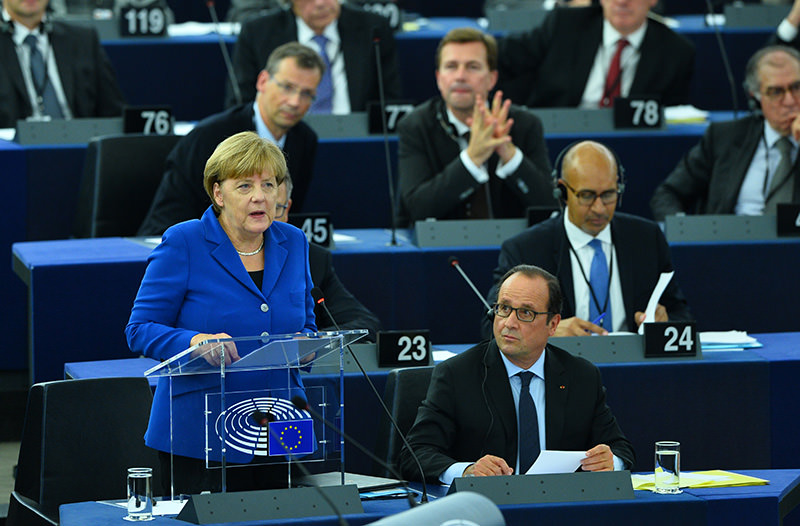 | AA photo
by reuters
Oct 08, 2015 12:00 am
German Chancellor Angela Merkel said on Wednesday that Turkey's help was needed to stem the flow of refugees to Europe but that this hadn't changed her view that Ankara should not become a member of the European Union.

"I have always been against EU membership, President [Tayyip] Erdoğan knows this, and I still am," Merkel told a talk show on German public broadcaster ARD.

Merkel was an outspoken opponent of Turkey joining the EU before she took power in 2005, advocating instead a "privileged partnership" that stopped short of full membership.

But she has avoided using that term or stating her opposition too loudly in recent years, maintaining instead that membership talks between Ankara and the EU, which were launched shortly before she took office, should proceed but have no pre-determined outcome.

Turkey's bid has stalled in recent years, but now Europe is reaching out to Turkey again, hoping that it can help with the record flows of refugees from its neighbor Syria and other war-torn countries in the Middle East.

President Erdoğan visited Brussels on Monday and was presented with a draft action plan under which Europe would offer more funding for Syrian and Iraqi refugees living in Turkey.

"We need to talk to Turkey about sharing the burden better," Merkel said. "That will mean that we give Turkey money ... and that we fulfill certain demands that Turkey has, such as easing visa restrictions."
Last Update: Oct 08, 2015 12:48 pm